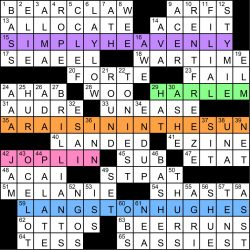 Hello there, everybody! I hope you are all doing great as we officially put January in the rearview mirror.

Can’t describe enough how much I love today’s tribute puzzle, honoring LANGSTON HUGHES (59A: [“I, Too” poet born on 2/1/1901 (or 1902, per some sources)]). Mentioned in the grid is a neighborhood located in the city I live in now, a city located in the state I used to live in, and two timeless works…let alone the inspiring poem/poignant reminder that is the poem mentioned in the reveal. The work I hold most dear from Hughes is the poem Justice, which, no matter what era of America you are in when you read it, would always be timely.

Keeping in line with the poetic theme, there’s the slick way TONIEST, smack dab in the middle of the grid, is clued (22D: [Most like “Beloved” author Morrison?]). Along with the themes, we have a couple of 10s going down, with RENT FREEZE making me think of the numerous people with families who have lost and/or about to lose their protections from evictions after moratoriums on those lapse and federal assistance dries up (10D: [Halt on apartment fee increases]). Can’t say that I’ve ever had a BEAR CLAW before, though, if I remember correctly, there’s almond extract that’s used in the snack, which probably would make me not want to have it anytime soon (1A: [Fan-shaped pastry with a “grizzly” name?]). I’ll just stick with my cannolis that I get from Court Street in Brooklyn or on Arthur Avenue in the Bronx as my go-to pastry!

“Sports will make you smarter” moment of the day: SHUE (56D: [“Leaving Las Vegas” actress Elisabeth]) – Though you won’t see him on any NBA’s all-time greatest players or coaches list, former NBA player and coach Gene Shue has had a big impact on the game, and the impact arguably continues to this day. As a professional player in the 1950s, Shue was credited with inventing the spin move, a 360-degree turn while still maintaining one’s dribble that many basketball players still use today. Shue was a five-time NBA All-Star while with the Fort Wayne (now Detroit) Pistons, each year from 1958 to 1962, and then translated his basketball prowess on the court to the sideline in later years. Shue won NBA Coach of the Year on two occasions, with the Baltimore Bullets in 1968 and Washington Bullets (same franchise) in 1982. 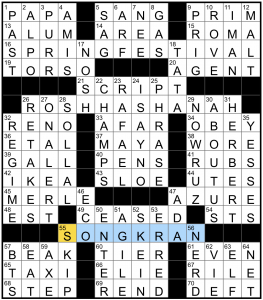 February 1 brings us the start of the Chinese New Year, aka SPRING FESTIVAL, aka Lunar New Year for some other Asian countries. (Spring Festival? But it’s winter!) Zhouqin brings us a gallery of Asian New Year celebrations in this 14×16 grid with left/right symmetry:

There’s ROSH HASHANAH in September for our Jewish friends (and I’m grouping this with Asian New Years since Israel is in Asia).

SONGKRAN is Thailand’s New Year celebration; this one was new to me so I peeked at the Wiki and learned it involves “public water fights framed as ritual cleansing,” what fun!

Korean New Year is SOLLAL (or Seollal), also on our calendar’s February 1 this year. And moving to Iran, we celebrate NOWRUZ, with the new year beginning on the spring equinox, which is lovely! For this Midwesterner, January and February really ought to be the end of the year, a bunch of winter weather to endure as we wait for spring’s arrival. I hereby move to have the U.S. shift its New Year’s celebrations to late March!

An educational holiday theme, for a change. I can dig it. Zhouqin, of course, nails down easy crossings so that a Tuesday puzzle with some themers that might be unfamiliar to non-Asian American solvers can still feel like a Tuesday puzzle.

Fave fill: RAFAEL Nadal, and an ABOUT US section of a website (I actually look at those sometimes when working on crossword clues). Least fave: I SAY NO feels a little too non-idiomatic to me.

Let’s see. What have we got on the docket today? Why, it’s the next Kabigting! (And I’m certain he’s never heard that joke before.) 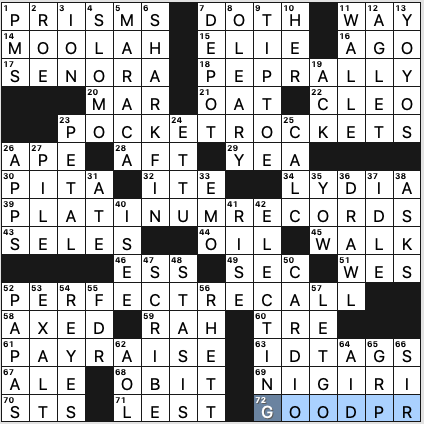 Similar to yesterday, there’s nothing groundbreaking here, but it’s a clean, solid puzzle nonetheless. The theme entries are well chosen and evocative.

SHARK FIN stands out as the shiniest bit of fill. Its grid counterpart is ELECTING which isn’t so shiny, no doubt due to the fact that it’s constrained by three theme entries. 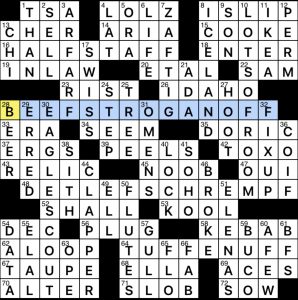 Hi everyone! It’s Erin Milligan-Milburn back after a long hiatus, blogging the Jonesin’ Crossword! This week’s puzzle highlights F-Enders, or two-word entries with both words ending in the letter F.

I feel like this puzzle’s difficulty is going to play very differently for people depending on where their pop culture knowledge lies. DETLEF SCHREMPF was a completely new name to me, and I knew TUFF ENUFF from one of my first cassette tapes as a child containing another Fabulous Thunderbirds song, but I don’t know if the band is famous enuff for most people to get this entry without the crossings.

THEME: Phrases where one letter takes the place of a word due to its shape. 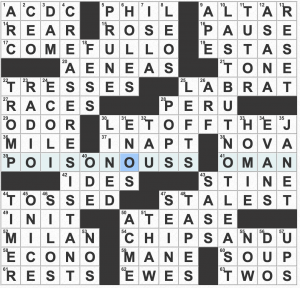 Very cool idea today, though admittedly I didn’t fully get it until the end. Had trouble mostly because I uncovered the letter U so frequently that I thought that letter was part of the theme I had to figure out. I determined CHIPS AND DIP had to be right, then tried subbing the word DIP in for the first and third themers where the U was. Duh. The correct way of parsing it is so much better. Phew!

Love the consistency, that each letter is at the end and that they are all different letters.

Way harder than normal, no? ENOS and JANET EVANS were both new to me, and crossing a themer where the theme is not straightforward made that quite difficult. And ENOS crosses two themers! Risky to do that imo.

Personally, I’m not a big fan of grid spanners that pose as themers as I find it confusing. Especially when one of them is clued punnily (4D). For me, it makes for red herring, but not in an enjoyable sense.

No real qualms though. This was so well done. Thanks, Paul! Feel like it’s been forever since I’ve seen you! 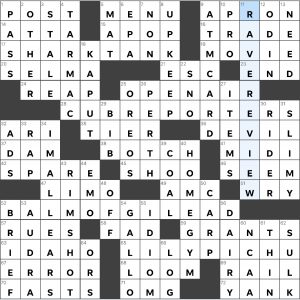 Theme: Adding TIGER before the first word of each themer creates a new phrase

It’s the Year of the Tiger for this year’s Chinese or Lunar New Year! It still took me a while to figure out today’s theme though because I was looking for portions of “year” or “tiger”, and at one point I thought it might be animals, given the first two themers. Turns out that it wasn’t as complicated as I was looking for. SHARKTANK is a show about pitching product ideas to a panel in order to earn funding and for today’s theme becomes TIGERSHARK that sometimes is found in a zoo tank. CUBREPORTERS is a term for new reporters than becomes TIGERCUB, another newbie of sorts. BALMOFGILEAD took me crossings since I’m unfamiliar with it though the cluing helped complete it and becomes TIGERBALM, a soothing salve. LILYPICHU sounds like some sweet music that I need to look into and becomes TIGERLILY, a beautiful flower. Just as with the start of a new year, the title “Year of the Tiger” might be more descriptive than I first realized as well, as TIGER gets added to the beginning or start of each phrase. What a great theme and themers, particularly for today–Happy Lunar New Year!

Stumpers: CARP (unfamiliar with this use), IDIOM (misdirected by trying to come up with a example of the phrase—nice one!), and ITEMS (thinking cars and express lanes on the highway)

As a fun bonus—today’s NYT is also by Zhouqin! Be sure to solve that one too and read Amy’s take on it (above) if you haven’t yet.

Very quickly and just under the wire: each theme answer has ANY somewhere. 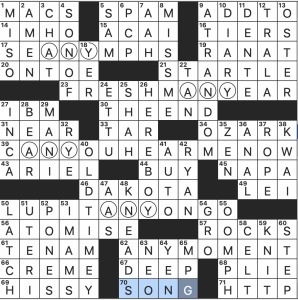 and a revealer at 62a: [“It’s about to happen”….or what each of the four longest answers in this puzzle has?] is ANY MOMENT.