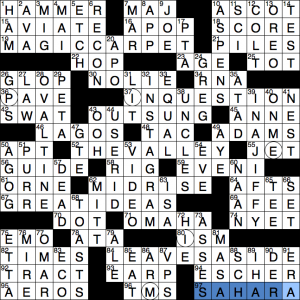 hello and welcome to episode #713 of matt gaffney’s weekly crossword contest, “Who Are You?”. for this week 4 puzzle, the instructions tell us we’re looking for a famous American of the past or present. okay. what are the theme answers? i don’t know. but it’s possible that they are the five longish across answers:

these answers do not appear to have anything in common, unfortunately. IDEAS and ASIDE are anagrams of each other, which is certainly interesting, but considerably less so because there aren’t other anagrams in the other themers.

well, what else is there to go on? i suppose we could look at clues and answers that are famous americans of the past or present. there are, as usual, plenty of them:

there are other entries in the grid that could have been clued as names of people (including, of course, famous americans) but weren’t: EVE, JOE, DER, and HAMMER come to mind. actually, HAMMER is interesting because ESCHER is also in the grid (famous, but not american), and both of them have the initials M.C., just like MAGIC CARPET. this is definitely intriguing, but again, i can’t make it work with the other themers.

on that note, though, it’s definitely true that each of the theme answers is a two-word phrase whose initials are a very common two-letter initialism: MC (as in master of ceremonies, or maurits cornelis), IQ, TV, GI, and LA. ohh, i’m seeing something now: in addition to HAMMER/ESCHER, IQ can be followed by {Take for a spin} TEST, TV can be followed by {Excursion leader} GUIDE or {Prepared} SET, GI can be followed by {Anatomical structure} TRACT or {Mr. Schmo} JOE, and LA can be followed by … hmm. neither CONFIDENTIAL nor GEAR is in the grid. oh, but there’s {Barrister’s subject} LAW and {X, in math class} TIMES. those will do. this does suggest there is one more word that goes with IQ. i guess it could be SCORE, he shouted exultantly.

okay, now what? it’s very unclear what to do with HAMMER/ESCHER, TEST/SCORE, GUIDE/SET, JOE/TRACT, and LAW/TIMES. the first letters don’t spell anything (there’s definitely a dearth of vowels for that). looking at T/S and thinking about famous americans of the past or present calls T.S. ELIOT to mind, but there aren’t any famous americans that go by H.E. or E.H., i don’t think. likewise G.S./S.G.

ah, okay, this is it—back to the grid. if you thought (for some reason!) that there were only fifteen theme entries, look again—there are twenty. for each of those pairs of initials, there’s a three-letter entry in the grid beginning and ending with those initials:

there’s an elegant consistency here: in each case, the first and last letters of the three-letter word appear in the same order as the two letters in the initials appear in the grid. so for example, HAMMER is above ESCHER so it’s H_E instead of E_H. (TEST and SCORE actually intersect each other, but the T is a row higher than the S so it’s T_S.)

anyway, reading off the middle letters we find from these entries gives I.M. PEI, the second-favorite architect of crossword puzzles, and the contest answer. mr. pei is/was certainly a famous american, but is he past or present? let’s get the latest from our correspondent on the ground: 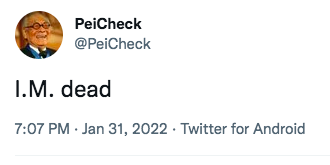 right, past it is.

whew, this was a workout. i really enjoyed this meta—solving it felt very much like following a trail of breadcrumbs. it’s more or less complete coincidence that thinking about entries that could have been, but weren’t, clued as famous americans led me to m.c. HAMMER, but from there, every subsequent aha made me more sure i was on the right track, even when it seemed like there was no way the grid could be hiding yet more theme content.