Theme: CREATED A MONSTER – each multi-word theme answer has a monstrous creature hidden within two of the words that is “created” when you read them together. 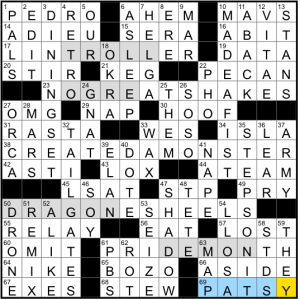 I’m writing this after a full day of competing at Boswords – amazing job done by all the constructors/folks involved in putting the event on! Anyways, Boswords must have been a great warm-up for today’s puzzle, because I got my personal record Monday time. So of course, I’ll say it was the best puzzle ever ;) I really love this theme – the fact that each of the words was different, they all spanned two words, and that the concept had a pitch-perfect grid-spanning revealer elevated it over other hidden words themes. My favorite answer in itself has to be the DEMON hidden in PRIDE MONTH, if only because it feels like a shoutout to the Babadook (iykyk). DRAG ONE’S HEELS worked less well for me, because the entirety of the first word is included in DRAGON and phrases with “one’s” always feel a little contrived to me. But hiding a 6 letter word is no small feat, so props to this answer for doing that!

Theme: Synonyms for “child” are found in the circled squares within familiar phrases. 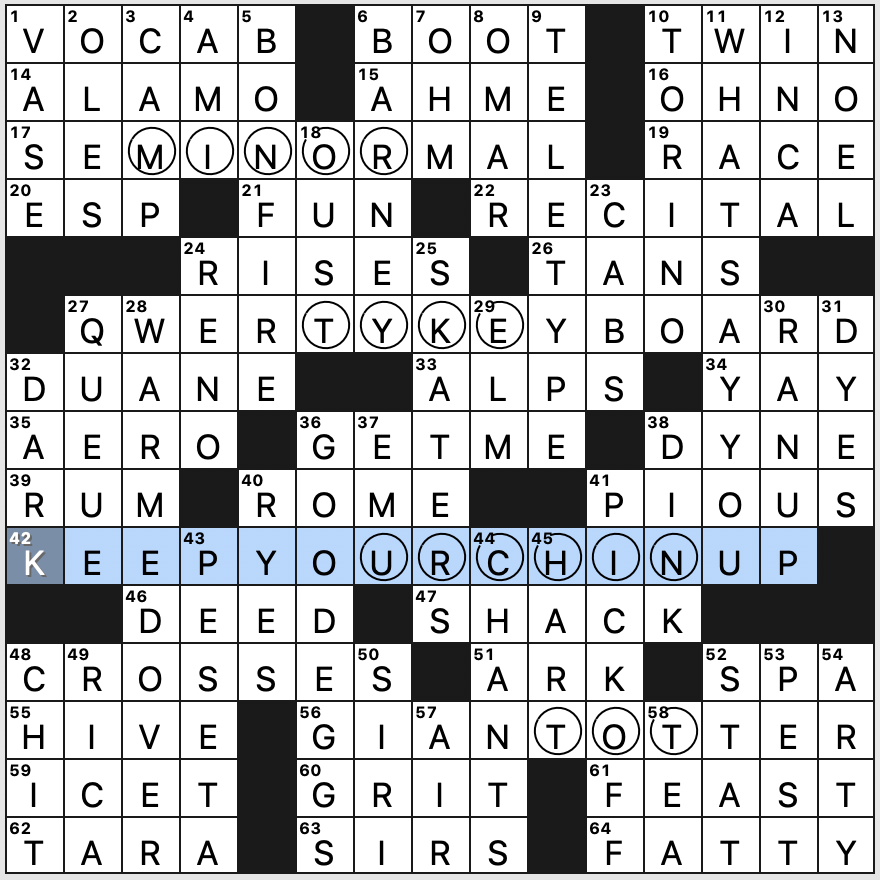 Nothing groundbreaking, but a solid Monday theme. I especially liked the six-letter find in the third theme answer.

I didn’t know there was a giant version of the otter. I’m not sure I’d want to meet up with one in the wild. Although the fellow in the picture looks quite dignified. 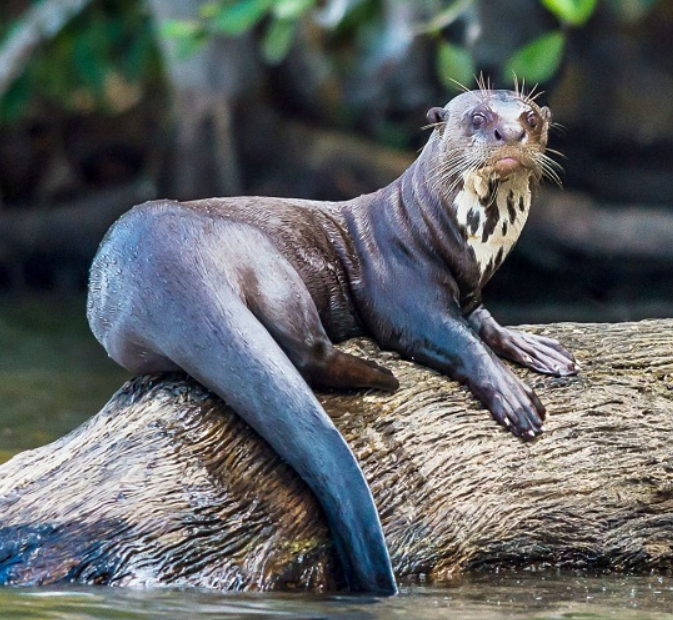 Fun fill in “WHAT SAY YOU?” and WARMED OVER. TELETYPE and GOOD EGGS both feel decidedly old-fashioned. 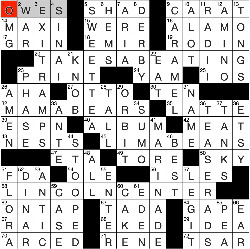 I haven’t enjoyed a Monday this much in a long time. It might sound odd to say “enjoyed” about a puzzle that took me all of a minute forty to solve — I certainly didn’t spend time savoring it — but I mean it! The simplest of themes is elevated by perfect execution. 58A, the revealer [Home of the Metropolitan Opera … and a hint to the “honest” guy hiding in 20-, 32-, and 45-Across] is a rather unwieldy but nicely evocative clue for LINCOLN CENTER. (I was just there a couple of weeks ago to attend an opera for the first time since before the pandemic started, and it was so good to be back!) The LINCOLN CENTER in this case is the trigram ABE, as in ABE LINCOLN, that appears crossing two words in the middle of each theme entry:

What really takes this puzzle over the top for me is how smooth the fill is. There’s not a single entry in the grid that makes me think, “mmm, a little hard for Monday,” and it showed in my solving time.

Whenever C.C. is involved in making a puzzle, I know to expect some evocative food and drink references, and this one has even more than usual: LATTE, CARAMEL, SWEET TEA, CAKE, TALL (clued with reference to Starbucks), YAM, MEAT, PEA, the themer LIMA BEANS, and MARINADE. (Pro tip: Pretty much any time you marinate meat, pat it dry with paper towels before you cook it. Makes for better searing.) So maybe don’t solve this one if you’re hungry, but under any other circumstances, do! Such a fun, breezy Monday! 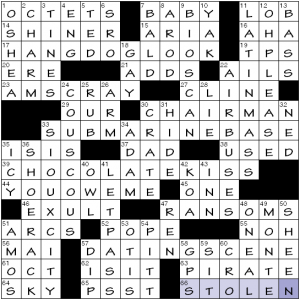 Didn’t catch the theme until finding the revealer, in the final across spot. Turns out that the title is perfect.

As for the solve, the top section of the grid just kept falling under my figurative pen like a house of cards, but the bottom had a tad more structural integrity and I actually had to cross words to navigate it. Overall it was still very much an early-week level offering,

Okay, that’s all I’ve got this morning. 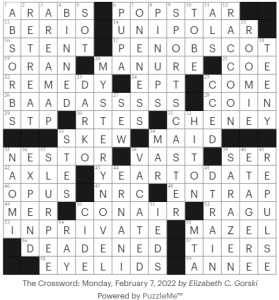 This puzzle’s got a lot of people, places, organizations, and title words in the grid, which means I enjoyed it, even with the pause of not knowing BERIO ([Pioneering electronic-music composer Luciano]) at all. It also means that those solvers who don’t remember names and ABSORB{S} pop culture might be cranky about this one. Horse Funny CIDE and director TOBE Hooper are some unusual spellings.

Could do without RTES and STES, and I’m never pleased to see SOT.

Theme: The right-most word of each phrase can use the prefix “trans” to make a new word. Super awesome title on this one! 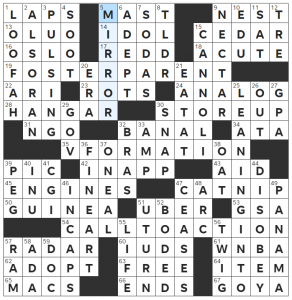 Good morning, friends! Congratulations Ada, on her USA Today debut! This is my favorite type of asym grid, where it’s only asymmetrical to accommodate the themies– in this case, V FORMATION is centered as much as it can be given that it has an even number of letters. 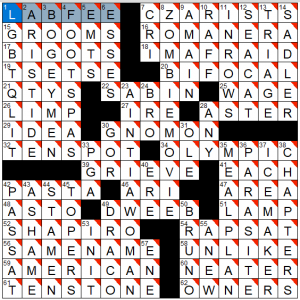 Just one of those days where the completed puzzle sat solved on my work computer all day and I never found a breather to write it up. Some thoughts on this difficult four-corners grid (with an interesting center area) from BEQ.

Super-duper fave: AINT I A WOMAN [23d Words of Truth]

Didn’t quite land: OLE [31d Miss descriptor]. I suppose it is an adjective in the phrase, but it’s not really a phrase that’s ever split up, nor are there other Mississippis/Misses that take different descriptors.

We don’t talk about: BRUNO.