This month, we are asked, What fourth theme phrase is hidden in this puzzle? There were three long theme entries, each comprised of four words that began with the same letter: 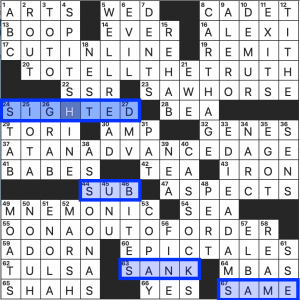 I looked for four words that began with the same letter to form the hidden phrase. SUB and SANK jumped out immediately (“down periscope”), plus SIGHTED and SEA (unfortunately). Those were four related words, but “SIGHTED SUB SEA SANK” (grid order) isn’t a phrase. I knew Peter wouldn’t jumble four words together: I was missing something. I searched the grid for a while, looking for other words that began with S and nothing clicked. I Googled “SIGHTED SUB SEA SANK” and this Wikipedia article was the first hit, leading to our contest solution SIGHTED SUB SANK SAME.

I didn’t remember this historic story, but my solving pal Gideon had, so that’s on me. I had a neat “aha” moment reading about it: 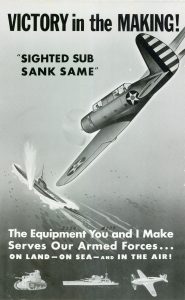 It was just 80 years ago today, January 28, 1942, when an American Lockheed Hudson, patrolling the waters off of Newfoundland, spotted the periscope of a German U-Boat. Immediately, Donald Mason, the pilot, took action and dived on the unsuspecting craft. Two depth charges straddled the conning tower, lifting it up above the waves.

Afterwards, an oil spill was visible, but the ensuing dimness of the evening forced the crew back to base. It was later reported after the war that no evidence of a sub sinking had occurred.

However, legend and lore can sometimes be better than actual fact, for after the action, Mason had radioed back, “Sighted Sub, Sank Same”. It was this short and to the point radio message that rallied not only our Nation, but that of many of our allies during the war, especially in the beginning, when things were not looking so good for the Allies in early 1942. For his action, and quick phrase, Mason would be awarded the Distinguished Flying Cross.

We’ll end with this fun cover of Yellow Submarine by Adora Makokha.