This week we’re looking for a phrase of 11 letters. There were two long horizontal entries (SUGARSUGAR and HITMUSICAL) but I spotted no obvious theme. Mike often puts a clue in the center or final horizontal entries: not this time. The grid yielded no signal, so I turned to the clues. The clue “Blue hue” appeared twice (for AZURE and TEAL), plus the grid entry SLUES, but that rabbit hole died quickly.

I built the following sequence in my notes: EARS->PARTS->OZONE->ODOR->LEAD->STAR->SEAL->ELITE->LOT->DEAL->NEW, leading to the nonsense string “EPOOLSSELDN,” which formed our contest solution when arranged a bit differently. I double-checked everything and found the intended order. Beginning with 1a (EARS), each grid entry matched the final word in a clue in a different horizontal entry (NEW in this case, clued as “Wet behind the ears”). That formed a chain that LOOPed back to EARS after PARTS: 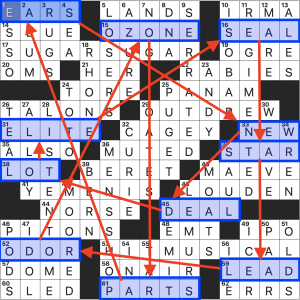 That forms our contest solution ENDLESSLOOP. Great meta! It’s hard to imagine the amount of precision that went into creating this one. I especially liked the ENDLESS nature of the solution that LOOPed back on itself. I try to avoid the obvious when ending with a song, but I can’t think of a better choice than Mike’s (and it’s been running through your mind all weekend anyway), so here it is: