This puzzle is just flat-out wrong about a major scientific theory. Wrong. Wrong. Did I mention wrong? I suppose it might be kinder to say it’s out of date, but that would be incorrect. It’s wrong.

Each theme answer has circled letters that contain the name of a continent. It’s a 16×15.

So far so good. Here’s where it goes wrong. The revealer at 63a is [Land movement spanning millennia…or what each set of circles suggests] and the answer is CONTINENTAL DRIFT. No. No. Continents do not drift. Tectonic plates move because of seafloor spreading. CONTINENTAL DRIFT was the first term used to describe this process and Wegener, who coined the term, thought the continents actually drifted. The correct term is “plate tectonics.” I have been attached to a geologist for 40 years. He’s a structural geologist, which means his specialty is plate tectonics. We used to have a bumper sticker that said REUNITE PANGAEA. I know what I’m talking about. And don’t @me that the term is in common use to describe plate tectonics. It shouldn’t be. I don’t object to having CONTINENTAL DRIFT in the puzzle. It’s in the language. It’s a perfectly fine theme. If the revealer included some signal that term is obsolete, it would have been a good, solid Tuesday theme. Maybe even rock-solid. As it is….it’s wrong.

I was already cranky before I got to the revealer because there is an absolutely egregious and completely avoidable dupe at the top of the puzzle. 5a [Bay of Naples Isle] crosses 9d [Archipelago part]. The answer to 9d is – you guessed it – ISLE. The answer to 5a is CAPRI which could have been clued with reference to women’s clothing or a citrus drink. Or as the home of the Blue Grotto. Or SOMETHING. There was absolutely no reason for this. I know some editors don’t care about dupes but seriously, come on.

What I didn’t know before I did this puzzle: that Jerry Garcia played on “Teach Your Children.” When I went looking for this video, the first hit on Google included that info. 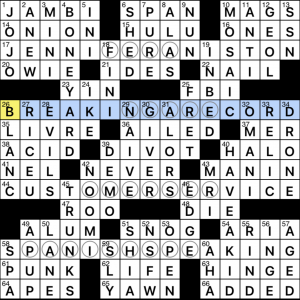 Tricky theme this week: feelings scrambled in the middle of the longest entries.

BREAKING A RECORD also contains RAGE, so thank goodness for the circles to let us know which feeling we’re looking for. HAPPINESS was a pretty impressive find. It’s less evenly divided than the other theme emotions, but it spans nine of the fifteen letters in the entry. Great find!

Theme: OSCAR-winning films “frame” the theme answers as indicated by the circled letters. 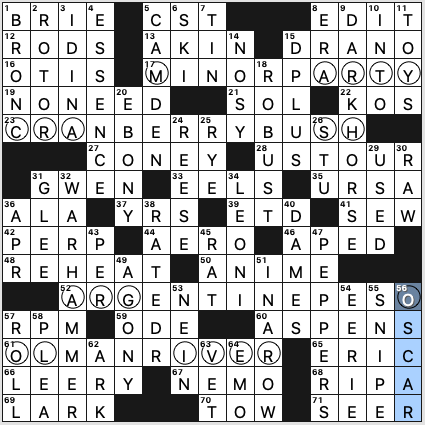 I’m not a huge fan of this type of theme, but as it goes, this one’s pretty nice. The entries are well chosen, the films are consistently Best Picture winners, and the title is apt. Nice.

As usual, Zhouqin PEPPERS the grid with lively entries like DARK HORSE, CAMDEN, “NO NEED,” and WARHAMMER [Medieval fantasy game franchise]. I wanted WARCRAFT for that last one, but it was a letter too short. I’ve certainly heard of WARHAMMER and seen it in stores, but haven’t known anyone personally who plays it. Still, it’s very popular and definitely crossword-worthy.

Hi, folks! My solve was untimed because I’ve interspersed watching the men’s short program figure skating with looking at the puzzle. Zero sense of how easy or hard this puzzle played for a Tuesday.

It’s a great theme, with fruits and units of measure combining naturally: 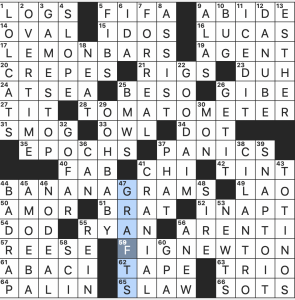 I suspect LAO, [Vientiane local], is new to many Tuesday beginners. Get to know it! You’ll see it at least a few times a year in the NYT puzzle. Vientiane is the capital of Laos. There’s also ABACI, a plural of abacus that I feel isn’t often seen outside of crossword puzzles.

Four stars from me. Enjoy your Tuesday!

Great theme and themers in today’s puzzle, along with fun entries throughout and a few delightful misdirection clues. Also worth mentioning, it was edited by Mollie Cowger and Erik Agard. 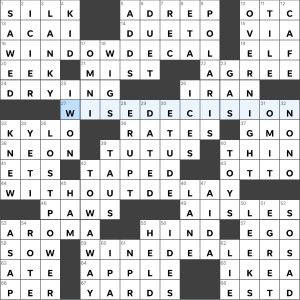 Theme: each themers contains the word WIDE, with WI- separated from -DE at various distances apart, or varying amounts of “open”

Today’s theme was just the right amount of tricky for me. I started looking for something to do with “open” at first but then it became clear that “wide” was the focus. It didn’t jump out to me right away, given that the themers have multiple “e” or “d”s in them to see where the split was but it was nice that all of them began with WI-, suggesting that -DE would be paired together as well which then made them easier to spot. WINDOWDECAL took many crossings, being the first themer which at that point I was thinking about “open” and based on the clue had “sale”, “bogo”, or “deal” under consideration. WISEDECISION and WITHOUTDELAY are my favorite of the themers, given that they feel more familiar to me and thus had cluing that resonated stronger with me and helped fill them in. WINEDEALERS gets me every single time—even typing that phrase out just nowa, my fingers immediately put “-sellers” instead.

Fun puzzle today with many misdirects, which I really enjoy. My favorite is when the clue makes it sound like a specific entry but in fact it’s a general term, such as ADREP and NEON. Another cluing of note for me was [Throws in] which I couldn’t help but autocomplete as “…the towel”, though in this case the entry is ADDS. Excellent job! 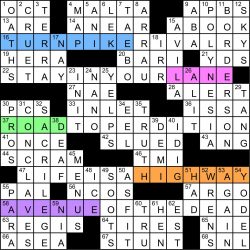 Hello there, everybody! Here is hoping that you are doing well and, for those who competed in Boswords, I hope you had a great time in solving all of the grids by some great constructors, as well as hearing from each of the constructors on the Boswords Twitch stream!

Lots of places on which to travel in today’s grid, as each of the five theme entries are multiple-word entries in which the first or last word is the name of a type of thoroughfare.

Got to appreciate the stacks of nine-letter entries in the corners to go along with the themed entries, with POLYNESIA only coming after I thought to type in MALDIVES after uncovering the “L” first in the entry (10D: [Pacific Island group]). We have more island country love in the grid with MALTA (4A: [Country south of Sicily]). Never knew that a day honoring pumpkin spice officially existed until now, but seeing OCT in the grid reminded me of hanging with a good friend back when the allure of pumpkin spice lattes started to turn into a national obsession about 12 years ago (1D: [“National Pumpkin Spice Day” mo.]). Didn’t have it when when she offered to let me have a sip, and I don’t regret that I’ve still never had a PSL…or anything with pumpkin spice for that matter. When I saw a pumpkin spice variety of my favorite cookie (Keebler fudge-striped cookies), I was done with pumpkin spice for good! 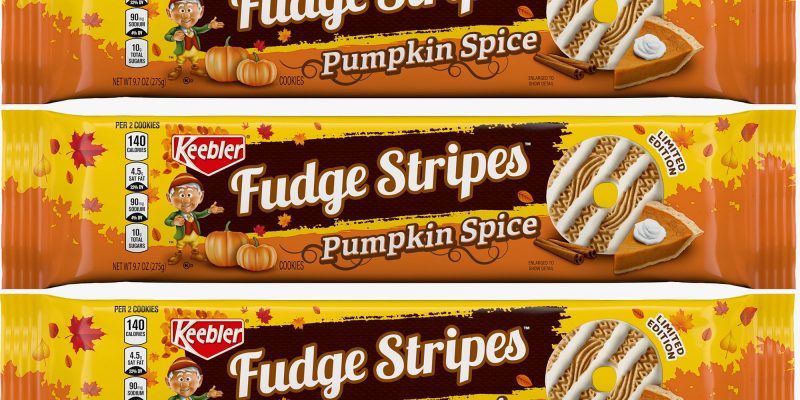 “Sports will make you smarter” moment of the day: ICE (48D: [Cool cubes]) – For the first time in a while, I won’t highlight a person in this section, but rather a principle. There is a chance that, while watching a college or pro basketball game, you may hear that a team, while on defense, is “icing” a ball screen. No, they’re not putting frosting on the ball. “Ice” is a defense employed against a pick-and-roll situation in which the on-ball defender forces the ball-handler to the sideline, restricting his or her access to the middle of the court (where the most space is). In layman’s terms, the person guarding the ball-handler forces that ball-handler to not utilize the screen that is being set for him or her, which then forces the ball-handler to dribble toward the sideline, a less-dangerous scoring area for the offense. (Also, the sideline acts as an extra defender, restricting the space the offense has to come up with an efficient look at the basket.)  Got all that?! Good! ;-) 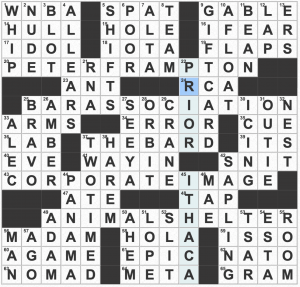 Not sure how to review this. This is one of the worst Universal solve experiences I’ve had. It was solely because I solved it on the webapp and met clues like this:

No. Just no. Why on earth would a publication that has no ability to use circles/shaded squares (this puzzle could benefit from both in this case) run a puzzle like this? Mind boggling.

It’s like someone who is lactose intolerant doing keg stands at a milk bar. I get it. You like milk. But sorry dude, it’s a super bad idea.

This puzzle had a great idea, completely ruined by the presentation.

I didn’t even bother to do the mathematical acrobatics until after it was solved.

Yes, I know, the experienced solvers who are regulars to this site aren’t likely to be overly bothered. But I typically try to look at Universal from the perspective of newer solvers. I solve alongside new solvers frequently. I’ve seen it time and time again: Running themes like this with chaotic cluing does the exact opposite of turning potential-constant-solvers on to crosswords. It’s a complete turn-off.

Great theme, Paul. But it’s being run in the wrong publication. The competition has software that can handle it. Universal is still hanging on to that app that highlights all the entries in one row/column when you click on only one, has laggy loud and dated sound effects, sometimes turns punctuation into ampersands, and can’t handle circles.

I’ve been trying to keep these rants limited, but in this case I believe it’s more fitting than usual. This puzzle was ruined. Shaded squares for the animal and circled squares to the area in which they are kept would’ve made it awesome.

Awesome clue for NEST! [Sticks together?]