Theme: Objects that have become obsolete due to the SMARTPHONE 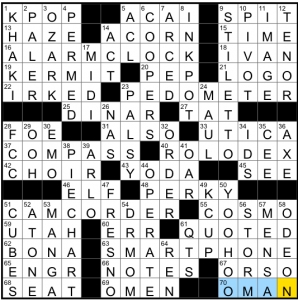 After spending most of the afternoon today watching Super Bowl commercials, today’s crossword reminded me of a classic one for the iPhone – “There’s an app for just about… anything!”. It is kind of wild to think about how many devices are made obsolete by the SMARTPHONE. In fact, that’s my biggest problem with the theme, because there are so many other items that could have been included! Also, some items are much more obviously replaced by a phone while others are still widely used – for instance, I use a physical ALARM CLOCK, but when I saw the word ROLODEX in the puzzle, my first thought was “well, that’s retro”. I do like how much thematic material is in the puzzle, as a high number of answers are needed to drive home the point. But overall I was left thinking “huh, that’s neat I guess” more than “wow, what an exciting puzzle”, which I guess isn’t too surprising when the theme is pretty much a list of household items.

I did like the fill overall in the puzzle! Everything was pretty clean and there was not too much in the way of junky short fill, which allowed me to break my Monday PR. Loved starting the puzzle with KPOP at 1a [Genre for the boy band BTS], and KERMIT the Frog and Lil NAS X references are always welcome. The long downs of STILETTO and PIE CHART are nice too (is the clue [Apt infographic for showing a bakery’s sales] cute or too cutesy? Please discuss). That being said, there was some crosswordese that might be difficult for newer solvers (I see a 5 letter upstate NY city and I immediately drop in UTICA, but it’s taken me years to learn that – ODEON is similar). I’m glad I got to the lovely southwest downs of CUBES, ATONE, and MANGA rather than the acrosses of BONA and ENGR.

Congrats to Alan on his debut, and happy Valentine’s day to all! 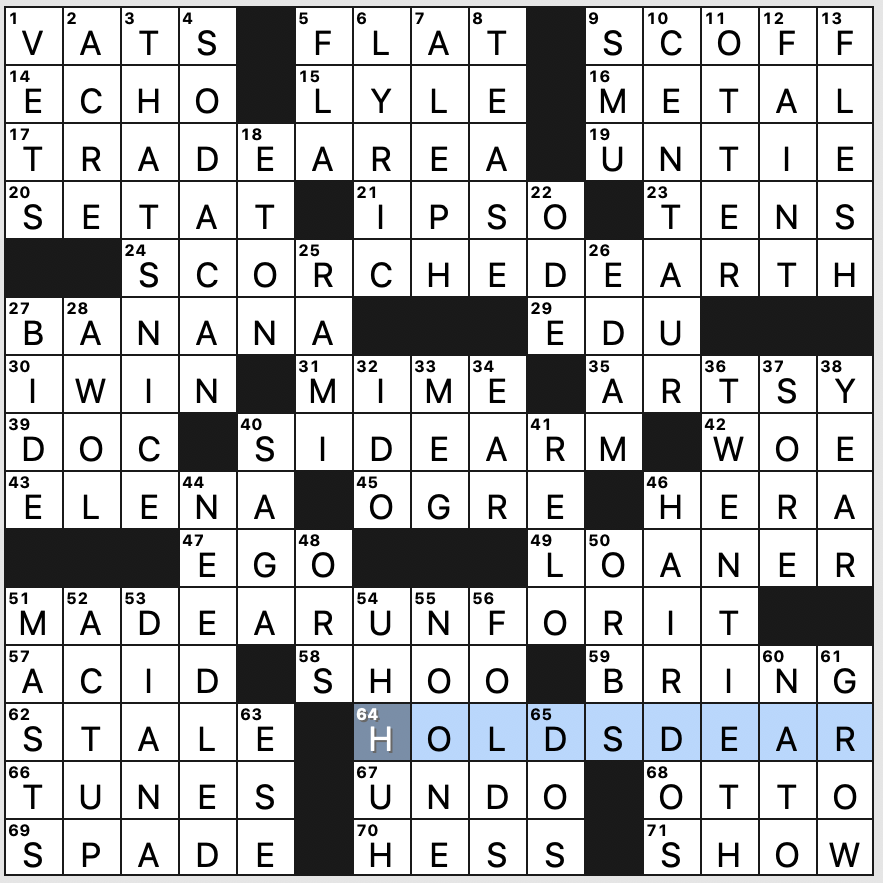 That works. It’s Monday. It’s Valentine’s Day. And I know Mike Shenk likes to run topical themed puzzles around significant days of the calendar. I’ll admit I was hoping there’d be different terms of endearment in each theme answer, just for an added challenge, but the revealer makes that impossible. However, said revealer and the title do provide a solid basis for the theme. 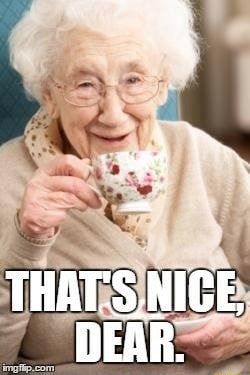 I wanted “THAT’S GOOD” for 3d [“Glad to hear it”], but “THAT’S NICE” goes better with the theme. I also liked CENTAUR, SODA CAN, and HAIRDOS. I’m not sure why, but I was expecting a cardinal number for 36d [Anniversary for which china is the traditional gift], so I kept hesitating on the I in TWENTIETH. Anyone else? 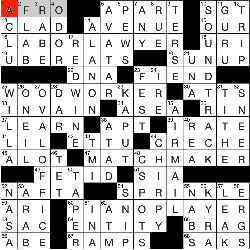 Today’s theme is so straightforward I almost wonder whether I’m missing something. There’s no revealer, but one isn’t really necessary since we’re just dealing with alliterative jobs, with the alliteration stated directly in the clues:

Can’t say that this theme was my favorite. It doesn’t feel quite like wordplay, so as much as I sometimes say I’d rather have another theme entry than a revealer, this puzzle I think could’ve benefited from a clever revealer to produce more of an aha moment at the end.

The fill is overall quite good, with UBER EATS, CHIRPY, SOUNDTRACK, OVAL OFFICE, and KAPUT catching my eye. And WILLA Cather is pretty much baiting me to like the fill, right? 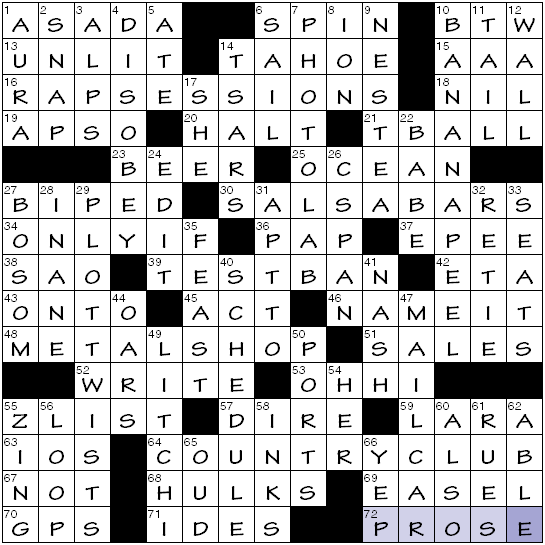 Today we have ostensibly familiar two-word phrases in which the first part also happens to share the name of a music genre. They’re punnily clued in that sense.

Let’s make it a pair; here’s another OUD DUO piece (with additional percussion). 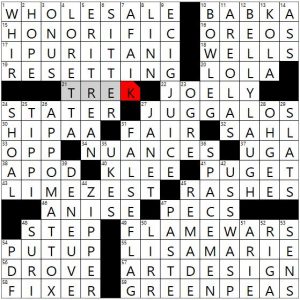 Fun grid with some toughies today from BEQ. Maybe a little more short stuff than we’re used to on a Themeless Monday.

Tough spot: I PURITANI crossing LINN. The former I’m fine to chalk up to my not knowing much opera. The latter I’ve only seen in puzzles, but I think it’s gotten me on the L- before, and it was pretty clear the crossing had to be a consonant.

Stuff I learned: How to spell APPOMATTOX (though we’ll see if I’ve *actually* learned it); actress Catherine DENEUVE (seems like a pretty big miss on my part, not to know her); the relationship between TIPPI Hedren and Dakota Johnson. 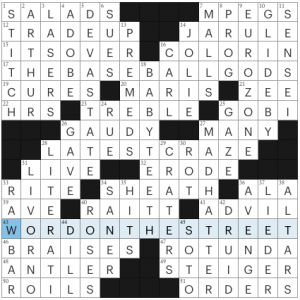 I started out clicking through the Across clues, stumped till the fourth one was something I knew. Thank you, JA RULE feat. Ashanti, for a song I don’t much care for, but it’s WGCI’s favorite older song. I pretty much solved the puzzle clockwise from the JA RULE northeast and eventually back around to 1-Across’s corner. Did not play like a New Yorker Monday, though—felt more like one of their Fridays to me.

4.5 stars from me. Incredibly smooth for a 64-worder! Those four corners are spacious but don’t have any bogus roll-your-own words or phrases or wildly obscure vocab. 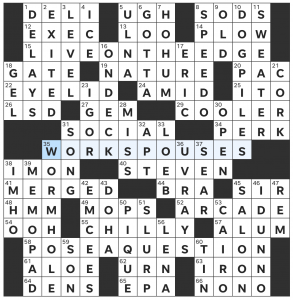 Wanted to shout out DOG PILES and WORMHOLE, but don’t have time for a write-up beyond that unfortunately. Thanks Rebecca, for a fun puzzle!