Today’s “Change of Heart” puzzle has a prompt that hints to a meta answer: “The middle letter of the answer to each starred clue can be replaced by a different letter to form two new words across and down. Read the new letters, in order, for a bonus.” Let’s dig in and see what’s going on! 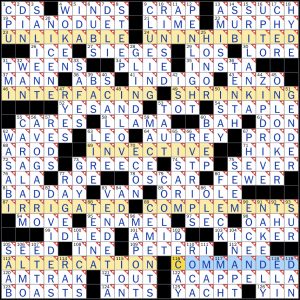 It seems that this puzzle is our secret VALENTINE! <3 Wow! If you’ve ever tried to construct a Sunday-sized puzzle with a solid theme, you know how hard that is without the meta aspect. To have this degree of flexibility in the entries to allow for such a fun twist shows true skill, and the fill / CLUEING are also super clean. Bravo to the constructor! What did you think? Let us know in the comments.

We’re going on on ART-buying spree today. The trigram ART has been added to familiar phrases in each theme entry. 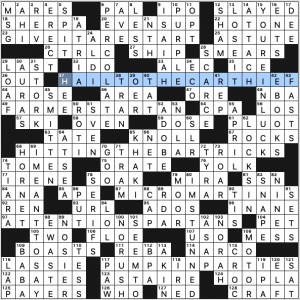 A fun set (mostly) with a few surprising finds. It kept me engaged throughout the solve.

The long fill is very chatty today with “YOU’RE IN LUCK,” “I MEANT TO SAY…,” and “I’M STUNNED.” Other goodies include PERCOLATE, LOCKS IN, and SMITTEN. Nothing overly kludgy either.

A strong puzzle with a solid theme and clean, smooth fill. Four stars.

Theme: Each of the themers include CLAM in reverse order, moving up the Down answers. 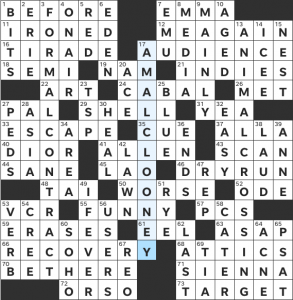 This was a really diverse and great batch of themers. FORMAL CONTRACT and ANIMAL CROSSING fell right into place for me, but I also enjoyed the more political inclusion of AMAL CLOONEY. This answer is one of those great examples in which I was more easily able to fill the other two, making the theme really apparent where I was able to fill in AMAL CLOONEY without too much trouble and leading me to learn more about her work with Nadia Murad.

I loved the peppering of squares in the center of this grid. My pace picked up as I moved through the shorter three-, four- and two six-letter (ESCAPE and DRY RUN) answers. In contrast to these shorter answers, it was nice to see the two 14-letter themers nearly spanning the grid. Plus, it also drew attention to AMAL CLOONEY right down the middle, as if being like “go look this person up if you don’t know.” To make it easy, here’s the basic rundown: Nadia Murad is activist fighting against the genocide of Yazidis in Syria and Iraq by ISIS. She was nominated for the Nobel Peace Prize. Clooney has worked with Murad to hold perpetrators accountable for these crimes.

That’s all from me for today! There were plenty of interesting facts with this puzzle as well, so I definitely recommend taking a deep dive to learn more about folks like 48a [“Hong Kong singer Samuel”] TAI or South Korean rapper RM (aka Kim NAM-joon). Have a great week!

This is a byte sized puzzle :)

THEME: Meta… but surely something to do with binary code! 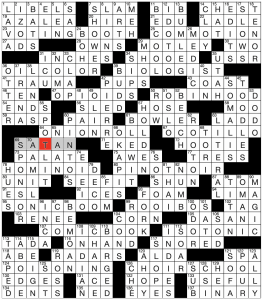 Google around for your favorite binary to text translator (I used this one ) and plug in the numbers for our meta answer: BIT BY BIT.

A fun meta with a wonderfully apt final answer.

The BINARY nudge in the corner would probably make this the equivalent of a week 1 Gaffney, so I hope this was accessible to most solvers, though there may be a bit of confusion as to how to translate the final message. I simply googled “Binary to text” and found a website that worked just fine.

For me, I noticed the abundance of O’s and I’s before I was halfway through the grid. That coupled with the title was enough for me to suspect what was going on. Plugging in the numbers into the translating site made me feel like Ralphie in A Christmas Story, though I was thankful the answer was more interesting than a commercial for Ovaltine.

Translating binary to text is not a random process, though it might look it on the surface. As Evan pointed out to me:

So I used the same rapidtables URL when I was first building it to confirm the letters. But then I (re)learned that you can convert the binary codes to letters without looking anything up, just using simple math. Here’s how:

You have eight-digit codes, each representing a letter. You can disregard the first three digits for each one (010) since that just tells you they’re uppercase letters (lowercase would be 011). The last five digits tell you the letter’s position in the alphabet. Working left to right, you multiply the fourth digit by 16, the fifth digit by 8, the sixth digit by 4, the seventh digit by 2, and the eighth digit by 1, then calculate the sum of the products (normally I’d work right to left so I could multiply up, but I think it’s easier to illustrate this way). For the first code 01000010, toss out the first three digits and you’re left with 00010. Your equation is:

The fill did not feel as smooth as usual for me, which is clearly due to the constraints imposed by all those O’s and I’s. I was lucky enough to know ROOIBOS from the many times I accompanied The 25th Annual Putnam County Spelling Bee but I balked on ISOTONIC, OCOTILLO, and HOMINOID. I’d be lying if I didn’t give serious side-eye to CHOIR SCHOOL. Hehe. Some new names for me tripped me up too (ISAO and NOMO to name two).

That said… seventeen theme answers. That’s nuts. Especially with each answer containing exactly four of the digits for the code. Impressive.

Coincidence of the day for me:  I am currently teaching Man in the Black Suit to my seniors alongside Young Goodman Brown. It’s a great pairing. The title character is referred to as “the devil.” For some reason I have difficulty perfectly equating “the devil” with “Satan” as the latter seems more like a specific figure and the former seems vaguely metaphorical, but I’m pretty sure that’s just me. So it still took me a while to get that entry right.

Thought on this one?