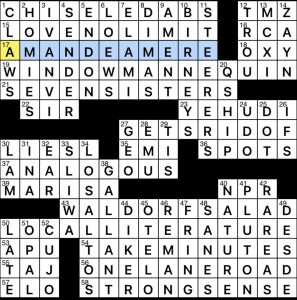 Woo boy this was a tricky themeless. Lots of long fill in the form of a triple stack of 11s, followed by a 15 and a 12. Lots of proper nouns, many that I had never heard of, leading me to consult Google to finish up parts of the NE region *hangs her head in shame*. I’m glad to have learned a lot, but it was frustrating not knowing either of the BIRNEYS, Jeff AMENT, YEHUDI Menuhin, or AMANDE AMÈRE (which brings up thoughts of cyanide). I had A for È until I looked it up, given that the Italian for bitter is “amaro” and the Spanish is “amargo,” but the foreign language knowledge didn’t help me here. Towards the bottom of the grid, OTELO with one L threw me off, Joshua SANES was new to me but gettable through crossings, and PLUTON needed the “god of the underworld” qualifier for me to have any clue. 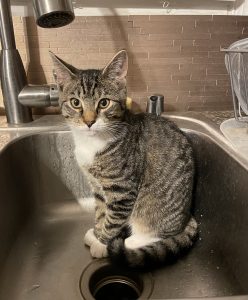 Thwomp, a cat with black stripes on a grey/brown background and a white chest and paws, sitting in a sink.

LOVE NO LIMIT is a great timely addition given Mary J. Blige just played the Super Bowl halftime show. CHISELED ABS and WALDORF SALAD are delightful. LOCAL LITERATURE brings me back to the time where I could safely wander a bookstore, browsing the shelves for something I would have time to sit and read. To END ON a pointy but cuddly note, here’s a photo of the youngest source of CLAWS in the Milburnigan household, our kitten named Thwomp. 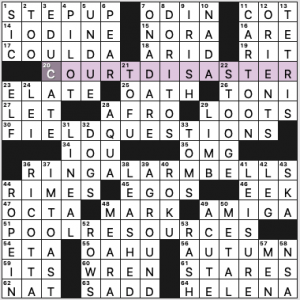 Today’s theme takes familiar phrases that begin with verbs that are also nouns for sports venues, and reclues them as if they pertain to those venues:

The surrounding fill was quite smooth, with prefix OCTA perhaps the only outlier in an otherwise on-target Tuesday grid.

The revealer at 64a, PARTING SHOT [Last word, and a hint to the starred answers], is our clue that the “parting”—or final—word of each theme answer is a type of “shot.” In other words, each theme answer ends in a word that can precede “shot.” 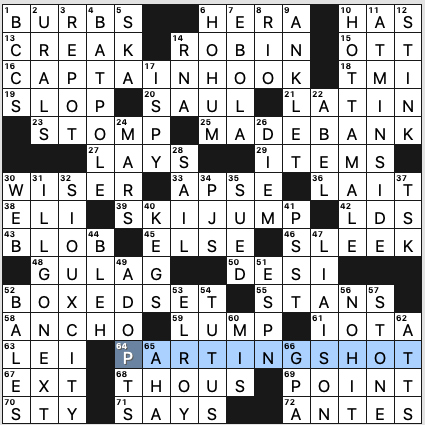 I didn’t notice until now that there’s an added element here, and that’s that each type of shot comes from basketball. That’s an elegant touch and it explains the title. Entries like SHELLEY LONG, COFFEE MUG, or LEMON DROP would be inconsistent with the basketball subtheme.

I’m liking the long stacks in the corners, namely “I’LL GO NEXT,” SIOUX CITY, ATM INSIDE, and HOT TAMALE, though feel free to clue that last one as the candy. The actual clue [Bombshell] feels dated at the least. Also, BATPOLE is a fun entry at 4d.

THEME: Letters are changed from S-O-U-P at the beginning of phrases to N-U-T-S to create wackiness. 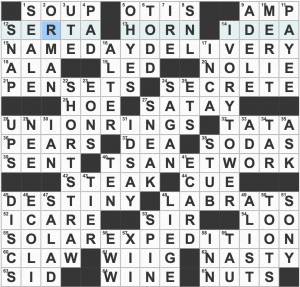 I love this theme! Granted, I didn’t see it until the very end, but I really enjoyed the resulting AHA. That’s not all that common for me to enjoy a theme when I have to figure it out post solve, but in this case it felt super fun and clever.

Favorite of theme entries was UNION RINGS, I think because I particularly like the fact that the clue [Wedding bands?] is already “a thing.” Least favorite was TSA / USA switch. That one felt a tad forced. But, of course, swapping a consonant in for a vowel- especially a U- couldn’t have been all that easy.

Fill is just fine. Liked the clue for XII (12 letters?) and the apt clue for SERTA [Mattress brand that anagrams to “a rest”]

Great puzzle with a fantastic theme and themers, lots of great fill, and a fun grid design. 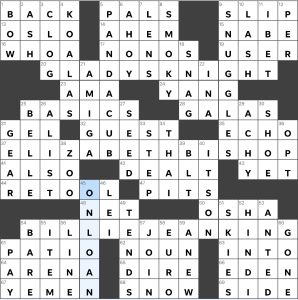 Theme: each themer ends with a type of chess piece

Though the themed clues weren’t for references in my knowledge bank, it only took a few crossings for each before the names in the entries began to appear and they all were familiar to me so at that point I could fill each in. GLADYSKNIGHT can sure belt out a tune and also has her own protector watching her back. ELIZABETHBISHOP wrote incredible poetry about everyday life and death, as if an authoritative air grounded her. BILLIEJEANKING former #1 world female tennis player, she will always be considered one of the greatest tennis stars of all-time. Also, all of the themers are women.

Stumpers: DIRE (only “asap” came to mind), PATIO (“bbq” or “backyard”), and RETOOL (crossed with “ZOO” didn’t help but not sure why, both aren’t obscure but just didn’t get it readily today)

Other than the themers, I started out today at a good pace until the lower half and in particular the last third. With downs, I began to fill in the grid again with a nice flow and finally got some traction in the bottom third, though it took me a few more passes back and forth to complete that section. Many of the clues were misdirections, at least for me, though looking through them completed, they all make perfect sense. Still a very enjoyable puzzle despite being more challenging for me today.

It took me quite a while to figure out the theme to this puzzle. I didn’t need to know it to solve the puzzle, so I’d say this is a Tuesday-level grid with a Thursday-level theme. I liked the theme a lot once I got it. It didn’t help that there’s are two clues referring to the AUDI LOGO and the first themer is about the Olympics, so I was looking for something to do with rings. That was wrong.

Each theme answer has circles. I figured out that we were looking for anagrams. 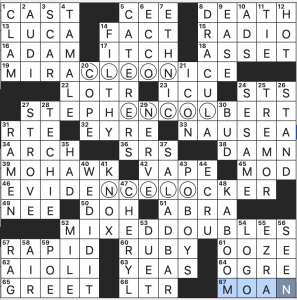 The revealer is 52a [Tennis format with man-and-woman pairs…and a hint to each set of circles] and the answer is MIXED DOUBLES. The anagrams don’t spell DOUBLE. They don’t refer to drinks. I finally realized that it’s CLONE, which is of course a double. A very satisfying “aha!” moment.

What I didn’t know before I solved this puzzle: that CHERYL Miller is in the Women’s Basketball Hall of Fame. 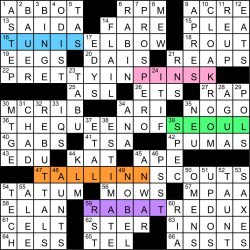 Hello there, everybody! First and foremost, I hope all of you are doing well and staying safe.

Second, my deepest apologies to you for the super-late post. Here is hoping you forgive me for that. I’ll be on time next week, for sure!

In this week’s grid, common phrases are turned into puns as one of the words in replaced by similar-sounding words that happen to also be the names of cities.

Man, it’s a pretty good thing that PROSPERO was a cinch for me, or would “Prosmero” would not have looked out of place, assuming that I didn’t think “Minsk” was an error (7D: [Miranda’s dad in “The Tempest”]). Other than that, a smooth solve, and really liked CLOAK ROOM (10D: [Coat checker’s workstation]). Had initially committed to writing about one NBA player in the next graph right before I saw TATUM and easily could have written about current CELTic (61A: [Ancient Brit]) and NBA All-Star Jayson Tatum or former NFL player and Super Bowl champion Jack Tatum of the Oakland Raiders (54A: [Jazz pianist Art]). I promise to write about you guys the next time I see the surname in a grid!

“Sports will make you smarter” moment of the day: KAT (44A: [“Kitty ___” (song by Beyoncé)]) – KAT is the common nickname of three-time NBA All-Star player Karl-Anthony Towns, who currently plays for the Minnesota Timberwolves. Drafted by Minnesota with the first pick of the 2015 NBA Draft, the 6-foot-11 Towns won the NBA Rookie of the Year in 2015-16, and has proceeded to be named to the All-NBA Third Team in 2018 and, in 2022, named to the NBA All-Star game for the third time. In April 2020, his mom and six of his relatives passed away due to complications of COVID-19, and has been public since the start of the pandemic about the havoc it has caused him and his family.