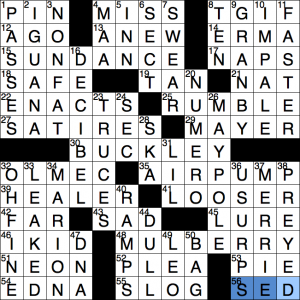 hello and welcome to episode #715 of matt gaffney’s weekly crossword contest, “A City of Puzzles”. i attempted this week 2 puzzle with the instructions but without the hint, and i got nowhere. the instructions were: This week’s contest answer, which is located in one of the eight U.S. states that begins with the letter N, is a city that often appears in crosswords. what are the theme answers? five “cities” (technically three cities and two towns, all quite small, of which i had only ever heard of one) in the u.s.:

first observation: even though these cities are all quite small and none of them are famous, the clues do not mention their states, so probably the states are important. but i don’t know how. i had the thought that perhaps the town name and state name might have a letter in the same place, but that isn’t true (and the lengths don’t match up anyway).

i then thought about counties, and got a little excited when i saw that BUCKLEY is in pierce county and MULBERRY is in polk county. could these all be named for presidents? no, none of the rest of them are.

my next thought was zip codes, perhaps used as indices into the town name. that seems pretty constrained, but given all of the towns in the country to choose from, you could probably find some that work, right? well, this idea died when it turned out GRANBY is big enough for three zip codes—all of which contain zeroes anyway, and zero isn’t great for indexing.

with so little to go on, i eventually threw in the towel and decided to look at the hint, which is an alternate title for the puzzle: “I Suspect Vowel Play”. with the hint in mind, i noticed immediately that the city + state names were all supervocalic (containing each vowel exactly once), and a short time later that they were all in fact euryvocalic (containing Y exactly once, too). in hindsight, perhaps i should have noticed that the original puzzle title was also a euryvocalic, but, well, that’s hindsight for you. maybe three or four years ago i would have been more primed to notice it back when noticing supervocalics was all the rage.

so what’s the meta answer? it’s UTICA, NEW YORK, much more famous than the five theme answers and surely the best-known euryvocalic city in the u.s. that said, it’s certainly not straightforward to just think of euryvocalics, so i can understand the specificity of the instructions. but once you know you’re looking for a euryvocalic, you can rule out north carolina, north dakota, new jersey, new mexico, new hampshire, nebraska, and nevada, all of which contain two or more of the same vowel, so new york is the only state left, and then you’re just looking for a city with A, I, and U. i actually didn’t bother to eliminate those states, though; i just thought of the answer pretty quickly, but only because i was laboring under the (incorrect) impression that the instructions had specified five letters, perhaps because there were five theme answers. (then again, most crosswordese cities are five letters anyway.)

i can’t say this was an especially fun solving experience. i’d probably feel better about it (and about myself) if i’d managed to notice the euryvocalics without the hint, but then again, i’m not sure why this would be something to notice in a week 2 puzzle without the hint. it’s definitely underwhelming that these are all decidedly unfamous cities, though. i guess i was hoping there would be more of a payoff for resorting to such obscure towns.