Theme: Three word phrases where the first letters of each word form a presidential initialism 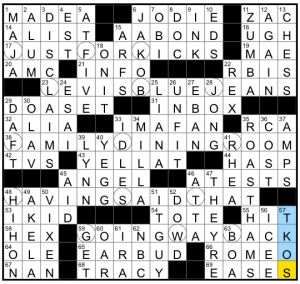 First and foremost, congratulations to Natalie on her NYT debut! When I first saw the numbers in the clues, I thought this was going to be a periodic table puzzle, but no! We see presidential initials in the puzzle all the time as fill, so it was fun to see them expanded out to full phrases. I didn’t realize so many of the presidents we call by initials are from the same era – four of the five mentioned here are between #32 and #36 (and even Eisenhower, who missed out on being in this puzzle, is sometimes called DDE). My two personal favorite answers were JUST FOR KICKS and HAVING SAID THAT. Weirdly, it took me a really long time to see the “blue” in LEVI’S BLUE JEANS.

There were a couple of pieces of fill I really liked in today’s puzzle, namely ZUMBA and ROAST HAMS, and I loved the clue of 36d [Tag line?] for COST. However, there were some pretty rough areas too. The middle section with EBAN/JONG/LIANA/MILLA/YEGG (which I have personally never heard of and was certain was going to be incorrect when I got it from crosses) is full of names or uncommon words, and the southwest corner with AKELA could also be tricky. Having five theme answers is very impressive, but I wonder if the fill could have been improved if there were only four and the grid had fewer constraints. I personally think of JFK, LBJ, FDR, and HST as the big four when it comes to crossword initialisms, so maybe GWB could have been dropped?

Happy President’s Day weekend to everyone in the US! Oh my goodness, I just now understood that this is a timely theme. Another fun layer! 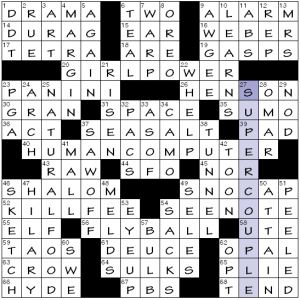 It somehow seems fitting that this crossword should have bilateral symmetry, and that it has two authors. 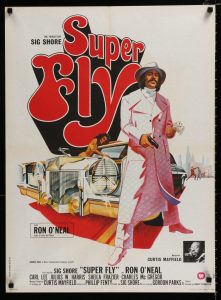 And as a small bonus, there are a pair of centrally-located theme-adjacent entries: 6a [Common number of weeks given for notice] TWO, 61a [6-Across, in cards] DEUCE.

It’s impressive, but super is such a common combining form that it probably wasn’t too difficult to come up with enough workable entries. Heck, in the center we have 31a [“The final frontier”] SPACE, and superspace is a thing in theoretical physics. And 37a [Flavoring from the ocean] SEA SALT? Well, Panthalassa might be considered to be a supersea in some quarters, and super salt seems to be a thing—”‘Super salt’ is a mixture of 9 parts salt, to one part MSG and 0.1 parts disodium inosinate and disodium guanylate.” (Wikipedia, again). These, however, are stretches and in should in no way diminish the theme as it’s been executed.

Haven’t got anything else to comment on. The ballast fill is businesslike and doesn’t lend itself to discussion, at least not by me and not this morning. 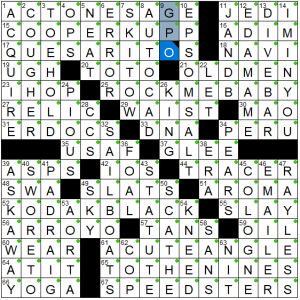 The ten stacks in the NW and SE corners feel vintage BEQ, with something recent (Super Bowl MVP COOPER KUPP), something from pop-culture(ish) with QUESARITO, a telegraphed misdirect for ACUTE ANGLE [61a It’s not obtuse], and a “I suppose it’s a word…” in RAYLESS.

IM INTO YOU, DIVE BAR, and PADRAIG Harrington add to the BEQ-ness. Not a lot else to say in the way of highlights or lowlights, to be honest. Have a restful holiday! 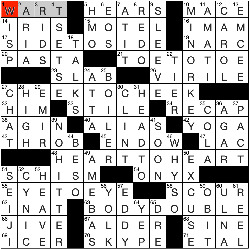 Here’s a theme whose revealer elevates it even though it really isn’t necessary. What do I mean by that? For once, I won’t start with the revealer as we go through:

At this point you shouldn’t need the revealer to see that all the theme entries are of the form [BODY PART] TO [BODY PART], but here it is anyway: [1984 De Palma film, and a hint to five puzzle answers] is BODY DOUBLE, a clever way of referring to the five themers with “doubled” body parts in them. Cute! It’s also a nice touch that the theme clues all begin with “How…”

The fill is mostly fine, although I absolutely could have done without the variant plural AMEBAS on any day of the week, much less Monday. 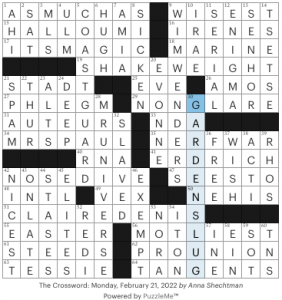 I actually checked to see if the current issue of the New Yorker had a European cinema theme, because this puzzle was jammed with it. I did get WIM WENDERS off the W (though did not know his clued quote, “Before you say ‘cut,” wait five more seconds”). AUTEURS with a French film criticism clue. Contemporary French director CLAIRE DENIS. EVE clued via a Mankiewicz (American!) analogy to Spanish filmmaker Pedro Almodovar. Really, for most solvers, I suspect a single European cinema reference would suffice. Four is just wilding out!

Fave fill: HALLOUMI cheese, which is in my favorite Nando’s order (the clue, [Grilled cheese], is impossible if you don’t know HALLOUMI, and that AMIA crossing, [“The Right to Sex” philosopher Srinavasan], is a tricky one). Also liked “ITS MAGIC,” SHAKE WEIGHT, Louise ERDRICH, COAST GUARD, MR UNIVERSE, and GARDEN SLUG.

Overall, I see 20+ proper nouns (names, places, parts of titles, brand names). That frustrates so many solvers. Something to watch out for when constructing.

Fill and clues I didn’t care for: Plural IRENES. German STADT (“city”) with the German phrase zum Beispiel in it (I sure didn’t remember that from high school German—it’s “for example”) and a cross-reference to ULM. MOTLIEST (WISEST and NICEST joined this in making -EST endings feel overused). Dies IRAE, crosswordese. TSETSE, IN E, terrible abbreviation TNS (really? is this a common abbreviation for tons?).

I do like the grid design. It’s not the prettiest, but it offers good flow and movement throughout the puzzle.

Good morning, everyone! Today’s puzzle confused me for a second because I did not register the title– I thought it was like a “see more” menu or something. But the theme was “. . .” with the three theme answers synonyms for the “.” symbol: 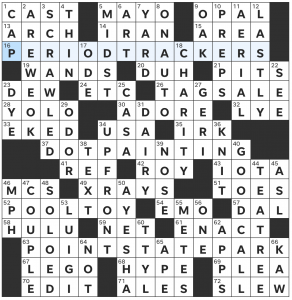