Apologies for the delayed NYT review – some friends were in town from DC and our Binax tests had us in the clear! This week’s Sunday NYT puzzle has some French puns, and I’ll leave it to y’all to tell me if they work / are pronounced properly because I don’t speak much French at all and only recognize some basic French words from crosswords. 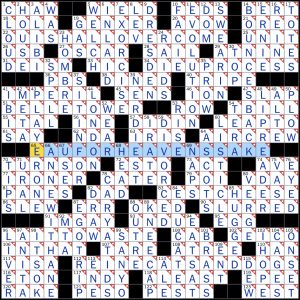 EAU FOR HEAVENS SAKE, CEST CHEESE, and LAIT TO WASTE really cracked me up, especially with how simple their clues could be to get to these 0punchlines. I also appreciated that the French words used were all ones that were easily recognizable from crosswords, making the puzzle feel accessible to the non-Francophones out here.

Other random thoughts:
1A: [Tobacco plug] CHAW – This felt like a strange choice for 1A, which you usually want to be a nice/easy entry to get folks started in the puzzle. We have this more archaic, tobacco-related word instead of CHAP or CHAT, which could have also easily worked here.
14A: [Taller roommate of 15-Down] BERT and 15D: [Shorter roommate of 14-Across] ERNIE – My kingdom for the day when “Sesame Street” lets these kings announce their true relationship. (Also, I wonder if the original clues submitted for this puzzle tied OSCAR at 27A into the “Sesame Street” angle?
91A: [Announcement on National Coming Out Day] IM GAY – You know I had to shout out this entry. I love to see it, especially knowing this entry only first appeared in a NYT puzzle in 2015(!).

What did you think about the puzzle? Qu’as-tu pensé? (Or at least that’s what Google Translate gave me!) Let us know in the comments section below.

THEME: Popular meals clued wackily as if they belong to a celebrity. 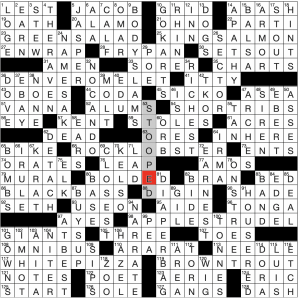 A very over-the-plate (no pun intended) puzzle. One that welcomes solvers at any level into the WaPo building. I was half expecting the first letters of the celebrity names to spell something out in Birnholzian fashion, but it’s rather nice to solve something that doesn’t have (or need) another layer now and again. This one was well-placed in the lineup following a meta from last week.

As far as the themers go, fishy dishes are definitely in abundance! I think I’d take the KING SALMON over the others if I were dining out, but did anyone uncover ROCK LOBSTER and not immediately get an earworm? (my earworm is Peter Griffin’s take on the song. Great. Now it’s back. Arghh!)

Didn’t know Eva GREEN or Foxy BROWN, but those were the only new ones for me.

Some notable clues/answer pairs in this one: 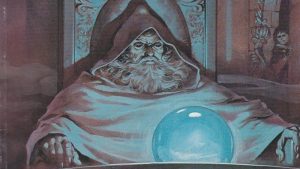 New Names for Me:

And of course, I’m sure all of use smiled at the reference to Betty WHITE PIZZA.

Thanks for this one! Enjoy Sunday.

Theme: Each theme answer includes a part of a chair for you, the solver, to assemble. 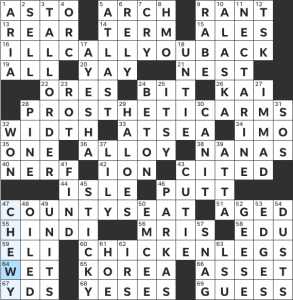 This really fun, creative, and much less harrowing that IKEA directions can sometimes be. I’m always pleased when I get phrases like I’LL CALL YOU BACK on the first go. I also thought that these themers were great in removing each of the chair pieces from that context. I didn’t get the theme until I finished, so it didn’t necessarily help me solve, but I saw the connection right away once I finished.

We’ve got another asymmetric grid here with what felt like a packed grid with 75 answers (if I counted correctly). I appreciated that the asymmetry gave us sets of five in the middle and rightmost sections of the bottom portion of the grid while also maintaining a nice set of fours across the first two rows. The middle fell into place quickly with the quick moves between threes, fours, and fives. I struggled most with the bottom left corner when starting with the Across clues because I was unfamiliar with 55a [“Narenda Kohli’s language”] and 59a [“‘Gossip Girl’ actor Brown”]. However, filling in the Downs quickly brought me to HINDI and ELI.

Three other fun things for today:

Overall, I think that this was the fastest USA Today puzzle I’ve ever done, so I’m feeling pretty pleased with that, and like I said, it was a lot less stressful than building IKEA furniture (though it’s too bad IKEA isn’t mentioned in the puzzle). Have a great week!

Today we have familiar phrases featuring words that are also car models. Their clues are crossword-wacky, of course. 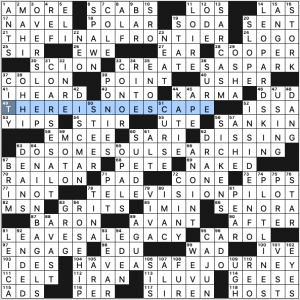 A fun set, yeah? We’ve seen car model-based themes before, but it feels like it’s been a while since I encountered one.

I do have to mention my own car-based puzzle from a few years back. I don’t have that many published grids, so when I spot a theme answer that I used once upon a time, I can’t help but think of that puzzle. Here it is from 2015, back in the earliest days of the WSJ going daily.

LOS and LAS together in the same grid, both meaning “the”, and right next to one another at 11a and 14a? Feels a bit too dupey to me. 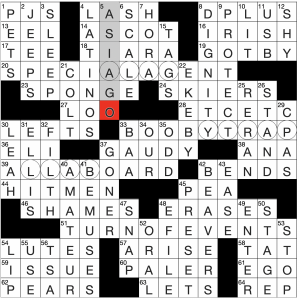 Fine puzzle, featuring my pet peeve of Universal: theme-dependent circled letters. Actually, it’s stronger than a pet peeve. It’s just embarrassing that Universal can’t find a way to publish circles in its puzzles when the theme calls for it. Always takes away from the solve (for this one, I solved in Across Lite, so I got the version that Universal offers that does include circles… the fact that it’s offered in that form is a tacit acknowledgement that the version offered to the masses is subpar)

Love that PARTY can be found in BOOBY TRAP. All themers were solid.

I asked my class of high school freshmen about a week ago if anyone says “LIT” anymore. A unison chorus of “NO” was the response. Maybe it’s time to go back to cluing it flame-style. It’s the equivalent of PHAT from the 90s, and it’s done.

The GOT BY / EKE BY dupe is… well… a dupe. Actually made EKE BY difficult for me to fill in because I thought “No way would a dupe be that blatant.” Calling attention to it by repeating the clue doesn’t help imo.

Anyway, like I said, puzzle was fine. It’s hard for me to get excited with the circled letter themes in Universal, which is no fault of the constructor. I don’t mean to sound as negative as I may be coming across.