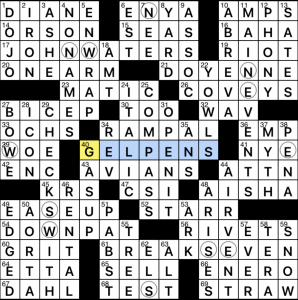 Hi everyone! This week’s Jonesin’ brings us a COMPASS theme as shown in 25d. [What the circled letters represent]. The entries ENYA, PENA, TEST, AND BOWE provide the abbreviations for the cardinal directions north, east, south, and west. The abbreviations for the ordinal directions are found in the longest entries: JOHN WATERS, MAIN EVENTS, BREAKS EVEN, and CHECKS WITH. It’s a simple location theme. Having the ordinal abbreviations span both words of the longer entries is a nice touch.

Lots of fun fill this week. A ONE-ARM push-up does not work your BICEP(s) as much as it does other muscles but it’s still a good workout. I don’t believe I’ve seen DOYENNE in a puzzle before, but I like it! Did anyone else use GEL PENS to make multicolored notes in school? Did you know that ABREVA fights cold sores by inhibiting fusion of the virus envelope with the cell membrane of the skin or mucous membrane cells, so the virus cannot enter the cells? Finally, “Sound of da Police” by KRS-One still slaps almost 30 years later, so consider checking it out. 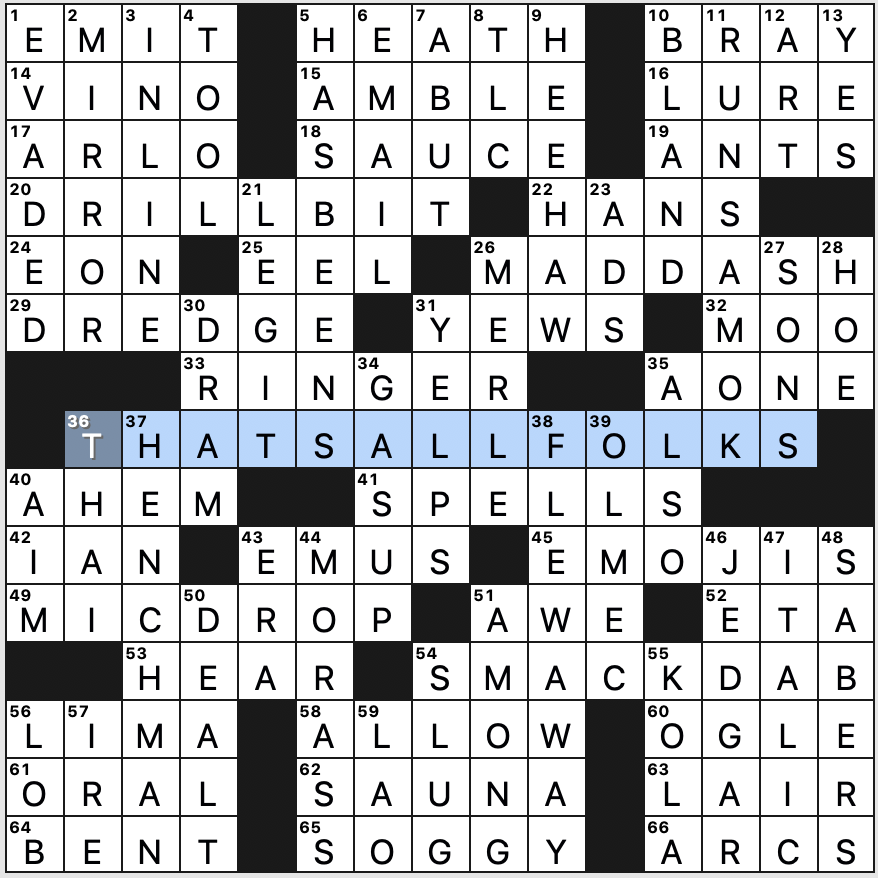 It took a few moments for the penny to drop. I thought the revealer meant we should be looking for words that were synonymous with “all.” But once I caught on, I liked it fine, and I think it makes for a good Monday theme.

It feels a bit light with only 7s and 8s for theme answers, but it somehow makes sense with the theme. You want more theme? Well, that’s all you get, folks. I did enjoy those theme entries and the consistency with which each keyword changes meaning. 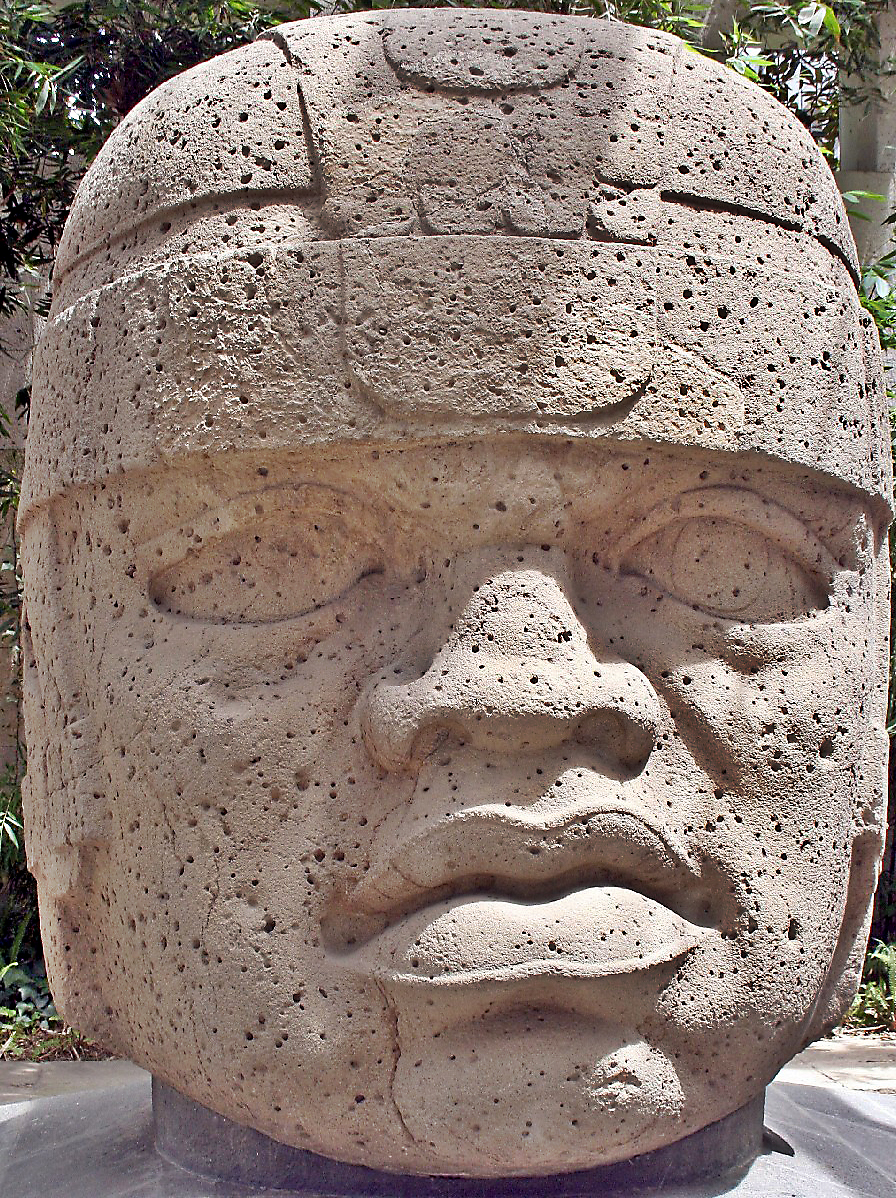 Lynn has been making puzzles for our amusement for a long time, so she’s a pro at filling a grid with fun entries like HAS-BEENS, HENCHMAN, RUNS AMOK, and FLEW AWAY. I also liked HEE HAW and MORASS. On the tougher side, OLMEC [Mexican culture that left behind huge stone heads] might be a challenge for a (except that it’s Tuesday). 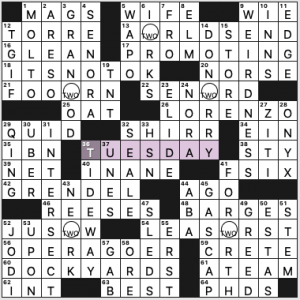 Sure, we don’t expect to find a rebus theme lurking in the Tuesday puzzle, but when the day is the revealer and the rebus squares are all the same (not to mention being circled so solvers can find them easily), I{T WO}RKS.

Fave fill: GRENDEL! How did this never catch on as a baby name? Also partial to WAPO and Bobby SEALE.

The rebus might throw newbies for a loop, and they might also be troubled by F-SIX with a spelled-out numeral, the less common SHIRR, old prefix ERST, and all the foreign-ish entries: EIN, IBN, QING, MOLTO, SENORA, UNES, and ESTAS.

Did not know: 36d. [Water channel that rises and falls], TIDEWAY. We Midwesterners are less attuned to all things tidal. Googling showed me that London’s got a grand public works project going on now, the Tideway Super Sewer, aimed at diverting raw sewage so it doesn’t end up flowing down the Thames and into the estuary. Merriam-Webster tells me a TIDEWAY is simply a channel in which the tide runs. Okay, then. 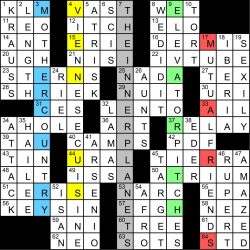 Hello there, everyone! At this time next week, it will be March! Sheesh! Hope you’re doing well as the time continues to fly by on this planet, as well as staying warm with this latest cold snap that will grip a large part of the country real soon.

Speaking of planets, there are a few planets to choose from in this grid, as four long down answers feature circles spread apart that, when combined, form the name of a planet. The long down entry right down the middle of the grid, THE INNER PLANETS, acts as the reveal (7D: [Orbiters (revealed in this puzzle’s circles) that are closest to the sun]).

The grid shape was such that there were no entries longer than seven letters (just two of those) outside of the themes, which is more than fine because of the chinky theme. Liked the not-so-subtle nod to the Olympic Games that just passed, with the cluing to WE DID IT (8D: [“Our team won the gold!”]) and RELAY, even though the latter would be seen during the summer version (37A: [Pass-the-baton race]). Trying to figure out RIEL (24D: [Cambodian currency]) or “rial” might not have been done any favors with the CES crossing and having to put some foreign language skills into use also (31A: [These, to Thierry]). Anyone else thought to themselves how many times they might have seen A HOLE clued in the not-so-innocent, “someone is a jerk” way (34A: [Burn ___ in one’s pocket])? Anytime I see ARSENIO, I totally remember the number of times I tried to keep up with the emcee when he held the final syllable to his first name for about 10-15 seconds when introducing him to the audience (41D: [Late-night talk show veteran and comedian Hall]). Also, a black late-night talk show host, in the 1980s/1990s, was mind-blowing and an inspiration to many who did not see black people in that capacity, so Arsenio Hall, who had many memorable interviews (think Bill Clinton playing the saxophone on his show during Clinton’s campaign to become president), is one of the underrated revolutionary figures in Hollywood and black culture. Say it with me now: “It’s Arseniooooooooooo….”

“Sports will make you smarter” moment of the day: TEX (27A: [Cowhand’s nickname]) – When John Madden passed away last December, many regarded him as the person who helped to popularize football more than any person who ever lived, something I truly believe as well. You now need to know the person who helped shape the way the game of football looks more than anyone, Tex Schramm, the first president and general manager of the Dallas Cowboys. (His given first name was Texas.) Among the innovations that he helped to usher in to the game include the following: instant replay, the use of computers for scouting, multi-colored striping of the 20- and 50-yard lines, a 30-second play clock in between plays to keep the game moving faster, a microphone on referees, extra-wide sideline borders, and wind flags on the goal posts. Any time you watch the game of football, no matter the level, Tex Schramm’s fingerprints are all over it.

I think this was a worthy Tuesday puzzle with a solid theme, early-week cluing and not too much dreck in the fill.

We have three theme answers and a revealer. 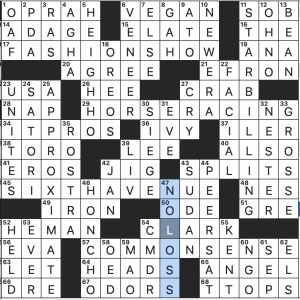 And the revealer: 57a [Practical judgment…and a hint to the starts of the starred clues] is COMMON SENSE. FASHION SENSE, HORSE SENSE, SIXTH SENSE – they all have that in COMMON. I didn’t figure it out until I got to the revealer but then I didn’t really stop to think about it.

What I didn’t know before I did this puzzle: that the first OREO was sold on March 6, 1912.

THEME: Phrases that end in a synonym for “funny” 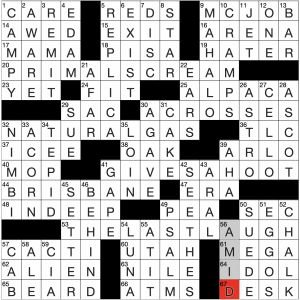 Standard Universal fare today. Solid theme, consistent, and perfectly fitting revealer. Sometimes a revealer can be overkill in titled puzzles, and this one sort of felt like that. After I uncovered PRIMAL SCREAM I peeped the title and knew exactly what was going on, so the revealer didn’t feel necessary for me. Just as often, I forget to read the title at all. So there’s that.

I don’t know why MCJOB took me so long to see. It’s a great entry, but I needed every cross!

Nothin’ else to report on here :) 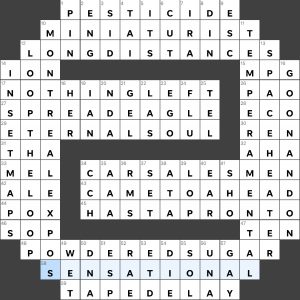 Theme: grid design is the number 2

When I first saw this puzzle, I was in awe then immediately curious just how it would play out, giving the overabundance of three-letter entries. Overall, though it took me longer than usual to solve, the threes were smooth fill with very few crosswordese or otherwise unfamiliar to me. Certainly a SENSATIONAL puzzle with the multiple long entries connected by the threes. A couple of the long entries were tricky but everything was fairly crossed, except for the stumpers for me in the lower west-southwest section. For me, I found this to be an incredible feat indeed!

Stumpers: CCH (recognise the actor but not her name—now I do!), INSETMAPS (had me thinking about the gridding and indexing to find something as well as trying “insert” so needed crossings for this one), and NOTHINGLEFT (love this clue but misread it as where it was and wanted to put “bottom of lunchbox” or something similar)

Though tempted to honor this date and “theme” with a 2.2 rating, I enjoyed this puzzle much more than that! What did you all think? Also, anything fun you’re doing to celebrate or play on today’s date?