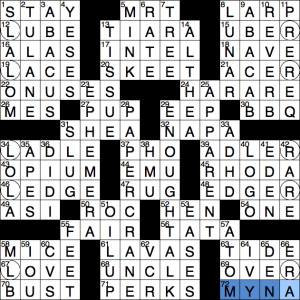 hello and welcome to episode #716 of matt gaffney’s weekly crossword contest, “Taking Sides”. this week, we have a guest puzzle from Matthew Stock, with the instructions telling us that we are looking for an animal. what are the theme answers?

okay, so, that’s a difficult question to answer at first. the most immediately noticeable feature of the puzzle is that a huge number of the clues and answers refer to animals. but there are so many that it doesn’t really help.

the second and third things i noticed were that the grid has mirror symmetry and a pretty high word count (81) for a 15×15 puzzle. actually those were the third and second things, respectively; i noticed the word count was pretty high, and only when i actually counted the words and found 81 did i realize that it was mirror-symmetric, as standard crossword symmetry on a 15×15 grid would require an even word count. but there are a lot of short words and very few long answers; two 10s and two 8s and then everything else is 6 or under.

eventually i had the key realization, which came after another period of staring at the completed grid: there are pairs of answers on the left and right sides of the grid that are identical except for an L on the left edge of the grid being replaced with an R on the right:

this is definitely the theme of the puzzle; each of these pairs is contained within a single row of the grid and it fits with the puzzle title. but what is the answer? that’s definitely harder. the leftover letters after removing the L/R are UBE, ACE, ADLE, EDGE, and OVE, and those don’t spell anything, nor do they form all or part of other grid entries. i thought perhaps the entry in the middle of each of these pairs might tell us something, but those entries (TIARA, SKEET, PHO, RUG, UNCLE) don’t spell anything with either their first or their middle letters.

the other thing is that ten theme answers is actually already kind of a lot; it’s not impossible that that’s all there is in the grid for theme material. this seems especially likely since the two long answers are tucked into the central section away from the pairs of theme answers on the wings. so it might be that we just need to think about what we’ve already found in a different way.

i’ve settled on LOBSTER as the answer i’m submitting, for three reasons:

so i think LOBSTER has a lot going for it, and it’s probably the right answer, but i have to say there’s a little bit less of a click than i usually get, so i’m definitely well aware that i could be missing some more explicit confirmation step—like maybe i was supposed to extract OBSTE somewhere and realize that pointed to (L)OBSTE(R). of course, it’s also possible that it’s just flat-out wrong, but i’m going with it, so … fingers crossed?

i never know how much i am supposed to say about the fill in a puzzle where it feels like i may well be missing something, and maybe everything is more constrained than it looks. but i’ll say that i did not like {Volcanic flow components} LAVAS in the plural but i really, really liked {“Let’s just get on with it”} ENOUGH TALK. that’s a magnificent answer, and also a fitting way for me to bring this blog post to an end. let me know in the comments if i was indeed missing something!

This entry was posted in Contests and tagged Matthew Stock. Bookmark the permalink.