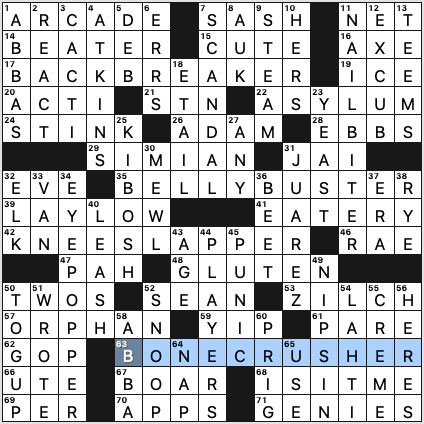 I have a whole list of these, because once upon a time I was going to make a puzzle entitled “Torture Chamber.” Other potential entries include: Chest pounder, spine tingler, head scratcher, tongue twister, ankle biter, brow beater, side splitter, etc., etc.

What’s impressive here is that our constructor got six of these into one daily-sized grid, including two pairs that cross.

Of course, that means there’s little to no room for long fill, but there are a few things to like: KIBOSH, GLUTEN, “IS IT ME?,” and JUAREZ crossing ZILCH.

I have to object to NIPS IN [Visits briefly]. I’ve heard of “nip in the air” and “nip in the bud” but have never heard “nip in” by itself. In my experience, one “pops in” for a brief visit. Elsewhere, EX-CUB is disappointingly un-fun fill. Constructors, if you don’t have EX-GIANT, EX-ORIOLE, or EX-DIAMONDBACK in your word list, then you shouldn’t have EX-CUB. Same goes for EX-MET which I’ve seen before. 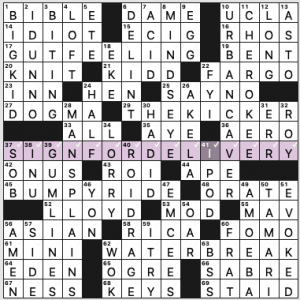 You know how it is when you get a new keyboard and the arrow keys are in a different spot? It slows you down in navigating a crossword grid, and it distracts you. I realize now that I have no idea what the theme even was, so let me see what’s what. OK, the central answer is a revealer clue: 37a. [Accept a package formally … or a hint to 17-, 29-, 45- and 62-Across?], SIGN FOR DELIVERY. Those four things are:

It’s subtle verging on oblique, but I think it’s about pregnancy. Not sure exactly how GUT FEELING applies. THE KICKER is the fetus within, kicking. BUMPY RIDE is … the belly bump? And when one’s WATER BREAKs, the amniotic sac ruptures.

Is that the theme? If you think I’ve missed the boat entirely, please tell me what you think’s going on here!

Moving along to the rest of the puzzle, we’ve got some fave fill: BIG KID, MANSPLAINS, MIND’S EYE, URBAN CAVER. Till I located the revealer, I wasn’t sure that the 10s weren’t part of the theme.

3.25 stars from me. I’d have liked a clearer revealer clue in the mix, because nothing about SIGN FOR DELIVERY screams childbirth. GUT FEELING was weird, and the RIDE in BUMPY RIDE feels off, and then the full phrase WATER BREAK (not as clued) relates directly to childbirth, rather than only part of a themer relating to it.

Editor: Erik Agard
Theme: The theme answers each start with “lo” and end with “ose”, literally cutting the word LOOSE. 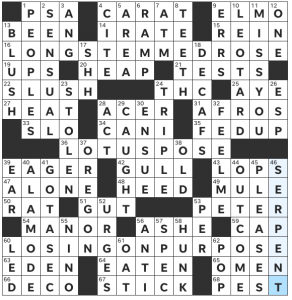 Did anyone else have the song “Footloose” going through their head the whole time they solved this puzzle?? The title works perfectly with the central theme concept, which is always satisfying in a USA Today puzzle. LOTUS POSE is my favorite theme answer – we often see “asana” in crossword grids, but rarely in the clues! Hopefully this will help newer solvers learn the word in context.

This puzzle was a lot more symmetric than CC’s often are, although there are a few black squares that appear in the top left corner of the puzzle that aren’t in the bottom right. In general I really liked today’s grid layout as it allowed for longer answers in each of the corners. The top half in particular is full of standouts – LEOTARD, MISS YOU, Indigenous PEOPLE’S Day, and SENSUAL massages. 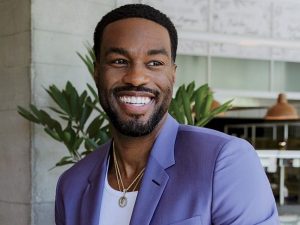 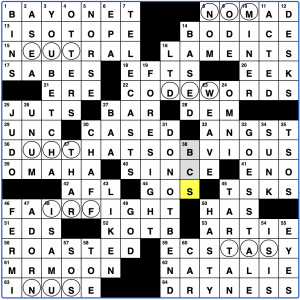 It’s an AVCX debut from Kate Chin Park today, and a lovely theme-dense debut at that.  “Opposite Day” gives a great nudge as to what’s going on with the seven entries in the grid whose clues don’t quite line up with their final content:

Each of these answers is the opposite of what’s been clued, and also features the abbreviation for a day of the week running backwards through the circled squares of the grid. 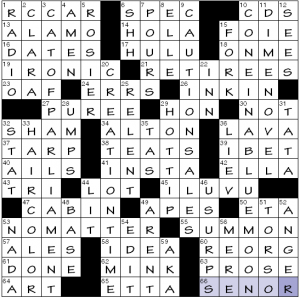 The long theme entries are vertical, which is essential to the gimmick. It’s two-word phrases in which the first word contains the letter C, which is ‘elevated’ to the top spot, generating a new word and a wacky phrase. 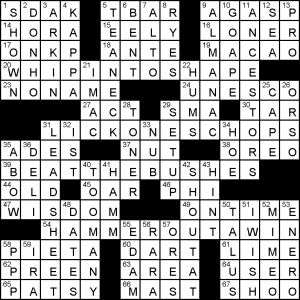 Today’s puzzle by Judy Hughes features a collection of four idioms that start with a word meaning “defeat”. The final one, HAMMEROUTAWIN, does double duty as a somewhat tenuous revealer. The distance between the words’ uses in the idiom and in the “to defeat” sense are often fairly similar, but idiomatic themes are always fun. The others in the set are WHIPINTOSHAPE, LICKONESCHOPS (would’ve sounded better as “YOUR”), and BEATTHEBUSHES. I hadn’t heard of the last one, but it’s in dictionaries as “North American”.

I don’t know if it was the all-horizontal 13/12/12/13 arrangement, which pushes the theme answers against each other, but there was a lot of ugly short stuff. It started with a top row of SDAK/TBAR/AGASP, continued with EELY, ONKP. SMA, ADES etc. 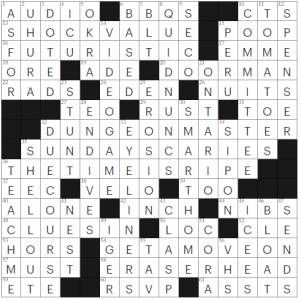