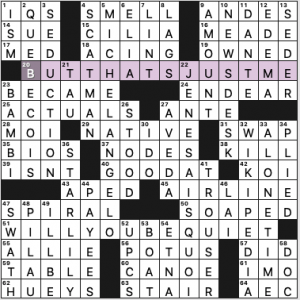 Fun puzzle with a quirky grid that accommodates 14s, 12s, 9s, 8s, and 7s that are interesting, and somewhat chatty. Fave fill: “BUT THAT’S JUST ME,” “WILL YOU BE QUIET?,” that certain JE NE SAIS QUOI, MICHELANGELO, QUEBECOIS, new-to-me STAR LILY, WIKIPEDIA, and SCATMAN Crothers (he entertained me when I was a 1970s kid watching Chico and the Man). Also appreciated AVEDA, POTUS in the shorter range.

There were a few crusty sorts of entries in the midst: MEADE, the long-defunct AEC, and wow-I-haven’t-seen-this-one-in-ages Francis LAI. Might have preferred DIN IMO AER crossing NOR, and possibly French LUI crossing SOUPED for LAI, though there’s already a 12-letter French phrase nearby and a 9 across the way that may account for LAI being chosen here.

I give this one four stars, BUT THAT’S JUST ME. 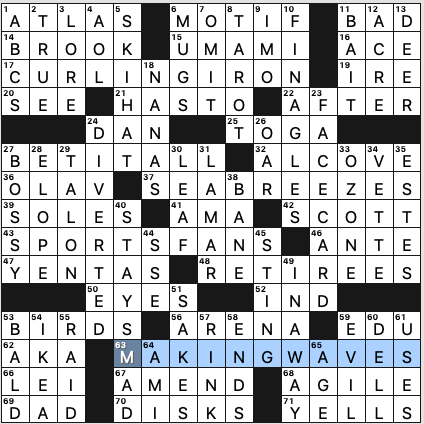 A tidy little theme, yeah? I couldn’t see where it was going, and then the revealer provided a satisfying aha moment. The only little nit is that I wasn’t sure the two 8-letter entries in the fill (BET IT ALL and RETIREES) weren’t part of the theme. Of course, the revealer clue answers that question.

Speaking of fill, it felt pleasantly clean throughout with highlights FINAGLES, FACE CARD, ALCOVE, and the aforementioned BET IT ALL and RETIREES.

FNISS trash can from IKEA 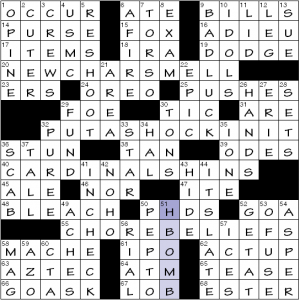 This is what’s known as unfortunate timing.

Apologies that I’m not too keen on this one today.

Theme: Each theme answer is two words, with the first beginning with a W and the second an E, making it so that “WE started” each one. 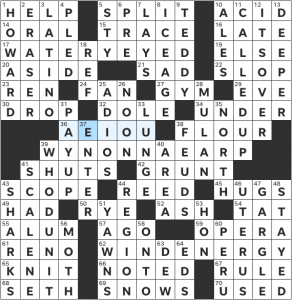 An 11- and two 10-lettered words make up the theme answers today. They move nicely through the grid. WYNONNA EARP was the first one I had filled in its entirety, mostly because EARP is pretty hard to miss, even though I don’t watch the show. When I started WIND ENERGY (and before I got the theme), I started typing with ELECTRIC, but that quickly changed. WATERY came last, especially once I filled EYED.

Most of my fill came on the Down answers, honestly, and I almost wish I’d just started there rather than skimming through the Acrosses first. When I switched to Down, I cruised through. I loved that all four corners had some nice sixes, sevens, and even eights for us! WHODUNNIT crossing WYNONNA EARP was such a treat, and I loved that HOWARD got the highlight in 1d [“University in D.C.”]. I also felt that these longer answers were nicely balanced by a few threes muttered throughout the puzzle. Plus, the middle section surrounding WYNONNA EARP with AEIOU, FLOUR, SHUTS, and GRUNT definitely like I was moving from one section to the other, even though I think that the corners still had plenty of openness for flow.

Overall, I wish I had a video of the construction process on this one with that power mix of longer answers that felt really fun and fresh. It’s a solid and satisfying Friday puzzle.

Good morning, everyone, and happy Friday! I hope you are all consuming an amount of news that does not make you sick to your stomach but does keep you informed on the general state of *waves hand* all of this. Onwards! 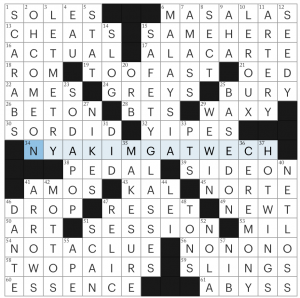 Thanks, Erik for the puzzle! It was a little stickier than my usual Friday time, but I wouldn’t call it hard.