Another charity crossword pack is due out on March 1! Rachel Fabi spearheaded the “These Puzzles Fund Abortion” project, and the donations will be divided among seven organizations from New York to Tampa to the Midwest. Here’s the donation page—With a minimum donation of $15, donors will get 16 puzzles in the TPFA2 puzzle pack (that’s less than $1/puzzle!). Donors who give $25+ will also get a copy of the original 2021 “These Puzzles Fund Abortion” pack with 14 original puzzles (I helped edit the 2021 TPFA).—Amy 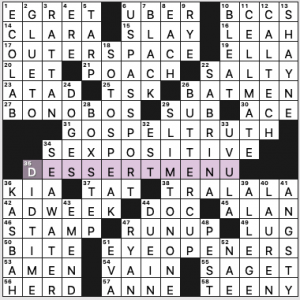 Quick recap, since I procrastinated on writing (I can’t help it if it’s fascinating to watch Korean street food being made on YouTube). Fave fill: OUTER SPACE, the non-canonical (I think) plural BATMEN, SEX-POSITIVE BONOBOS (seriously—those primates are sexing it up plenty), the GOSPEL TRUTH (which … actually is not irrefutable at all, if you aren’t a devout Christian), DESSERT MENU, DID TIME, BOX STEP, U.S. PASSPORT, SLIM TO NONE, BUTTERCUP, CALTECH, and SABRINA the Teenage Witch.

Question: Why choose the less familiar KASBAH spelling (36d. [Moroccan quarter]) crossing KIA when CASBAH and the CIA were right there? Perhaps our constructor has visited Marrakesh.

Four stars from me. TGIF! 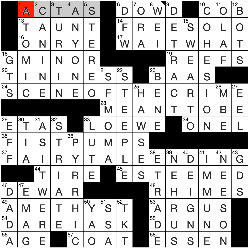 Here’s a grid design you don’t see every day: it almost looks like faucets extending toward the center of the grid from each side, and with black squares coming down the first column and up the last column.

I’m sorry to say the fill overall had more misses than hits for me. Although I love classical music, I’d almost always rather not have the name of a key in a puzzle, as with G MINOR; that’s both because it’s hard to remember what key a piece is in even if you’ve heard the piece before, and also because you can fill in the M, the O, and the R without knowing. Shonda RHIMES notwithstanding, the lower right has an awful lot of proper names to know, plus the plural NEHRUS. (NEHRU JACKETS, sure. Not sure I buy NEHRUS.) TININESS, HAWSES, STRIATE, EMAG, TKT, GDS, ON RYE. I also really wish the 6A/8D crossing had been changed from DOWD/WEI to DODD/DEI, simply because the latter can be clued with reference to Latin for “god” rather than having to cross two proper names. (Guess where I had a mistake in my grid?) 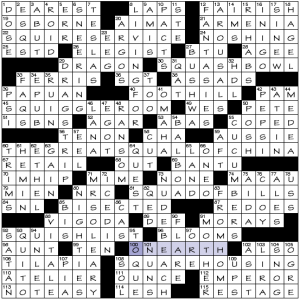 The idea here is that phrases featuring a word beginning with ‘w’ replace it with ‘squ’. All of the theme entries work for me phonetically but the title does not, as I usually pronounce ‘what’ with a schwa sound.

Thinking that Mr Magoo is a SQUINTER OF MISCONTENT.

Anyway, let’s see what else the grid has to offer, but cursorily. 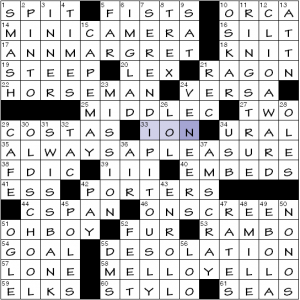 This one definitely lived up to its “Les Rough” promise. My recorded time is of a leisurely solve!

The dynamics were straightforward. A couple of immediate toeholds in the upper left—1a [Roast holder, perhaps] SPIT, 2d [Something spotted on a ranch] PINTO, and then I was off to the races. Wasn’t long before I’d gotten a tendril into the rest of the grid with 22a [Revelation rider] HORSEMAN and then a spy’s MINI CAMERA (14a) and bang! the grid-spanning 7d [As luck would have it] SERENDIPITIOUSLY was practically a gimme. I continued apace. 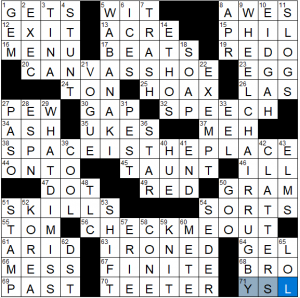 It took me some time to see the theme here, but each themer starts with a word that can follow “blank”:

Oh, hey this is asymmetrical. I only noticed just now as I looked for the partner 15 to WHEELCHAIR RUGBY. Other highlights for me are WHATD I MISS and PAST clued to [“American Sonnets for My ____ and Future Assassin” (Terrance Hayes collection”], which is a lovely, lovely book. EIDGAH is new to me, but I’m only seeing the entry now, as I got it all off crossings.