Theme: The first three letters of each theme answer are repeated later in the word 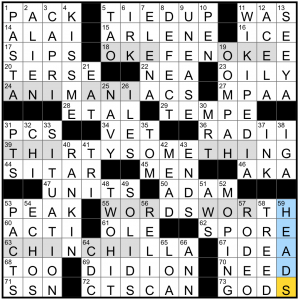 First and foremost, congratulations to Zach on his New York Times debut! I’ve been a fan of his ever since I learned he co-wrote a few songs for Crazy Ex-Girlfriend, so I was hyped to see his work today, especially paired with the incomparable Andrea Carla Michaels.

The theme isn’t too groundbreaking, but I enjoyed that the first trigrams were constrained to the beginning of the words (the HEADS, if you will). The repeated trigram will also help new solvers get extra letters in each theme answer, which makes it a perfect fit for a Monday theme. The theme answers are uniformally excellent. I really liked how varied the pop culture references are in this puzzle; there’s a little something for everyone. (Not sure that we needed the level of specificity in “baby boomer” or “1990’s” in the clue though). CHINCHILLA is a fun word, but I took a while to think of it since I forgot that chinchillas are from South America – I guess I just think of them as pets?? I also had no idea how the middle of OKEFENOKEE was spelled and had to get it from crosses. Outside of the theme answers, I thought that the two long downs were great – WIKIPEDIA is an interesting entry, and SITUATION, while an average word, had a great clue in [Word before room or comedy].

Theme: CAUGHT A BUG (63a, [Came down with something, and what each theme answer has done]). Now that we are maybe, possibly, hopefully starting to see the light at the end of this tunnel, it’s okay to have a crossword theme about “coming down with something.” (But we’re not out of the woods yet, and don’t forget there are still many people in at-risk categories who need us all to stay vigilant.)

The theme answers are all familiar phrases with an insect (or an arachnid in one case) hidden within. I’m interpreting the revealer to mean that by circling the buggy letters, we’ve “caught” them. 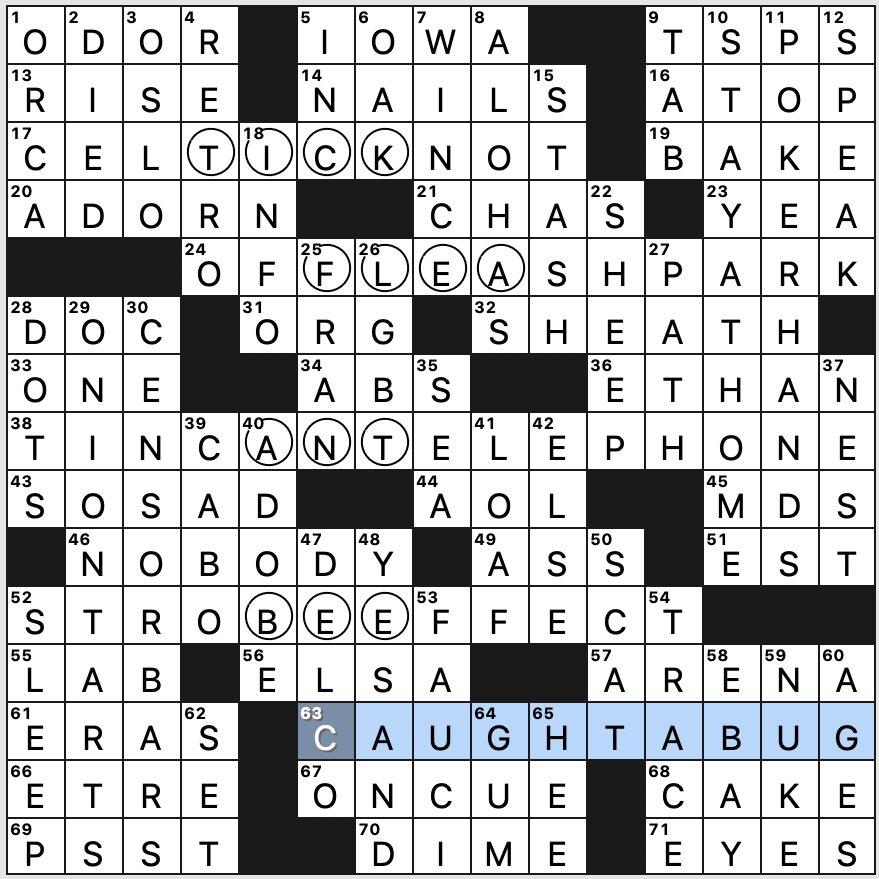 Works for me. I like the slight twist on this standard theme whereby we’ve captured the bugs by enclosing them with circles.

Check out those two stacks of 10s in the corners: STAY AT HOME and POKER HANDS in the NE and ONION TARTS and CENSOR BARS in the SW. I don’t think I’ve ever heard that last phrase, but it was inferable. However, it sounds like it should be clued [Hangouts for FCC employees?].

A fine puzzle and a good start to the week. 3.5 stars. 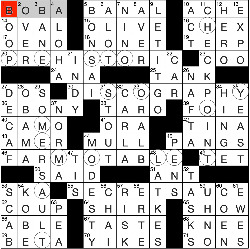 Wonder whether this constructor came up with the theme because his last name is a homophone for a word that could have been a component of this theme.

Lots of circled squares here, and the revealer at 55A [Subtle element in a success story … and what’s revealed by each set of circles] is a SECRET SAUCE. Meaning: the circled letters in each theme entry spell out a type of sauce.

I do have a couple of quibbles with thematic execution here: first, that I think this kind of circled-letter theme works a lot better with Across entries than Down ones, or at least that mixing both could be confusing to Monday solvers. Second, three of the theme words are sauce descriptors, not the sauces themselves: When you say MOLE or PESTO, that means a sauce. But you have to say SOY SAUCE, MEAT SAUCE, or HOT SAUCE if you mean the sauce, not SOY or MEAT or HOT. I guess because there’s more than one example of each it’s not taboo, but I think fewer theme entries that are all sauces and not descriptors for the word SAUCE would have been a better execution.

That being said, the sauces themselves are fun and evocative, and there’s plenty of other yummy food words in the grid between BOBA, OLIVE, KOBE, CHEX, LATKES, and CHAI. The way to my puzzle heart is sometimes through my stomach! Also got a smile out of BOOP at 1D, and thank you to the editor and constructor for not cluing LET IT GO with reference to Frozen. 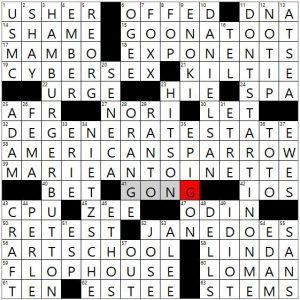 Tough beginning to end from BEQ today. I initially made progress down the left side but quickly started jumping around and never smoothly traveled through the grid. That’s not a bad thing in my eyes – more an indication that the difficulty level was even throughout.

*Five* grid spanners: HAMBURGER BUTTON, DEGENERATE STATE, AMERICAN SPARROW, MARIE ANTOINETTE, DONT START IN ON ME. The first is by far my favorite, even before the hard-but-spot-on clue [3d Menu provider]. Edit: Scroll to the comments to learn more about DEGENERATE STATE.

As other long entries go, I particularly liked ART SCHOOL and FLOPHOUSE stacked in the SW corner, and NIETZSCHE (at some point I learned how to spell it right on the first try, apparently) and DANIEL-SAN [10d “The Karate Kid” kid, to Mr. Miyagi] in the middle columns.

I learned a good bit from this puzzle: KILTIE loafers [21a], the cosmetics company Origins in the clue for ESTEE [62a], the words “herdwicks” (in the clue for 37d EWES) and EPIGON [35d Poor imitator]. LET [30a Touching stroke?] is a play on the tennis term. 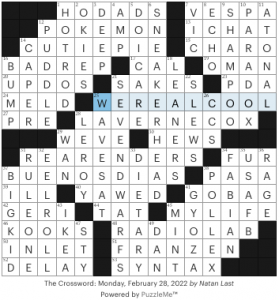 I’m always happy to see Natan’s byline on a New Yorker puzzle, especially when I get to blog it. I can count on being rewarded for knowing a good range of pop culture and culture in general, and on learning something new.

I knew the title of the Gwendolyn Brooks poem WE REAL COOL thanks to Francis Heaney’s book, Holy Tango of Literature, in which Francis anagrams poets’ and playwrights’ names to create the title of a parodic riff on the poem. GWENDOLYN BROOKS anagrams to WE LONG BONY DORKS, and Francis’s poem adhered to Brooks’s meter/structure, but was about Mathletes (about whom there have been written, I suspect, very few odes).

I learned that SEVEN DWARFS were in a play decades before the Disney movie came around; [Group whose members were named Blick, Flick, Glick, Snick, Plick, Whick, and Quee in a 1912 play]. Also did not know of MY LIFE, [Lyn Hejinian’s poetic autobiography whose most recent version, updated when the author was forty-five, consists of forty-five sections with forty-five sentences each].

Workable (for me) pop culture includes VESPA, POKEMON, CHARO, LAVERNE COX, GERI Halliwell, RADIOLAB, FRANZEN (though not that book title), LEROY, current slang SNEAKERHEAD (what a great clue! [Someone who might spend a lot just for kicks], where kicks = sneakers), FABIAN, and DAN Levy. Note that Natan’s references range from the 1950s to present, with TV, film, literature, and music—something for everyone. Inevitably people who don’t know pop culture from the past 30 years will complain that Natan leans too heavily on it.

Other fill I liked: CUTIE-PIE, BUENOS DIAS, PUDDLE, GYOZA, SHAMPOO with a Hindi etymology clue ([Word derived from the Hindi for “to massage”]).

Know your anatomy: The thumb is called the POLLEX in Latinate anatomy terminology. The big toe is the hallux. I don’t know the names of the smaller digits. One, two, three, and four?

4.5 stars from me, because I enjoyed the puzzle and flowed through it without getting stumped on anything. 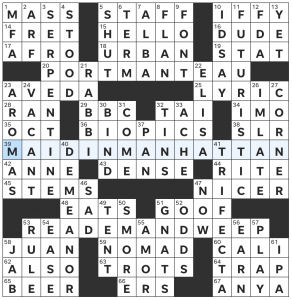 Apologies for the late / short write-up, it’s been One Of Those Mondays.