Happy weekend to you all. I hope this post finds you hanging in there. For any Ukrainians checking in, our hearts are with you.

On an escapist note, let’s tackle this week’s Sunday NYT (Sheldon Polonsky’s second puzzle for the Times), which takes the titles of movies and anagrams them to some more-or-less apt descriptions of those films: 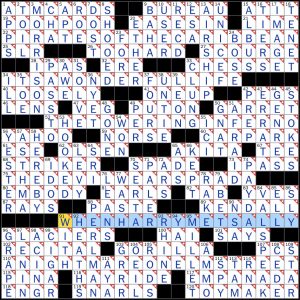 The real find of this set is the WHEN HARRY MET SALLY anagram description. It gave me a much-needed laugh, and I hope it (and the other theme entries) brought you joy, too.

Other random thoughts:
50A: GARRET [Unfinished attic space] – This was new to me!
60A: CAR PARK [It’s a lot in London] – Clever!
36D: NYET [Opposite of da] – Interesting editorial choice to keep this in the puzzle…
69D: I DOS [Certain partners’ exchanges] – I really appreciate the gender neutral clue here. My husband and I’s I DOS are included!
72D: ARS [Harvard dropouts, maybe?] – This took me a beat, but this made me smile and remember my visit years ago to Hahvahd Yahd.
114D: RNA [Vaccine molecule] – Nice, modern clue for this otherwise standard bit of crossword fill.

That’s all from me for now. Be well and stay safe. Ukraine, we’re pulling for you. 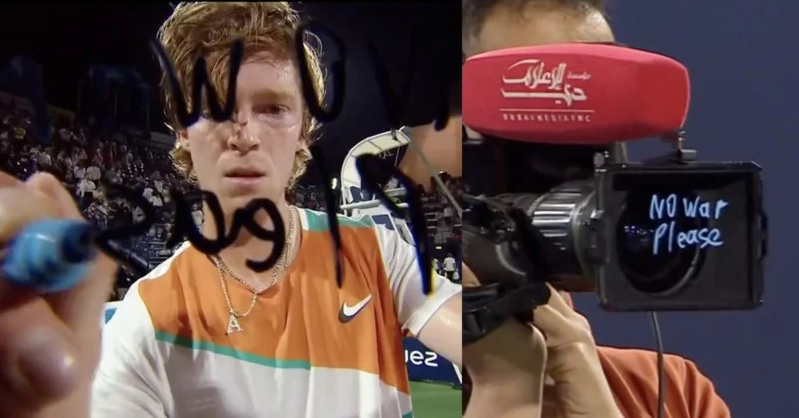 I’m confused. I know I’ve seen circles in Universal Sunday puzzles without the awkward square-counting clues (square counting is only appropriate in a toilet paper shortage, amirite?). But here we are counting squares again. Thankfully in this instance, those of us with circles in the grid can easily ignore all that extraneous verbiage and focus on the entries. 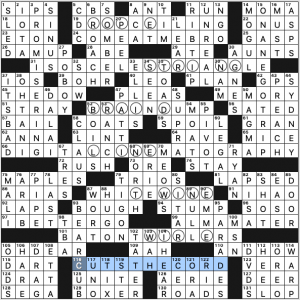 Um. Wow. This was masterfully done. Think of all the things that needed to happen to put this set of theme answers together. Our constructor needed to find synonyms of “cord” inside familiar phrases, but those synonyms needed to be broken up by a single letter. And note that some of these synonyms are five- and six-letters long. Not an easy feat. Not only that, but that single letter needed to be a specific letter to help spell CANCEL. Not only that, the phrases needed to be interesting and solvable, and last but not least, fit somewhat symmetrically in a grid.

This last point is aided by the fact that the grid has left/right symmetry, not the usual rotational symmetry. So the entries need only be an odd number of letters in length and don’t have to match with a partner theme entry. But still, this is really impressive with lovely finds like ISOSCELES TRIANGLE and the grid-spanning DIGITAL CINEMATOGRAPHY.

And yet, on top of all that, the fill was smooth and pleasant throughout. I love PROMISE RING at 3d and COME AT ME BRO at 24a. ON AN EGO TRIP is not quite as good, but it’s good still. Elsewhere there’s “I BETTER GO,” BEAR CUB, PARADES, ALMA MATER, “OH DEAR!,” “IT’S BAD,” THE DOW, NI HAO, “AND HOW!”

RIB TIP was a little weird going in. I don’t know that I’ve ever heard that phrase. And I didn’t know the name Shohei OHTANI, but then sports is one of my weaknesses.

Sing in me, Muse! And through me tell the story of that man skilled in all ways of contending, the wanderer, harried for years on end!

THEME: Book titles become wacky titles when a letter is moved to a different spot. 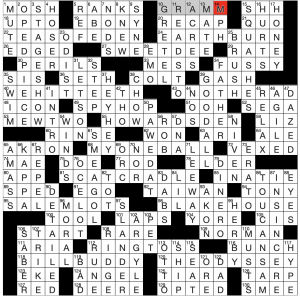 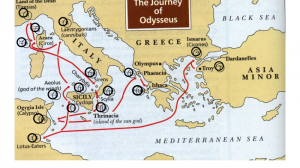 Excellent from start to finish. Once I figured out that a letter traveled, and the first word in the title wasn’t simply being anagrammed, it became more fun (and challenging) and I sensed there would be the Birnholzian layer- in this case revealing THE ODYSSEY. Though I must say, I posit that there’s a lot less travel than most would think in THE ODYSSEY… it’s a long journey, but Odysseus gets sidetracked a lot… like being stuck on an island with a sex-starved nymph for like seven years or something. Also, for such a cunning fellow, he coulda used some help in the navigation department. Ithaca is way closer to Troy than his journey would lead one to believe.

Anyway, very notable books (HEARTBURN is new for me, but it looks like a very well-known title), starting with my favorite of all time, EAST OF EDEN. That’s my go-to when forced to answer that unfair What’s-Your-Favorite-(fill in the blank) question.

The resulting phrases are great too. My fave is WE HIT TEETH, followed by ONO THE RAD. BILL BUDDY also brought a smile.

And hey, Evan… can you please let me in on some of the clues that ran through your mind for MY ONE BALL before you settled on the very safe [Michael Lewis book about the only formal dance he ever attended?]. I can think of some pretty good ones.

Fill felt hard for me, but I was solving while trying to monitor stage crew as they prepare for our school’s spring musical, so that was a bit of a mess for me. GRAMM and SWEET DEE crossing the difficultly clued MATE [Animal kingdom partner] was a very tough spot as I knew neither of the names (could be GRAHM and DEB) and I couldn’t not think of [Animal kingdom partner] as some sort of cryptic clue as whenever I see “partner” in a clue, I always think I’m looking for a ______ & ______ kind of answer.

All in all, very well done and solidly executed. A crowd pleaser for sure.

My seniors (mostly) love The Odyssey- Comparing it to O’ Brother Where Are Thou is a fun assignment.

THEME: Last names of celebrity chefs can be found in the first word of common phrases. 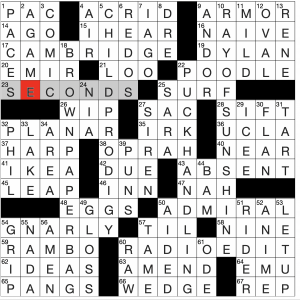 Alton BROWN isn’t familiar to me- Google seems to think that’s it. I’ve only recently started dabbling with cooking, so The Food Network is never on in my house. I knew the others quite easily though.

Solid theme! Well presented. A nice little nod to Emiril’s tag line in there too with BAM!

Really liked the clue for DRE [Nickname hidden in “gold record“]. Universal gives lots of clues like this, but sometimes they are not apt. In this case DRE being found in “gold record” is very apt. I wish they were all like this!

Thanks for this puzzle! 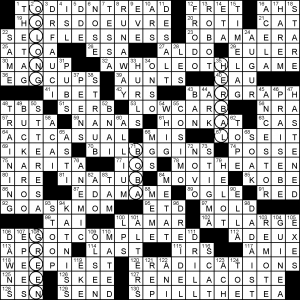 The title in Katrina Lee’s puzzle doesn’t give too much away, but the circles sure do. I quickly discovered that they always satisfied “___ tea”. It took a little longer to figure out why certain across answers wouldn’t work though. The LA Times officially has a no rebus puzzle rule, but puzzles like this have a similar feel. Each of four across answers has a hanging chad made out of a tea type that must be inserted into the middle for it to make sense: T(OOLONG)DIDNTREAD; AWHOLEOT(HERBAL)LGAME, BIL(BOBA)GGINS, and DE(GREEN)OTCOMPLETED. It’s a fun way to include extra-long theme answers that are difficult to include even in a Sunday puzzle. Personally I haven’t ever heard of the last answer, though it was inferrable, nor the final revealer: SPILLTHETEA. It seems to be a neologism of sorts, and hyper-American? Americans sure do love wasting tea!

There were several other “out of my wheelhouse” answers today, including where I had my error:

I also appreciated an ANEMIC clue as [short on iron, maybe] referring to its medical meaning rather than some wishy-washy “weak” angle.

Theme: Each theme answer includes BPA, which is often used in the production of plastics, spanning the two words in each answer. 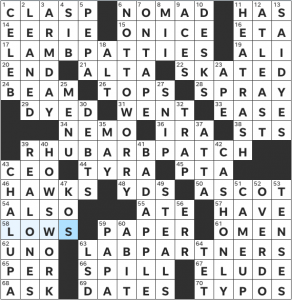 Shout to Sally Hoelscher’s blog today in helping me understand that the titular additive was BPA, which immediately led to a “duh!” moment for me. I thought it was interesting that each themer began with P, which both threw me off and also was interesting since oftentimes themers will try to split up the hidden word differently. However, I really liked the theme answers. Both LAMB PATTIES and RHUBARB PATCH made me hungrY. Rhurbarbs also always reminder me of a favourite summer cocktail that combines rhubarb with strawberries, so I’m longing for warmer days.

Grid-wise, this was a really interesting asymmetrical grid. We get some mirroring in the 5-5-3 upper- and lowermost sections of the grid, but this diverges when we hit the center, getting several Tetris shapes. I think that this works well for the relatively open corners, but the bottom middle section does feel a wee bit segmented off from the rest of the grid, though NOT TO WORRY and BAD APPLE seem to connecting the top and bottom halves of the puzzle together.