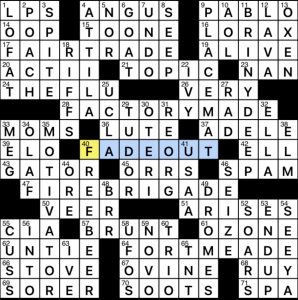 Let’s go over this week’s theme before it dissolves:

So the effect of an image slowly disappearing in a film is represented here by the letters in FADE appearing at the outer edges of the theme entries. Nice! 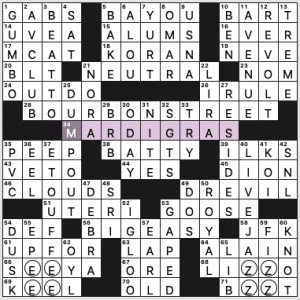 It’s Paczki Day! Also known as MARDI GRAS, which is the theme of today’s puzzle. The answers to starred clues all pertain to New Orleans, Louisiana, and Mardi Gras: BAYOU, BOURBON STREET, the BIG EASY (which connects to the circled boxes: a 2×2 box of E’s and a 2×2 box of Z’s … but wait a minute, That’s E’s Z’s, which is not pronounced like EASY, and neither 2×2 chunk is shaped like a big E or Z), OLD Square, GUMBO, St. Charles or Esplanade AVENUE (not symmetrically paired with a theme answer, feels off kilter), the TV show TREMÉ, ETOUFFÉE, and LIVE JAZZ played at Preservation Hall.

Five things from outside the theme:

The revealer is in two parts starting at 51d [With 65-Across, investigation site, and a punny description of the HEIST answers]: CRIME / SCENE. The other theme answers are all idiomatic phrases with theatrical origins and are purported to be acts from a play entitled HEIST. They could also be punny crimes with a little imagination. 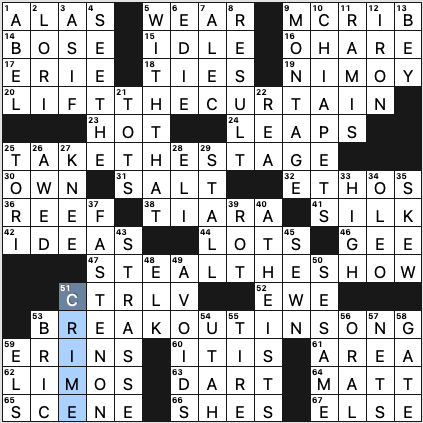 I like the creativity here although I have to admit it took me a while to piece it all together. I was thrown off by the fact that three of the entries start with a synonym for “thieve” and the fact that nothing’s being stolen in Act 4. So in that respect, it felt a little disjointed with that last entry.

But the revealer says they’re all punny crimes, and I’m good with that. Although if “breaking out” is meant to be a crime, that means the perpetrators have already been jailed, and yet that doesn’t seem to be part of the show. Maybe I’m overthinking it.

WITH THAT, let’s move on to the fill where we find highlights CHIA PETS, ATHEISTS, and MONTAGE. Note how theme-dense that SW corner is with the starts of two long themers and both revealer entries. And yet, it’s not terrible. Plural ERINS is the most awkward thing down there unless you don’t like CTRL-V (which I do since I use it a lot).

I didn’t know what was going on with this theme until I got to the revealer. That’s not unusual for me with an early-week puzzle. The theme clues are straightforward and made for a smooth solve and the revealer was satisfying. 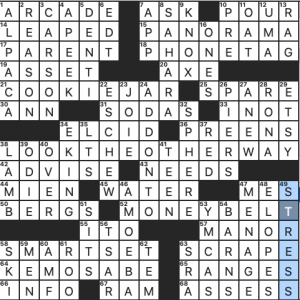 And the revealer: 58a [Fashionable group…and what the starts of 18-, 21-, 38- and 52-Across form] is a SMART SET. SMART PHONE, SMART COOKIE, SMART LOOK, SMART MONEY. Solid theme set and decent fill despite the density of theme squares.

What I didn’t know before I did this puzzle: I got nothin’, which means there wasn’t much movie or gaming content.

This week already feels long and it’s only Tuesday, which means that it’s a perfect time for today’s puzzle “Motivational Tips“! With fun clues, great fill, and a unique grid, what’s not to love? 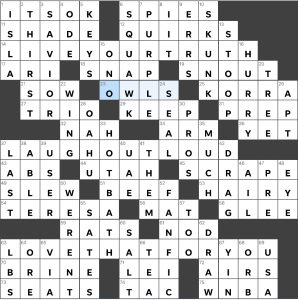 Theme: each themer is a good piece of advice

At first, with 1a being a quote clue, I wasn’t sure if there would be themers sprinkled throughout, especially with the descending nature of the grid. However, as the longer entries filled in, the three themers revealed themselves. LIVEYOURTRUTH took me some crossings, as it’s not as familiar to me. LAUGHOUTLOUD filled right in and it’s so fun that this tip is spelled out, as it’s usually an acronym. LOVETHATFORYOU is my favorite themer though I needed a few crossings to get it, as the clue didn’t quite click for me—maybe “your” in the clue would have worked better for me, although I usually think of it more as an affirmation of a styling or attire choice. Also, h/t to Sally for pointing out that the first word of each themer also combine to make the well-known phrase LIVE LAUGH LOVE; check out her blog post for today for her insights and constructors’ notes!

Stumpers: SEATS (“stool” and “sofas” were on my mind), TREE (shouldn’t have been as tricky but I was thinking about flowers and shrubs), and BEEF (needed crossings for this use of it)

Playing on the mobile app means that while solving, some of the grid is always off-screen so it’s the last thing that I notice usually since the entire grid only fills the screen once completed. So for grids like today’s it is the last thing that I see and usually didn’t get much of my attention. Looking at the grid more now, while I got a sense of the stair-stepping or descending feel, I hadn’t noticed the asymmetry in the rest of the grid which I think works quite well and while there’s lots of black squares of the eastern edge, the rest of the grid is balanced out. 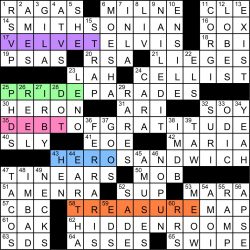 Hello there, everyone. My deepest apologies to all of you for being tardy with this post, first and foremost.

I do hope you had some fun with this puzzle without my immediately commentary, though this was a grid that definitely had a tricky spot or two. In the grid, each of the five theme entries start with a word that can also come after the word “national.”

I don’t think this is the first time I have seen the word ENSILE, but I definitely can say that I had not seen/heard it more than three or four times ever before today’s encounter (10D: [Store corn, say]). Having TACOS in a grid published on Tuesdays with the clue referencing Taco Tuesday is next-level special (47D: [“Tuesday” menu favorites]). Literally LOLed at the NO PUN clue, which, given my knowledge of dad jokes and bad puns, I’m surprised that I had never come across before now (46D: [“___ intended” (what the dentist said after “You know the drill!”)]). Loved the non-themed 11s stacked with a couple of the theme entries, SMITHSONIAN (14A: [American institution of note]) and HIDDEN ROOMS, which immediately reminded me of the Al Capone hidden vault bluster that turned out to be nothing and left Geraldo Rivera looking like a clown (62A: [Chambers behind moving bookcases]).

“Sports will make you smarter” moment of the day: FERRARIS (36D: [Sporty Italian wheels]) – The Formula 1 racing season is just around the corner (see what I did there?), and no true F1 can can watch the sport without acknowledging the impact that Ferraris have had throughout the history of the circuit. Scuderia Ferrari have won the drivers’ championship 15 times, the constructors’ championship on 16 occasions, and have won a total of 237 races. Some of the famous drivers of the famous red car include Michael Schumacher and a couple of crossword favorites: Niki Lauda and Kimi Raikkonen. Ferrari is experiencing a drought however, as it has not had a driver win the drivers’ championship since 2007 and last won the constructors’ championship in 2008.