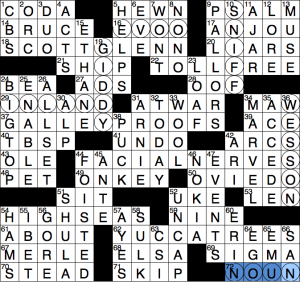 hello and welcome to episode #717 of matt gaffney’s weekly crossword contest, “Following a Pattern”. this week, we have another guest puzzle, this one from the great Patrick Berry, with the instructions telling us that we are looking for a six-letter word. what are the theme answers? i’m guessing they’re the six long across answers:

so what’s the theme? uh, yeah, that is harder. at first it seemed to be a very straightforward double double-letter theme (like the title), but if that’s the case, then FACIAL NERVES and HIGH SEAS don’t fit. there are a handful of other grid entries with one pair of double letters, but none that have two.

what else could be going on? HIGH SEAS has SEAS which sounds like C’s, and C’s are one of the double-letter pairs in YUCCA TREES. but if that’s what’s going on, there ought to be other homophones of letters, and i don’t see too many. there’s AYES and that’s it.

okay, hold on a sec. the double-letters might be incidental—i’ve noticed that in each of the six theme answers, the two words are the same length and could code for each other in a cryptogram. so the double-letters are in the same place within each word in the pair, and the other repeated letters that aren’t doubled (like the A in FACIAL, E in NERVES, H in HIGH, and S in SEAS) also occur in the same places. so that’s certainly interesting.

what else could we do? it’s certainly possible that there are six more hidden theme answers, each one linked to one of the overt themers. the grid is 16×15 with 83 words, which feels pretty high. it could also be that we’re supposed to do something with the title, which i’ve now noticed doesn’t fit the theme (which could explain why it was so hard for me to see the actual theme to begin with).

oh, maybe this is it: EVOO follows the same pattern as TOLL (and FREE). yeah, i think there’s going to be exactly one other grid entry that fits each pattern:

taking the first letters of those answers gives SEWING, which is an activity in which you might well follow a pattern.

whew, that was not easy. perhaps i was lulled into a false sense of security by matt claiming this was originally slated to run as a week 2, but i thought this was definitely worthy of a week 4. maybe because the title made it really, really hard for me to let go of the double-letters idea; once i finally did that, i guess it wasn’t all that tough, though there were still two more pretty significant ahas after that.

i greatly admire the construction of the puzzle, by the way—it can’t have been easy to enforce a unique entry in the fill matching the pattern of each theme answer. there are plenty of other fill answers with a repeated letter (as there should be, otherwise you could get the answer via the back door even if you didn’t quite understand the mechanism), so it’s only care and craftsmanship that allowed patrick to make sure the meta mechanism worked cleanly. and it sure did!

that’s all for me this month. how’d you all like this puzzle?