This adorable theme is composed of puppy-based puns. I really enjoyed Rasa’s solo debut and can’t wait to see more of her work! 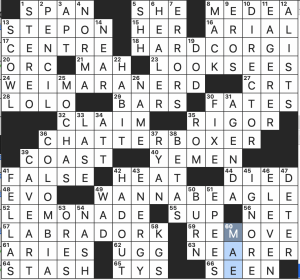 All the theme answers work well and they’re all cute as can be. Fun!

What I didn’t know before I did this puzzle: never heard of Bhimbetka. Did not know that RYAN Coogler directed “Black Panther.” And I’d never heard of Gladys MAE West. I should have. 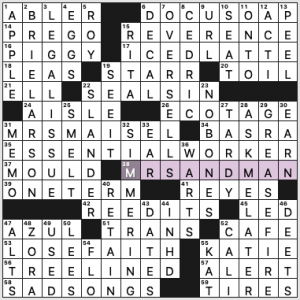 Fun puzzle, but it felt more like a Saturday puzzle to me. Did you all find it harder than expected, too?

Fave fill: ICED LATTE, MRS MAISEL and MR SANDMAN flanking an ESSENTIAL WORKER, ONE-TERM, LOSE FAITH, SAD SONGS (they say so much—and wow, I hadn’t remembered how much the Elton John video was an exploration of hats), BRIE LARSON, NO BONES, and “ASK ME LATER.” Lots of good stuff here. 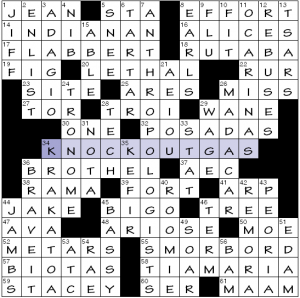 I appreciate how the various instances are distributed in different parts of the host words: beginning, middle, end.

That’s all I’ve got. Fun theme, works well. I slight change of pace from the norm. Going to finish up with two more songs, for a total of four (!). First, something from  Squonk Opera’s Bigsmörgåsbørdwünderwerk—because how could I not? And then something that’s a bit of a KNOCKOUT. 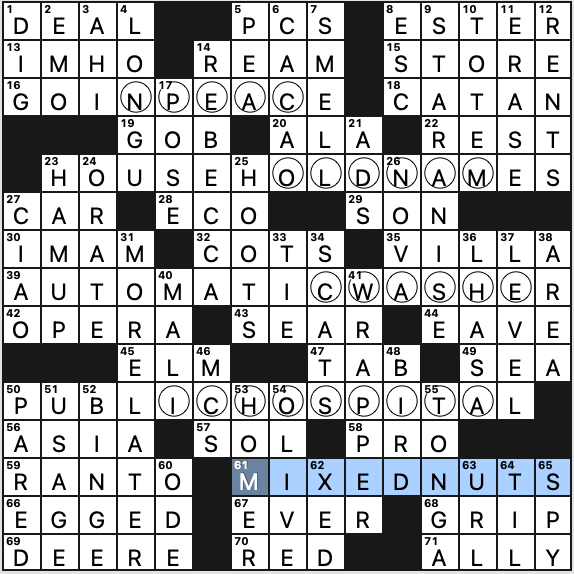 Earlier today I was on Onelook (an online search site that many constructors utilize), checking out its new ability to search for anagrams embedded within other words and phrases—exactly the sort of thing going on here today. I’m really impressed with that pistachio find, which turns up when you do the anagram search at Onelook. (Basically, you go to onelook.com and type “*//pistachio//*” in the search bar without the quotes and it will find instances of where those letters show up in other phrases in any order.) In addition to PUBLIC HOSPITAL you get another hit with “psychiatric hospital” and—also impressively—”sophisticated,” with only four extraneous letters. Fun stuff.

The theme entries here are well chosen, and I like that all the nuts are at least five letters long. (Of course, there aren’t really any common one-word nuts that are shorter than that.) So even though I didn’t readily figure out the anagrams without the revealer, I enjoyed the aha moment it provided.

STAR ANISE tops the fill today. Its counterpart is “MORE LATER” [“I’ll tell you the rest in a bit”]. Is this something people say? I can’t say that I’ve encountered it very often. The other long entries are a candy bar WRAPPER and REBECCA Black of “Friday” fame. Remember her? 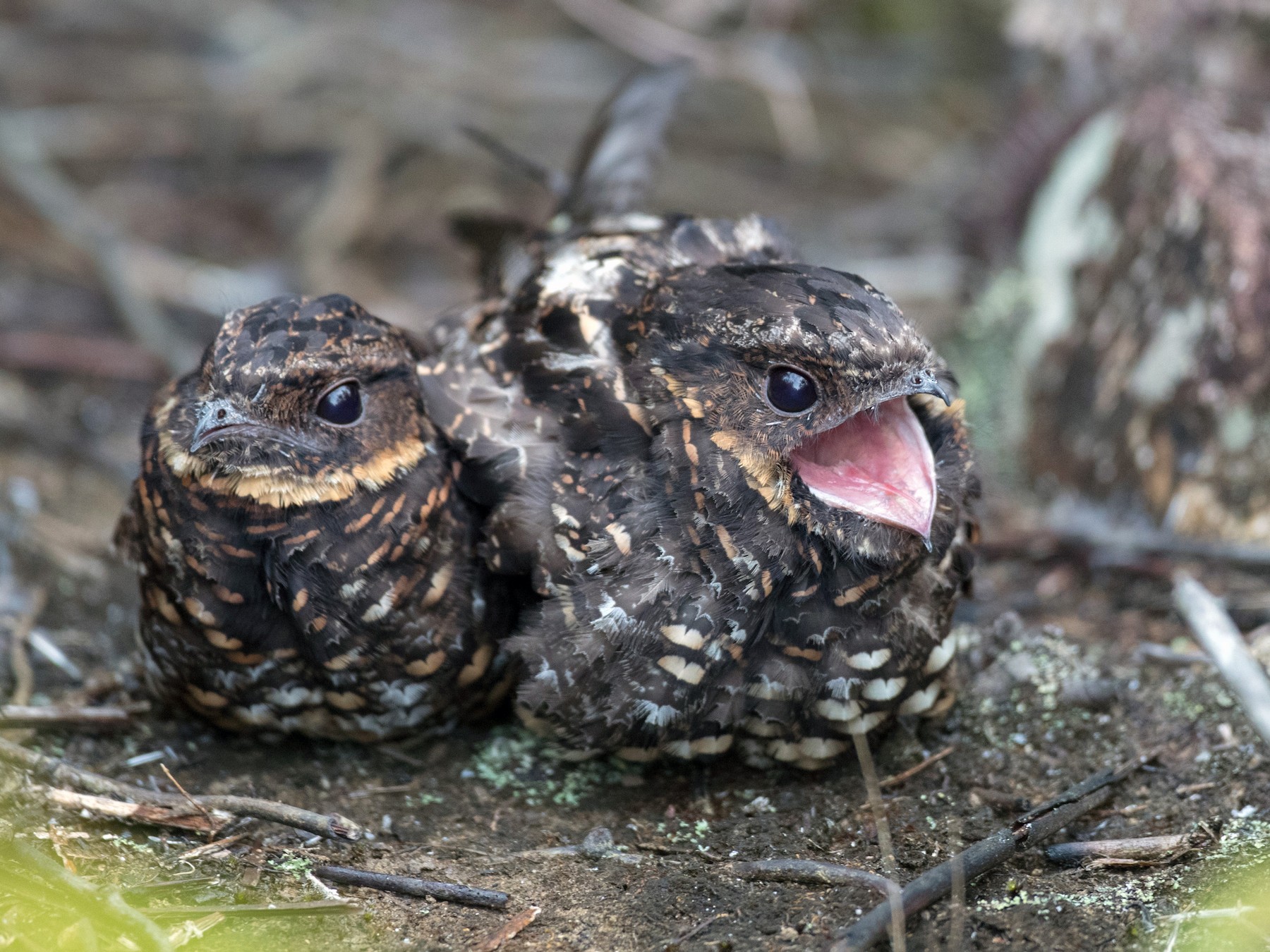 48d. [Satanic nightjar or nightingale]. BIRD. “Satanic nightjar”? For some reason, I’m envisioning Satan wearing facial night cream. But apparently a nightjar is a type of bird, and the Satanic part comes from the sound the bird reportedly makes. Per Wikipedia, “the bird makes a ‘plip-plop’ call like dripping water, which locals have also likened to the sound of the bird pulling out a person’s eye.” Yeah. I don’t know what that sounds like exactly, but I guess I’ll take their word for it. 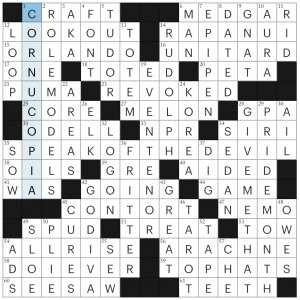 Good morning, friends! I didn’t finish this puzzle correctly because I had “Ariadne” over ARACHNE, but I did eventually get there. Entries I liked were LOOK OUT, SPEAK OF THE DEVIL, ALL RISE (clued as [Order in the court?]), TOP HATS, CORNUCOPIA (although I would have liked a little “Hunger Games” reference in the clue), ROLE MODELS, and GODIVA. I liked FRITTER as an entry, and would have preferred a clue that referenced the delicious fried treat rather than the “fritter away” angle.

A predictably lovely puzzle, thanks Caitlin! Also worth noting that I went word by word through the grid and could not find a single piece of fill that I found to be glue-y, which is so, so impressive. (SLOE and GRE were the closest, but I consider those completely valid.)

Theme: Each theme answer ends in a word that is a type of note. 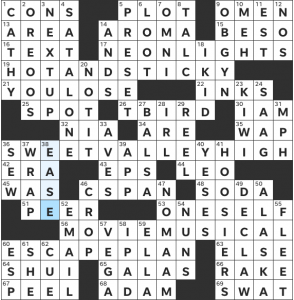 I thought that this was a really fun Friday theme. I felt like these were very creative themers. I was not familiar with the SWEET VALLEY HIGH series, but the crosses filled it in pretty easily. Plus, it was easy to infer some of this fill as well. I sat for a bit with 17a [“Bright, gas-filled tubes”] NEON LIGHTS and 60a [“Strategy for getting out”] ESCAPE PLAN, wondering if they were also part of the theme, but generally, I loved how they stacked here.

This grid is symmetrical, and it has such rich fill. OREO OS, the 2d [“Cookie-flavored cereal brand”] was another one of those OREO-centered answers that I couldn’t help but laugh at. I also really enjoyed 42a [“Atlantic ___ (period of Aretha Franklin’s career)] for ERA. Overall, I thought that this was a really smooth fill with some great references.

That’s a WRAP on my thoughts for this one. Have a good weekend!