I often try to guess how the theme will play out based on the title. Sometimes I even get it right, like today.

The theme answers are all names (of men) that all contain MAN somewhere within. The MAN portion turns upward before returning back to the Across entry. The revealer is an apt “MAN UP” (57d, [“Get a backbone!” (and a feature of four of the puzzle’s answers)]). 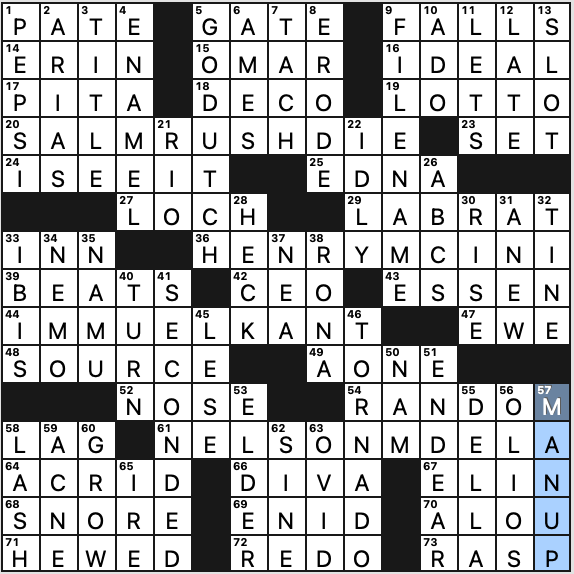 I’m not sure why all the theme answers are famous names nor why they’re all men. I guess it’s a nod toward consistency. But I wouldn’t have objected to including some women in here. Mandy Moore, Barbara Mandrell, and Nicole Kidman were probably available for this gig.

There are a lot of other proper names aside from these, so if proper names aren’t your thing, this was probably a slog. Let’s see, we’ve got ERIN Burnett, Ilhan OMAR, Sally Field character EDNA, Tiger Woods ex ELIN, baseball’s ALOU family, old actor Leon AMES, clownfish NEMO, RONA Barrett, DELLA Street, and OVID. Whew, I didn’t realize there were that many. Some of those could have been reclued as something else (like AMES), and that crossing of ELIN and OLIOS is not pretty. At least ENID was clued as the Oklahoma city. But we have to be well over the limit with proper names in one puzzle here.

Highlights include GO DUTCH, LAB RAT, TORNADO, and “I SEE IT!”

It’s a good theme, but I can’t say it did a lot for me. And the fill, though it had some highlights, felt very gluey. 3.25 stars.

The title had me thinking there would be I’s missing from each theme answer. Not exactly. I had no idea what was going on until I found the revealer – both of them – and the aha! moment was very satisfying.

10d is [Typical law school stint] which should be THREE YEARS. There are only four letters. I wondered if there was a rebus of some sort and figured I’d keep going until something made sense. 32a [Bird with a long brushlike tongue] clearly wasn’t HON, so maybe HERON? Hmm. So I went on and remained mystified. Then I got to 52d [With 55-Down, narrow-mindedness…or what you need to see your way through this puzzle]. That turned out to be TUNNEL VISION, so then I thought maybe the missing letters were somewhere else in the grid. I couldn’t find them. Finally I got to 44a [Fight results, maybe…and the theme of this puzzle] which is BLACK EYES. So maybe the letters EYE are in the BLACK squares? That’s it! The three black squares that stand in for EYE are a TUNNEL leading to the rest of the answer. Aha!

I’m showing you Peter’s grid instead of mine because it has the EYEs filled in, which makes it clearer. 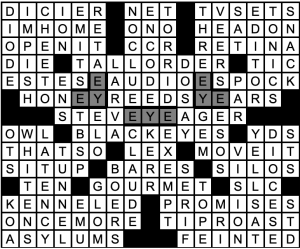 RETA Shaw and STEVE YEAGER are both a bit obscure. The crossings are all fair (well, I guess if you don’t know the band ELO they might not seem that way, but I think if you’ve done any crosswords at all you will figure that out) and the obscurity is OK with me in service of a well-executed, fresh theme. I really enjoyed this one.

What I didn’t know before I did this puzzle: that “Emu Today & Tomorrow” is a thing that exists. See for yourself – but be warned! The banner photo is a bit unsettling. 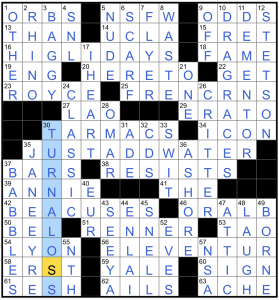 I spent far too long on today’s puzzle trying to figure out how rebus squares worked:

I could tell HHO was in the theme answers, but it wasn’t working with the downs.  Of course, 35A really spells it out:

Speaking of BEACH HOUSES, the Baltimore band of that name is currently celebrating having the album with the highest amount of physical sales this week with their newest, Once Twice Melody.  It’s pretty great. 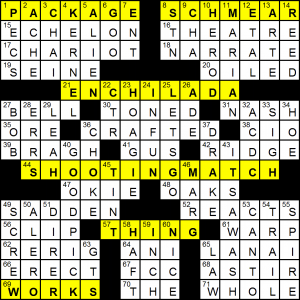 Today’s puzzle by Jeffrey Wechsler features a theme basd on a collection of similar idioms, with an interesting presentation of said, all of which are clued basically. The puzzle’s final two across answers are THE/WHOLE and each of PACKAGE, SCHMEAR, ENCHILADA, SHOOTINGMATCH, THING and WORKS can be completed by that. I’ve personally never heard of THEWHOLEWORKS, only THEWORKS, but it’s in the dictionary?

The grid was carefully designed and well balanced. For better or worse, there wasn’t a lot that stood out. The two longest non-theme entries were GOODPICK and ITSAWASH, the former a little contrived, but guessable.

Ada Nicolle’s USA Today Crossword, “All of It” — Sophia’s recap

Editor: Erik Agard
Theme: Each theme answer is of the form _ALL OF ___. 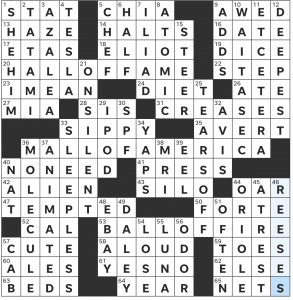 Crazy busy day for me today, so just some quick notes on the puzzle:

Theme: The theme answers include a stacked set in which STEP appears in each top answer and RAKE in the answer underneath.

Revealer: 64a [“Suffer embarrassment by your own actions, and a hint to this puzzle’s theme”] STEP ON A RAKE 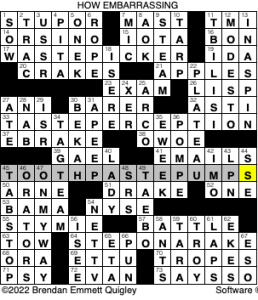 It took me until I read the comments on this post to figure out the theme, so thanks to the 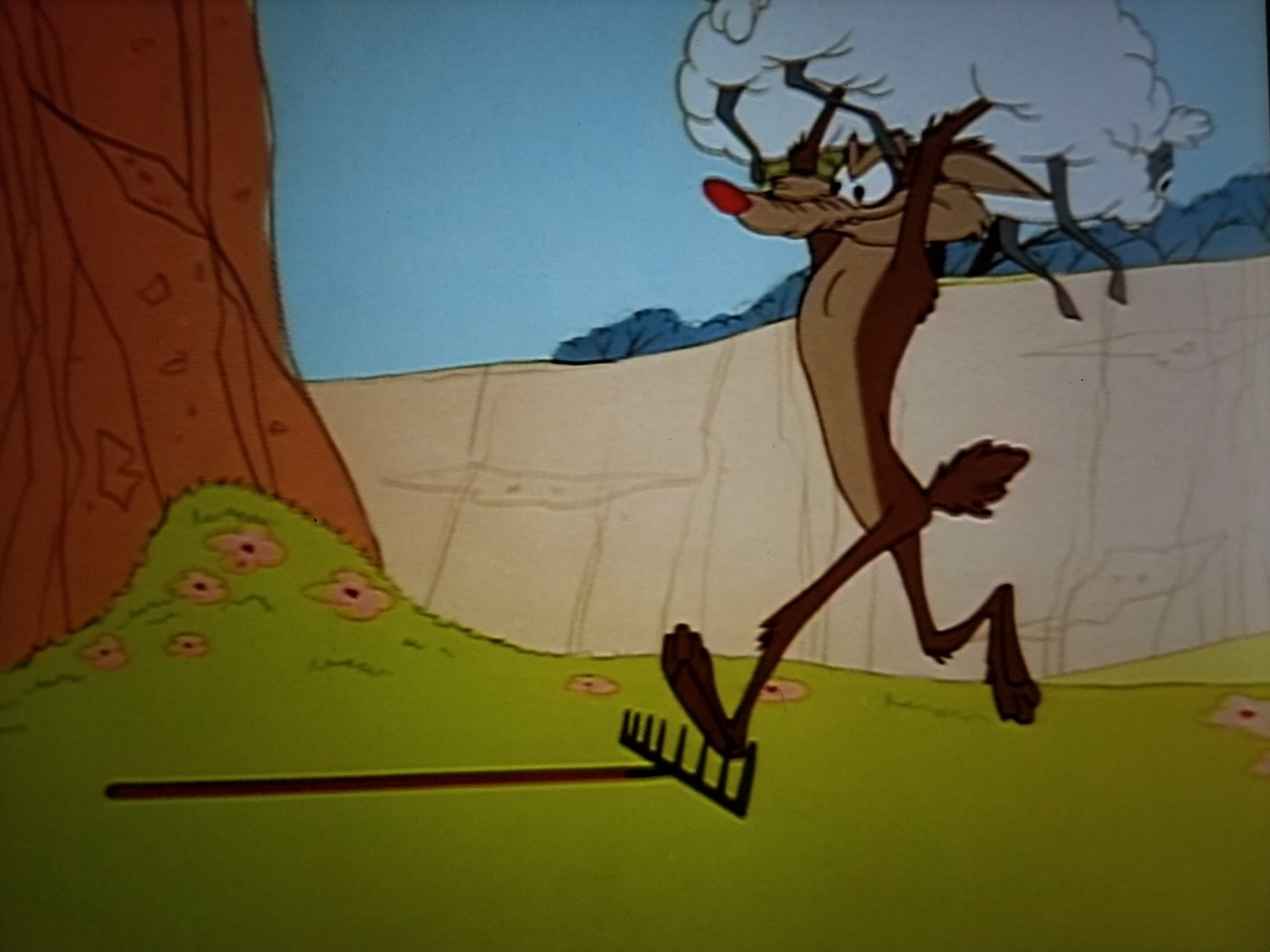 team of commenters for help! I had a hard time with a few of the RAKE answers, like EBRAKE and CRAKES and caught both of them on the crosses. TASTE PERCEPTION also threw me off a bit. However, I thought that this bit of slapstick humor was such a fun and clever puzzle theme. It didn’t feel like any of the answers were too heavy of duplicates. It’s also pretty impressive that this grid maintained its symmetry throughout.

I thought it was interesting that the USSR was clued as 3d [“Where Volodymyr Zelenskyy”] was born. I appreciated the inclusion of Zelenskky considering the injustice of Russia’s invasion; However, I feel like this dichotomy doesn’t accurately portray Ukraine’s sovereignty. Outside of that, I liked IN A SPIN a lot, as well as TAB STOP. 22d [“Flat land”] PLATEAU was also fun to see, as was 34d [“Wrestling partnership”] TAG TEAM.

That’s all from me. Sorry for the late post. I’ll see y’all first thing tomorrow.