Greetings, puzzlers! If you like meta crosswords, you’ll be glad to hear that Patrick Berry has a new puzzle suite: “Heavy Meta” is a set of nine meta-crosswords, the last one being a “meta-meta” that links the set together. The difficulty level is equivalent to the weekly WSJ meta crossword. A supersized version of the variety puzzle Trail Mix (14×21) is included as a bonus. The price is $15, and you can find “Heavy Meta” (along with Patrick’s other puzzle extravaganzas, cryptic crossword packs, and his Crossword Constructor’s Handbook, which any budding constructor should have) at the A-Frame Games site.

Happy weekend! I hope you’re all doing well and excited for the treat of a Stock/Nediger collab puzzle. 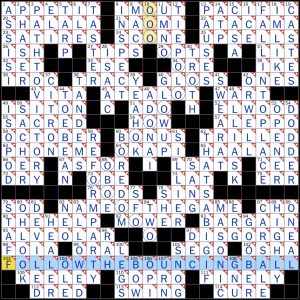 It turns out that this grid is the crossword interpretation of a PACHINKO game! This was a new word to me, but I’m now making a connection: is this why Plinko from “The Price is Right” has that name? At the very least, I was able to find this article on pachinko vs. Plinko. All the same, the ball at the top of 10-Down is bouncing through the grid (all the Os in the circled squares) down into the bottom cup (the O in TWO at 84-Down). In the grid, we can visually FOLLOW THE BOUNCING BALL through its PATH TO VICTORY and see the game ball FALL INTO PLACE. Pretty neat! What did you think? Was the construction and visual effect worth the grid shape and fill for you? It was for me.

Other random thoughts:
– 21A: NAOMI [Klein who wrote the best seller “This Changes Everything: Capitalism vs. the Climate”] – This is a great example of injecting ideas and ideals into puzzle clues!
– 25A: UPSELLS [Convinces a customer to pay more] – I like modern fill like this! Kudos also to entries like IM LIKE at 18A and GLOW UP at 40D.
– 27A: TIPS [Much of a delivery person’s income] – Until you’re willing to help change the system to make sure service industry folks can earn a livable wage without tips, you’d better be tipping for service, especially these days with all the extra difficulties of being a service person in COVID times.
– 112A: DRED [Scott who sued for his freedom] – If you don’t know his name, you should (and not just for crossword fill).
– 44D: TOE BEAN [Pink pad on a paw, in slang] – This made me say awww and go snuggle my pup.
– 77D: SFO [Airport with a Harvey Milk terminal: Abbr.] – This type of simple but effectively LGBTQ+ representation means a lot to me as a queer solver.

That’s all for now. What did you enjoy about this puzzle? Let us know in the comments section below. And be well!

Theme: Familiar phrases are missing Ts at the ends of certain words. Based on the title, I’m guessing there are 10 such theme entries. *counts* Yup, 10 of ’em. 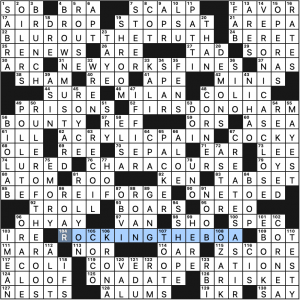 A fairly simple theme, but effectively executed. I like the consistency of limiting the dropped-Ts to the ones at the ends of words. It helps the solver out towards the lower half of the grid.

And ten full-sized theme entries is a lot, even for a Sunday-sized grid. Kudos to our constructors for pulling that off. I wasn’t counting as I went along so I did get confused for a bit thinking that 67d CREATES A STIR was a theme answer. Eventually though I saw the clue was not asterisked.

With so much theme material, you’d expect a lot of compromises in the fill. On the contrary, it felt fun and fresh. I liked the aforementioned CREATES A STIR and its counterpart BROWN MUSTARD as well as shorter stuff like AIRDROP, COCKY, “OH YAY!,” BRISKET, SHROOM, DEMONS, NI HAO, BOOP, NOOB, and OBVI.

I wouldn’t normally list a three-letter answer in the highlights, but I’ve never seen IKR in a grid (or even IRL for that matter). But I inferred it means “I know, right?” which is something people say (maybe too much). Oh, also SRY [“My bad,” in a text], which I have seen IRL.

I was surprised at the dupe in RULER OF THE ROOS and ROO. Yes, ROO is clued differently [Quintana ___ (Mexican state)]—in a way I would never get without the crossings—but that second O was my last letter in the grid since I was resisting it so much.

Also, I didn’t know Z-SCORE [Distribution curve calculation]. I tried Z-SLOPE at first. If you know what a Z-SCORE is, please elucidate us on its usage.

A smoothly executed theme and grid. I didn’t LOL at any of the theme answers, but I appreciate their liveliness and consistency. 3.75 stars.

Theme: Each theme answer ends in a type of grain. 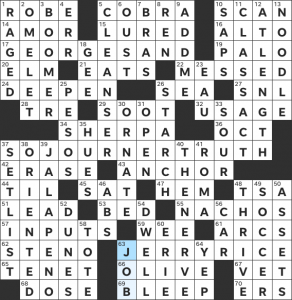 The trio of names here as themers truly do make a “Grainy Bunch.” I was only familiar with SOJOURNER TRUTH, so I caught both JERRY RICE and GEORGE SAND on the crosses, all of which were very fair to balance out the challenge of such a name-oriented theme. This was also complimented by a lack of names anywhere else in the fill.

This was an asymmetrical grid, and I think that this lent itself well to the number of answers with more than three letters. The lower section with the smattering of black squares around TIL / SAT / HEM / TSA felt a little tight and closed off, but this was remedied in the way that it opens up right around in the center of the puzzle. 11d [“Gem of a person”] CLASS ACT, 13d [“Long pool toy”] NOODLE, and 40d [“‘Such chutzpah!’”] THE NERVE were my favourites of the longer answers, but generally, I really enjoyed this fill. 9d [“TikToker’s request”] ADD ME was also pretty funny and felt very fresh. 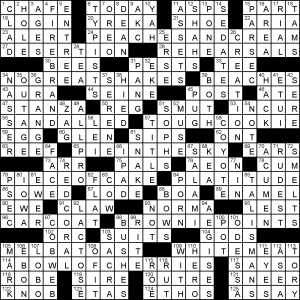 Today’s puzzle by MaryEllen Uthlaut features a broad theme of phrases associated with pudding not used literally, but clued such that they nod to the pudding in passing. Also, not all of them are typically desserts, and some of them are long partial answers. Therein lies the chief problem with Sunday crosswords – unless you have something groundbreaking, you either define your theme tightly and risk it being repetitive, or you let it wander all over the shop.

This one is for the birds.

THEME: Birds can be found “diving” downwards out of common phrases. The bird also makes up part of another word.

Not so familiar with the GREBE here, but another Birnolzian layer in a multi-layered puzzle? Wow.

Just googled that… especially apt that the GREBE is a diving waterbird. I feel like I should’ve known this. Guaranteed to be coming soon to a Wordle near you. 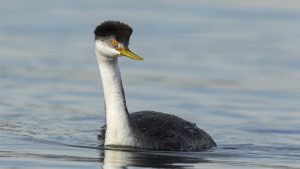 This was an outstanding puzzle. Although I’ve seen the concept of answers retreating from their traditional horizontal themers to take a downward turn, the way in which this is presented somehow feels very fresh. Perhaps it’s because it’s not just a single word retreating. There are two: MONGOOSE and GOOSE. And very consistent with the presentation. This is as tight as it gets.

Florence LaRue, Brittney Cooper, Staub, and a hat tip to the Red Bear Brewing Co. I hope they send Evan some swag.

Two other things to note: