Theme: The puzzle contains four dishes that are served cold, with REVENGE IS A DISH BEST SERVED COLD spanning the grid. 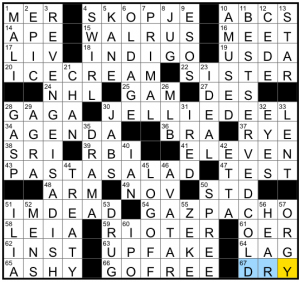 Congrats to Sam on his NYT debut! This puzzle is an impressive construction, with 6 theme related answers, two of which are grid spanning and cross two other theme answers each. That constraint limits the number of possibilities for each cold dish, since they have to:

That’s a tall order! As a constructor, I was impressed with how well Sam did at finding a grid layout and theme answers that worked with the central conceit. Sure, we can play “one of these things is not like the others” when it comes to JELLIED EEL, but that’s a minor knock in my opinion.

As in any puzzle with this much constrained theme material, there are good and bad parts to the fill. I liked the open areas in the top and bottom middle of the puzzle, particularly WALRUS and UPFAKE. Both of those areas took me a long time to get, however, given that I didn’t know SKOPJE and I had “log out” rather than LOG OFF. The ILIA/INST area of the puzzle felt like there must be some better fill possibilities in that corner. Also, tell me a 3 letter [Group of whales] and I’m going to say “pod” every time, no question. Having that answer be GAM, stacked on top of the first half of JELLIED EEL, felt rough to me. I ended up with an average Monday time, despite that the grid was undersized. Overall, this was a puzzle that I enjoyed, especially looking at it from a constructor’s point of view, but there were some tricky crosses that I wish were a little smoother to improve the overall solving experience.

This looks to be a debut, and it’s a nice one. 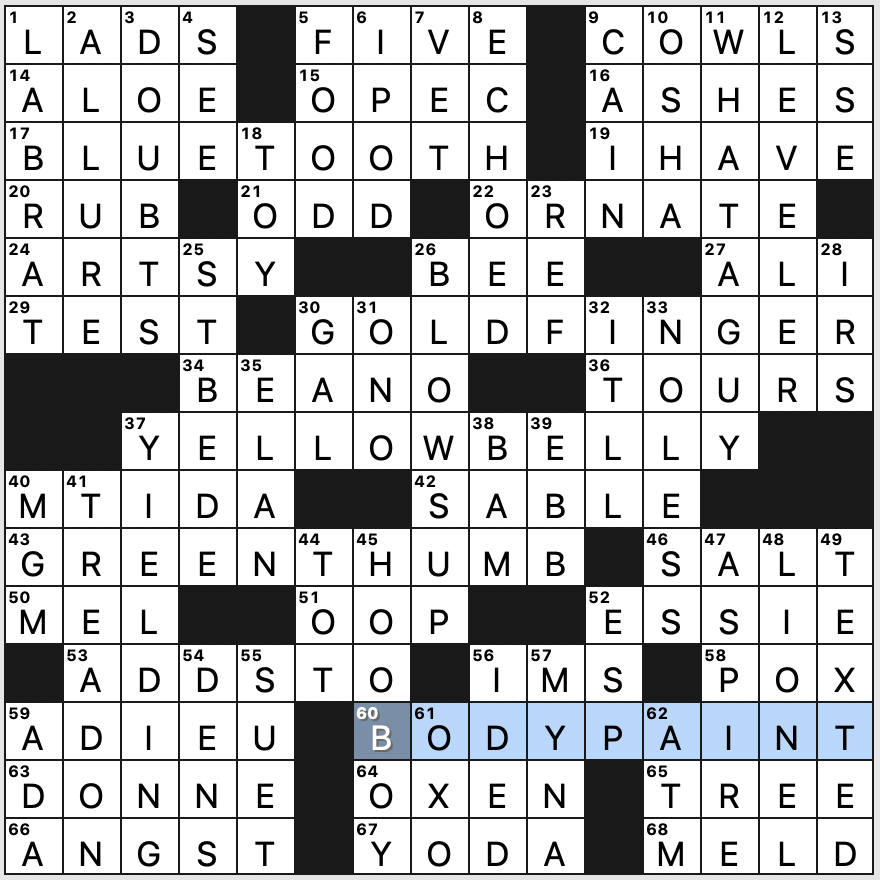 Very nice. I tried to think of other examples, but couldn’t get past “black eye” which, while not quite literal, is almost literal. Same with “redhead.” Can you come up with any others?

The fill is solid, though not especially sparkly. I do like BLOWS UP with its modern clue [Goes viral, say]. “WHAT A GUY!” feels a bit old fashioned, but still fun. Also fun: “HOO BOY!”

There’s a fair amount of crosswordese (MT IDA, ONO, ELAN, IDED), but with Monday-easy clues, they’re quickly gotten past. That ST BEDE / MT IDA crossing at the D might have snared some solvers this early in the week, though.

Clue of note: 49d. [Contacted by phone, in a way]. TEXTED. Because, why call when you can text?

An enjoyable theme making for a pleasant debut. 3.5 stars.

Barbara Lin’s Universal crossword, “But Is It Music?” — pannonica’s write-up 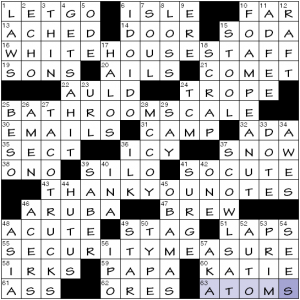 Elements of musical notation—or just of music, I suppose—as parts of phrases, in unrelated senses.

Solid. Was it music to your ears?

Haven’t got much else to say this morning.

Can’t say I was familiar with the constructor of today’s LAT, but now I want to be: This puzzle was light and breezy and everything a Monday should be. 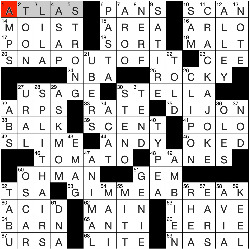 Let’s start with the revealer at 53A [Kit Kat bar slogan … and hint to the starts of answers to starred clues], which is GIMME A BREAK. Each of the three themers, which are spread around the grid pinwheel-fashion, starts with a synonym for BREAK:

Really, what’s to say except “nice”? Take a look at how short those theme clues are — that’s an indicator of how in-the-language the theme phrases themselves are, that one doesn’t need to do backflips to clue them. Super-smooth grid that got me done in well under 2 minutes, with very few proper nouns to trip a Monday solver up.

Also, I recognize that I am being baited here. MALT clued with reference to whisky, STELLA at 30A (though I will admit I dislike the beer because it means I hear my name at bars a lot), and the partial A CAT clued with reference to Robert Heinlein. (I read William Patterson’s two-volume biography of Heinlein last year and therefore got to know quite a bit about Heinlein’s love for cats.) One hiccup: I wish RHEA had been clued either as the bird, or with a little more information so that those of us who don’t know the actress can walk away from the puzzle having learned something. [“Better Call Saul” star Seehorn] would’ve been enough. 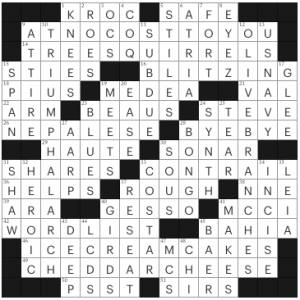 Easier than I expected for a Monday. Could just keep entering answers without slowing, for the most part.

Interesting grid, with six 13s framing it up.

21a. [Dance pro Chmerkovskiy of “Dancing with the Stars”], VAL. Val and his brother Maksim were born in Odesa, Ukraine, during the Soviet “Odessa, USSR” years. You may have seen them recently on lists of celebrities with Ukraine ties.

Hoping not to see complaints about the 2Pac EYEZ/BLITZING crossing. You know BLITSING isn’t a thing, and you ought to recognize 2Pac/Tupac Shakur’s name and remember that playing with spelling is a common thing in hip-hop.

3.75 stars from me. Ended up liking it more than I thought I would after the early ROES OCS COQ lineup felt clunky and heightened my Spidey sense for iffy short fill. 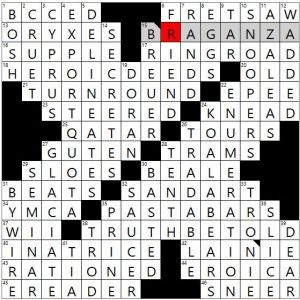 I enjoyed the heck out of 98.9% of this puzzle (I did the math) — it’s chewy in both clues and entries, some of the requisite BEQ cluing angles didn’t make me roll my eyes too much, and I just plain enjoyed my journey around the grid – NW to SW, jump back to the NE, then work down. But two crossings are just brutal, leading to a DNF, and I am generally pretty reasonable with difficult crossings.

Let’s get into it:

If you’ll indulge me, I’m struggling to nail down why I find these more objectionable than difficult crossings I’ve found in the past. I *certainly* don’t mind learning about these — and will go to a Wikipedia dive once I post this — but they don’t ring the same “oh, that’s really a weak area for me” or “oh, I rarely see something from that area in crosswords” bell that happens with opera, fashion, reality television, etc. But rather than opera or fashion or reality tv, we’ve got European history and European art (x2), and we’ve got them crossing.

Digging a bit into those Wikipedia pages, BREUER was a Bauhaus artist; LAINIE Kazan was in My Big Fat Greek Wedding (I’ll concede this is weakest of my objections); St. Elsewhere; BRAGANZA is cognate to Bragança on modern maps; and TRONIE is exemplified in some famous paintings I have definitely seen. So I’m glad to learn about them and fit them into what I already know — if they weren’t crossing I’d probably treat all four as “hey, cool stuff I learned today,” but those are some tough crossings. (Side note [that maybe isn’t that -side]: Bauhaus and St. Elsewhere show up *all* the time in trivia and trivia-adjacent stuff I do. It’s really noticeable.)

Notes, which may or may not be brief. We’ll see: 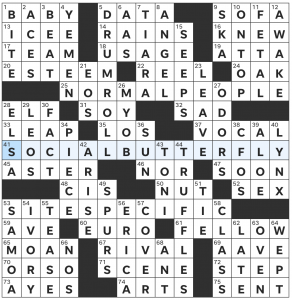 Looks like this is a debut! Congrats Zaneb, I loved this puzzle. (And please correct me if I’m wrong!)

Theme: The first word of each puzzle can have the prefix “para.” I’m not sure what the title refers to… It may be a band (I got a few music results). Any ideas, commenters?

This puzzle was super fun. Love the lighting bolts in the middle, the center entry was so good, and the two longer down answers, TRUFFLES and DRUMROLL were delightful, which is my ideal puzzle adjective. Let’s go through some of the clues: