Title: “Pent-Up Aggression”
Prompt: The meta for this puzzle is a musical act.
Answer: Five for Fighting 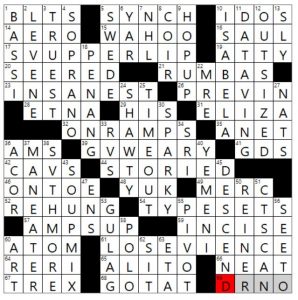 Ack! forgot the Muller Meta was already out this month and only realized in the final hour. Luckily the meta fell fast for me. We had five squares in the grid that were a V one way, and a rebus word synonymous with “fight” going the other way:

17-A: [What you might keep if you keep cool] = S[TIFF] UPPER LIP, crossing LEVENE at the V
11-D: [Automated extraction of online info] = DATA [????-ING] on the down, crossing PREVIN at the V. Is “Min” a slang word for fight that I don’t know? Or is it not DATA MINING there? The other four work out so this has to be right, but someone hip me to this one in comments.
39-A: [Tires] = G(ROW) WEARY, crossing RVS at the V
38-D: [Prestigious college outside Philadelphia] = S(WAR)THMORE, crossing CAVS at the V
61-A: [Gets frustrated] = LOSE(S PAT)IENCE, crossing PIVOT at the V

So that’s TIFF, MIN or something else, ROW, WAR, and SPAT, which are all conflict-related, crossing the roman numeral V (5), and there are five of them to boot, so gotta be FIVE FOR FIGHTING, a one-man band named after a hockey penalty.

3 for 3 in ’22! You too? This one played a little tougher than the first two of the year, with just 342 right answers just before closing time.