Well, if ever there was a puzzle theme suited for the WSJ, this might be the one.

Theme answers (in the Down direction, hence the title) are familiar phrases that hide types of monetary investment funds. 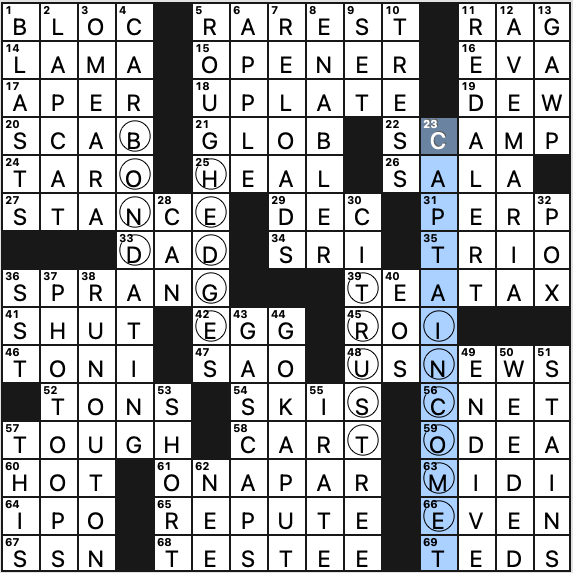 I’ve never heard the phrase “Sinking Fund” which OED defines as, “A fund formed by periodically setting aside money for the gradual repayment of a debt or replacement of a wasting asset.”

Maybe that’s why I can’t say I personally got a lot of enjoyment from the theme. However, it seems as solid as any other hidden-word theme. Maybe I would’ve liked it better if all the words were commonly paired with “fund.” “Hedge fund” and “trust fund” seem common enough, but “bond fund” and “income fund”—though actual things—aren’t phrases the average person hears bandied about too often. Alternatives might have included “slush fund,” “mutual fund,” or “index fund,” but for all I know, no reasonably good potential theme phrases hide those words.

Those corners are huge, though, eh? While they’re mostly nice, there’s a noticeable amount of crosswordese here like APER, SALA, ODEA, TESTEE, and SST. That EOS/ROI crossing is also a little rough given their clues [Daughter of Hyperion] and [Père du dauphin].

Lest you think I didn’t like anything about this puzzle, there are some definite highlights here like the NE corner’s RED ALERT and AVE MARIA stack as well as GAS CAPS, GO KAPUT, and PHOTO OPS. 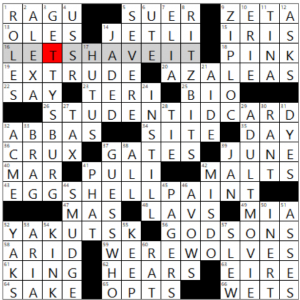 The theme works by inserting an apostrophe into a word in a familiar(ish) phrase to make it a contraction, with the resulting phrase clued accordingly:

I’ll guess that Peter looked long and hard for more possibilities that would have worked as sentences and didn’t find any that fit the right letter counts. I just didn’t care for the middle two as part of this theme. Can anyone summon up a rousing defense of the theme’s cleverness that outweighs my disappointment?

Call me JADED, but I gotta say, SUER just is not a word people use. Plaintiff! Plaintiff is the word. Now, one could argue that it’s bizarre to use that quaint English word when all you need is a way to convey “the person who is suing the other party,” but we aren’t in a place where SUER is poised to take over. 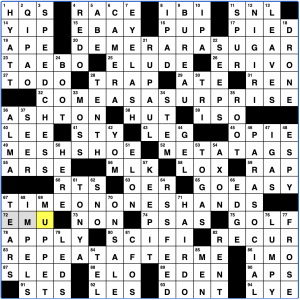 We’ve got a 17×17 collab from Matt Gritzmacher and Brooke Husic from the AVCX today, and it’s Matt’s debut as a constructor!  Congrats, Matt!

Given the larger size of this grid, I like how this played like a themeless (for me, at least) where I could see the theme after taking a step back to look over the grid:

The “feature” each of these answers has is a pair of repeated letters appearing directly after the bigram ME.  It’s a more subtle theme, but again, I liked that this felt like I was solving a themeless, and I could connect what everything had in common after the fact. 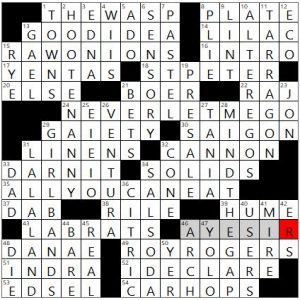 Pretty standard TNY Wednesday for me today difficulty wise, but I had a real fun time moving around the grid, with long and medium down entries seamlessly feeding into an interrupted middle stairstack.

I quite liked several of the long entries; HOOTENANNY, MIND THE GAP, ALL YOU CAN EAT, NEVER LET ME GO. I’ve only known NEVER LET ME GO from cultural osmosis until now, and reviewing the plot, dystopias are not for me. Alas.

But anyway, the real joy for me in this puzzle were the midlength entries and clues. I love clues like those for RAW ONIONS [15a Whopper toppers] and LA LA LAND [31d Best Picture nominee mistakenly announced as the winner at the 2017 Oscars] that bring up a memory rather than a mental cycle through synonyms. Other clues I liked: [“Well!”] for I DECLARE at 52A and “We Didn’t Start the Fire” lyrics for EDSEL at 53A. 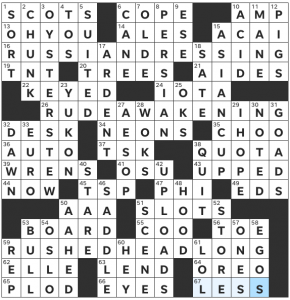 When I do a puzzle like today’s that’s such a classic USA Today theme type, there are a couple things I look for that can take a puzzle from average to great: namely, how cleverly the theme relates to the title and if the theme answers themselves are memorable (given that USA Today doesn’t require symmetry, there’s no excuse for boring theme answers, imo). Today, the title told me exactly what to expect (although I was kind of hoping for some type of ladder to exist in the puzzle just to switch it up), mostly because because the phrasing felt a little forced and “The Broken Rung” isn’t a common saying. In terms of the theme answers, RUDE AWAKENING was the standout by far. I always thought Reubens used thousand island and not RUSSIAN DRESSING, but a quick post-solve google tells me either are valid (Thousand island is basically Russian with pickles, who knew?). RUSHED HEADLONG is fine but felt a little partial-y to me – I really wanted the word “into” on the end. Thus,  this puzzle didn’t quite get to the top echelon for me, but was enjoyable nonetheless. 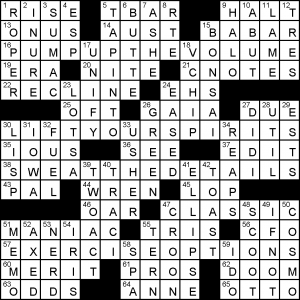 I think that knowing Stella is, to put it mildly, a fitness fanatic – elevates this puzzle’s theme. Even without that knowledge though, it’s a very creative theme with four spanning theme answers tied to both working out and another, arbitrary, profession. We have [Work out like a hairdresser?], PUMPUPTHEVOLUME; [Work out like a bartender?], LIFTYOURSPIRITS; [Work out like a fine artist?], SWEATTHEDETAILS; [Work out like a stockbroker?], EXERCISEOPTIONS.

The puzzle played very hard for me for a Wednesday, both because of the large amounts of theme acreage that were not clued straightforwardly, as well several other clues and entries: