Theme: COMPRESSED FILES (38a, [Contents of some archives, found four times in this puzzle]). The other theme answers are familiar phrases that hide common computer file types squeezed into one square in rare (for the WSJ) rebus style. 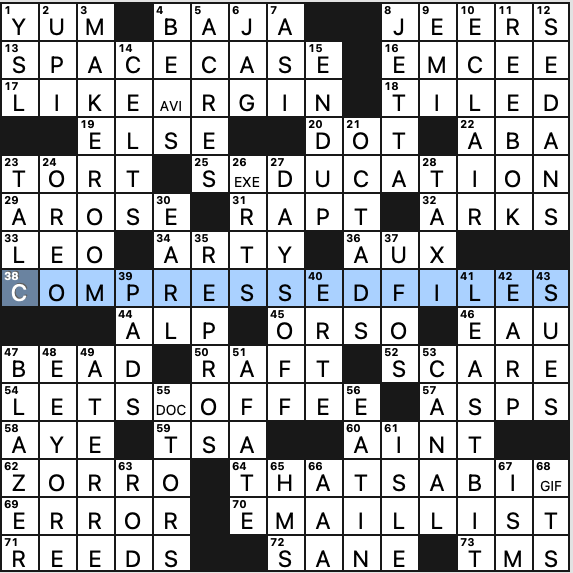 All these were nice, to be honest, and the revealer makes a solid basis for the rebus. A rebus in the WSJ is so rare that it’s completely unexpected, so it was a fun aha moment when I figured it out.

MAKE ROOM, LEAST BIT, and DAYS OFF are our marquee fill entries. Not super sparkly, but solid enough. We have some additional long entries in the Across direction: EMAIL LIST (also solid) and SPACE CASE (wonderful). ERTE and A FATE fall into the crosswordese category. 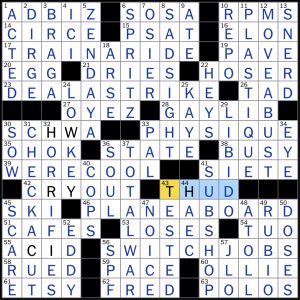 I see what John Westwig is aiming for with the theme of today’s puzzle, but the clues themselves feel just a bit too complex for their own good:

Each of these is a phrase that’s had its component pieces flip-flopped – RIDE A TRAIN, STRIKE A DEAL, BOARD A PLANE, BUST A MOVE, CUT A CHECK.  Those phrases are (kind of) clued by the “Experience needed” section of each clue, while the “is wanted to” part hints at the flipped meaning.  It felt weirdly both underclued AND overclued, at the same time.  This also had some weird choices of fill – AD BIZ? “In HAEC verba”?  This one was not my cup of tea.

The theme answers are….sort of like cryptics? With a twist? I am dipping my toe in the cryptic waters so I am no expert, and I had to look at Peter’s answer sheet to even begin to understand what was going on. Peter doesn’t always explain the theme. To my relief, he did this time. He said “…all the clues with question marks need to be interpreted as a single letter, followed by the rest. So “Clay?” is really “C” and “lay” leading to the answer DOWAGER (the note DO and WAGER).” That’s part of it. The rest I figured out of my own with a little help from the title. The first letters of the clues are notes on the C major scale and each theme answer begins with the corresponding note in solfege. You know solfege even if you don’t realize it.

Peter explained 1a, DO WAGER. 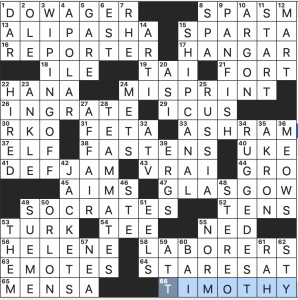 And that brings us back to…..well, you know.

Phew. And likewise wow. A tricky layered theme that works – every one is solid. And a whole lot of theme material that doesn’t really compromise the fill. The only thing I stumbled on was RUGGEDEST and this is such a brilliant theme I’ll let it go.

Gotta run. What I didn’t know before I did this puzzle: that EEL blood is poisonous to humans. 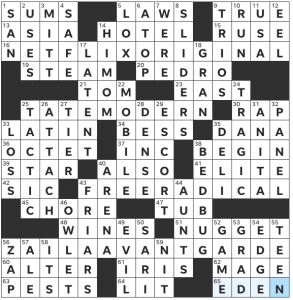 (Was anyone else worried for a second that USA Today was running a “something different” puzzle??)

My favorite thing about today’s crossword was how fresh and new each of the theme answers felt – apt, considering the theme! I’ve heard of a FREE RADICAL, but the specific definition was new to me so it took a while to get that answer. Not new to me, however, is ZAILA AVANT-GARDE, who is probably the most interesting 14 year old on the planet. Aside from being the first African American to win the National Spelling Bee, she also holds three Guinness World Records for her basketball skills! Truly incredible. Her name is also 15 letters long, which is perfect for crosswords.

There were also a bunch of great clues/references in today’s puzzle. To highlight a few:

It’s great to see an easier puzzle that doesn’t get its easiness from using the same clueing angles that we see time and again in every single puzzle (Monday NYT take note!). “Something New” indeed, and I really enjoyed it.

Brendan Emmett Quigley’s Crossword #1451, “I As In Île-de-France”—Darby’s review

Theme: Each of theme answers begins with JE, which translates from French to “I.” When the JE is removed, an item is left. 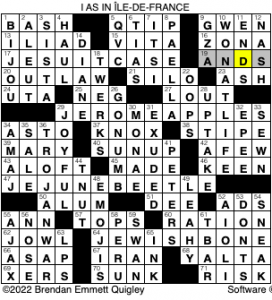 This was definitely a slow burn for me, given that I have zero French skills and thought that the title “I As In Île-De-France” was alluding to pronunciation. However, I was excited to see JESUIT CASE, given that I’ve attended Jesuit schools since I was in high school (a strange fun fact about me). I was thrown off for awhile with JEWISH BONE because I thought the shank would be more specific. However, once I cracked the JE-code, it fell right into place.

I was also a tad preoccupied with the 13a [“Poem about the 36-Down”], 36d [“See 13-Across”] and 55d [“36-Down hero”] trifecta of ILIAD, TROJAN WAR, and AJAX respectively (for my Greek epic nerds out there, the question remains: which AJAX?). It felt a bit like a left-side bonus theme as I filled it in and was a great use of two of the many Js in this puzzle. More generally, I really liked this grid. The northwestern and southeastern corners felt a bit sectioned off, but both WON AT LIFE and TROJAN WAR made a huge difference in helping to fill them in. The inner diagonals were plenty open and spilled well into the rest of the grid as I finished my solve.

That’s all from me today! I’ll be back tomorrow with the USA Today. 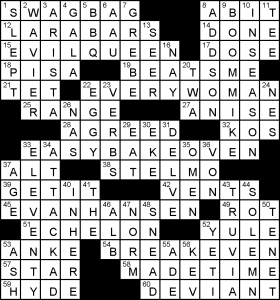 Today’s theme by Joe Deeney features a fairly standard LA Times theme trope with final revealer: [Neither lose nor gain…], BREAKEVEN means EVEN bookends four other answers. It felt to me like some effort was made to find more interesting, less obvious, theme answers?

Difficult areas for me, a lot of which seemed to be brand names:

THEME: Things that can be picked. 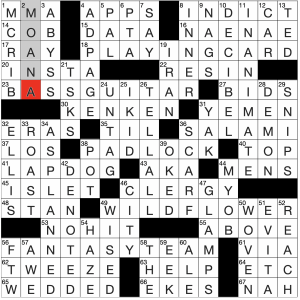 Glad to see that anything NOSE related was left off the list.

Cut and dry, but solid theme today. I like that all of the themers are “picked” in different ways. I don’t often see BASS GUITAR players using a pick, but I know that’s an option of course. I bet Primus went through a few picks in his day.

Fun clues for KEN–KEN and NAE NAE. Almost thought there was a little side theme happening.