Theme: Each theme answer is a famous TV neighbor. 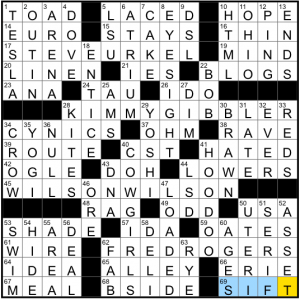 Congrats to Stephen on his debut! And if you’re wondering if you’ve been hearing those words a lot from me recently, it’s true – this is the 5th NYT Monday in a row that’s been a debut for at least one of the constructors! Love seeing new faces around Crossworld.

How you feel about this puzzle’s theme is probably going to depend on how much 90’s TV knowledge you have. I was born after the heyday of most of these shows, so to give you an idea of how much staying power each one has, STEVE URKEL and KIMMY GIBBLER were both instant gets for me, as was FRED ROGERS (although I did try to put in “Mr. Rogers” first before realizing it was too short). I have never heard of WILSON WILSON.

I’ve mentioned it before, but if you’re a constructor building an easy puzzle for a wide audience like the NYT has and your theme is based around pop culture knowledge, it’s good to include answers that span a wide array of times/knowledge bases in order to be solvable by more folks. Here, FRED ROGERS actually stands out as the only answer not to be based in the 90’s (or really a TV “neighbor” in the same way as the others, but he is famous as a neighbor and anyways I’m never going to complain about more Mr. Rogers.)

Wife-and-husband duo Jill Denny and Jeff Chen GO WHOLE HOG (62a, [Pull out all the stops, and how to find the animals at the starts of 17-, 27- and 47-Across]) in this grid. The other themers are familiar phrases whose first word can precede “hog.” 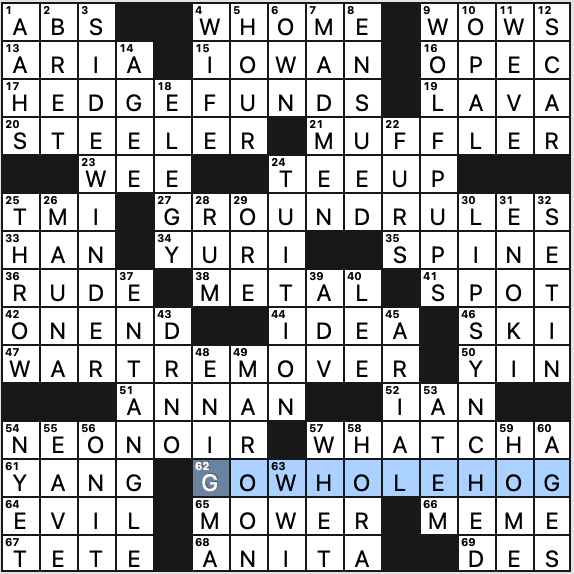 Cute, huh? I didn’t catch on until I got to the revealer which made for a nice little twist rather than the usual these-words-can-precede-this-word variety.

Having only four theme answers frees up the grid for fun fill like SIDEWINDER, WOLF PUPS, LIP SYNCHED, ENTANGLE, and TUITION. Also good: MUFFLER and NEO-NOIR. 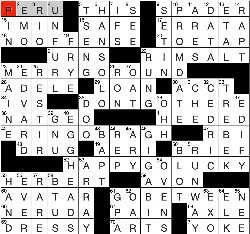 Today’s puzzle felt like a mismatch between grid difficulty and day of the week, although my final time of 2:10 doesn’t necessarily bear that out, especially since this grid is a 16×15. Let’s see where we get after we’ve talked this out…

First, the theme, which is pretty simple and is probably why this puzzle got slotted for Monday even though I might have chosen Tuesday or even Wednesday if I were in the editor’s chair. The revealer at 61A [Intermediary … or a hint to 23-, 35-, 42-, and 52-Across] is GO-BETWEEN, and each theme phrase has GO as the central word of a three-word phrase.

So…sure, the theme entries certainly lead one to a Monday slot. They’re all more than well known enough. It’s the fill that, while totally legitimate, feels a little harder than Monday. We have ERRATA, which can nearly always be ERRORS if you haven’t got enough crossings, at 17A, right underneath a proper name. Also in that NE corner, RIM SALT is lively but I suspect might not drop quickly. We have the possibly tough spelling of EDVARD Munch at 24D, crossing what I think is a not-so-easy clue for ADELE [Singer with numbered albums]. 36D OHH could easily be AHA (and probably at least one other thing I’m not thinking of) if you’re trying to use that three to get a toehold. In the NW, FRYE feels like a niche brand, adjacent to Yani TSENG, whose name I didn’t notice while solving since I got her without crossings, but feels tough if you don’t follow golf. In the center right, although any one of CHE, CEDRIC, and TREBEK feels fine for Monday, having three proper names side by side, not so much.

I have argued myself into this puzzle being more appropriate for another day of the week, which of course is on the editor, not the constructor.

Hi and happy Pi day! I’m filling in for Matthew and I do not have pie, worse luck. There is no pie in the puzzle, either.

This fell a bit faster for me than I expected. It helps that I actually knew the film and music references, which rarely happens for me with Brendan’s puzzles. Lots of good stuff! 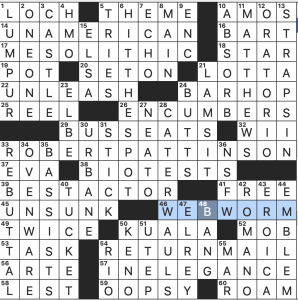 Speaking of Beethoven’s Third, I once listened to an audiobook of short stories in which this symphony was a major plot point. Unfortunately, the narrator consistently pronounced it as the EROTICA. Oy. 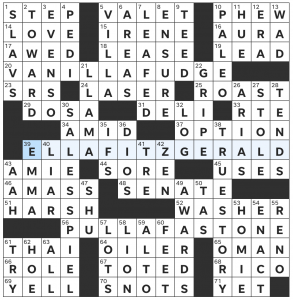 Good morning folks, quick write-up today as things are broken at work and I must fix them. Today’s theme featured answers which contained the word FALL inside of them, backwards. VANILLA FUDGE, ELLA FITZGERALD, and PULL A FAST ONE. All three are lovely entries. Have a good Monday! 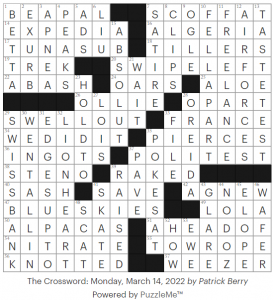 In brief, fave fill: SWIPE LEFT, BLUE SKIES, SWISS BANK, WENT ALL IN. Less keen on: “BE A PAL” (feels overused in grids), SWELL OUT and POKES AT and HOLD TO, POLITEST, OP ART, STENO.

49a LOLA Bunny was created for Space Jam … because the filmmakers felt they needed a female cartoon character to objectify. In 2021’s Space Jam reboot, Lola Bunny is a hotshot basketball player instead of … a rabbit with a pair of boobs and a skinny waist. 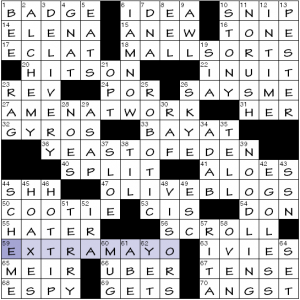 Really need to try to keep my personal animus for the theme subject at bay (33a [Howl toward] BAY AT). I’ve proclaimed on numerous occasions that “mayonnaise is the ichor of the devil”, YET (62d [“That said …”]) such is my task this morning to deal with this.

must stay calm … must not snap … concentrate on mechanics of puzzle …

All the pieces work, and the wackified phrases are suitably entertaining.