Quite the busy crossword weekend for Christina Iverson! In addition to being named the new assistant editor over at the LA Times, she has today’s Sunday NYT puzzle with co-constructor Katie Hale. Let’s spring forward into a puzzle that explores a number of body-related phrases (presented literally) in the grid: 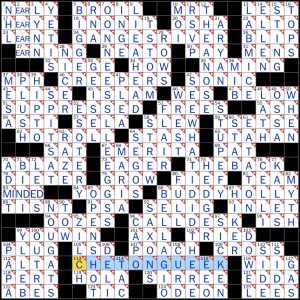 113A: CHETONGUEEK [Insincere, as a remark]
– TONGUE in CHEEK

7D: OONNEESSLLEEGGSS [Walk around at a rest stop, say]
– ??? ONES LEGS (Stretches ONES LEGS? That’s the only thing I can think of that might make sense here.)

This was a mixed bag for me. On the plus side, I liked that the themers weren’t symmetrically placed, so you had to be ready for them wherever they were. On the minus side, I’m still not sure what two of the phrases are meant to be, so that missing *click* feeling makes the puzzle less satisfying for me. (Side note: If you know what the two missing phrases are meant to be, please help me out in the comments section below!) I’m torn on how I feel about the variety of ways that the themers were presented

That’s all for me. I hope the adjustment to darker mornings and later sunsets is one that treats you kindly. Summer is on its way! 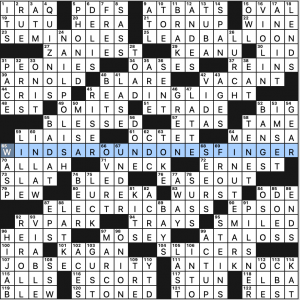 Universal Sunday crossword solution · “The Long and Short of It” · Gary Larson and Doug Peterson · 3.13.22

The first themer I resolved was NAIL POLISH, and that was worth a little chuckle and set me up in good stead for the rest of the entries. I have my own list of heteronyms from when I made a similar puzzle so the rest didn’t surprise me as much, but they’re all solid enough and I appreciate the constraint of limiting entries to the ones with vowel sound changes.

Elsewhere we have SEMINOLES, ANTI-KNOCK additives, QUIZNOS, PILSNER, and EUREKA! Plenty of solid 5s, 6s, and 7s abound as well, and little to no dreck.

Evan is giving up the reigns today. Maybe so he can rest up to compensate for today’s lost hour of sleep? 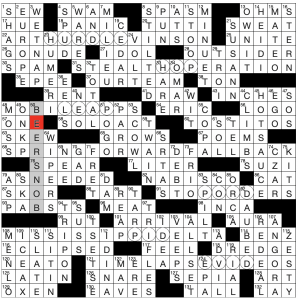 One of the last sentences I spoke before solving this puzzle was my regular complaint about our bizarre clock changing routine. “Any politician running on the platform of doing away with the clock changing nonsense and whose name doesn’t rhyme with ‘Grump’ has my vote!” I’m only half joking.

Still, the puzzle clearly had fun with this concept, and it was a solid puzzle at that. A good entry-level theme that is accessible to everyone. It also has a bit of AHA power to it that would definitely delight newer solvers while simultaneously pleasing constant solvers as well.

Enjoyed the theme phrases: I didn’t know ARTHUR D. LEVINSON‘s name, but glad to learn it. Even if he is likely to be sitting atop a fortune. It’s hard for me to hear MOBILE APPS without a hint of a British accent.  TIME LAPSE VIDEOS feels oddly redundant as a phrase to me, even if it’s not. I just call them TIME LAPSEs, with the VIDEO part being sort of implied. Most TIME LAPSEs I’ve done are typically still shots taken about 15 seconds apart and combined into a VIDEO in post-production.

Very clean fill throughout. BEER SNOB (juxtaposed nicely with PBASTS [Brews that might be turned down by a (BEER SNOB)], GO NUDE, and HOT SAUCE were my faves. Love the HOT SAUCE clue too: [Burn After Eating, e.g., which has 669,000 Scoville units]

New names included SUSANN, and Catherine PARR. Is that it? I’m happy to say Ilhan OMAR is sticking after seeing her a few times now. I do like a little repetition of names just so I don’t forget them easily.

Needed every cross for SEW [Do some basting], which made me nervous as it was in the 1A spot, but the rest of the puzzle fell very easy for me.

Thanks for this one! Nice change of pace to have guest constructors. Really enjoyed this.

Can’t say the same for the time change. 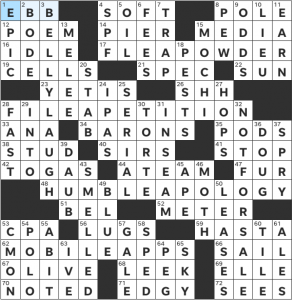 Late review from me (sorry, folks!), but I thought that this was a fun puzzle. I was a bit thrown off by the “Forward” of the puzzle’s title, as it made me feel like the theme should have to do with the latter half of the answer, so, needless to say, it didn’t help me much in my solve. That said, each of the theme answers was solid. I kept trying to put in APP at the beginning of 62a, and so it wasn’t until I hit the Down clues that I realized MOBILE kicked it off. Similarly, I got FILE right away but needed a bit of help with PETITION.

Grid-wise, there were some fun diagonal tracks down through. I also really enjoyed 3d [“Hearty guffaw”] BELLY LAUGH and 32d [“Sign above some display samples”] NOT FOR SALE (we’ve all had that moment at a garage sale, right???).

Short and sweet for me today! Overall, it was fun to see the nod at Daylight Saving Time reflected well in this grid. 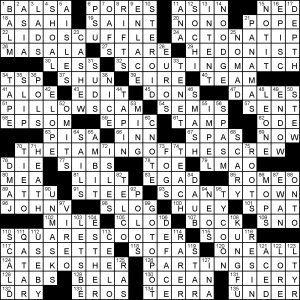 First, exciting changes as, as announced in the top – congratulations to Patti Varol on becoming LAT crossword editor after a long apprenticeship – as well as to Christina Iverson who takes over Patti’s role as assistant editor.

The puzzle conceit today by Mark McClain is a simple one – Words with “Sh” become “Sc” and hilarity, hopefully, ensues. The first entry, LIDOSCUFFLE, is evocative, but may bemuse people who don’t recall the song by Boz Scaggs? More prosaic entries include SCOUTINGMATCH, PILLOWSCAM, SCANTYTOWN, SQUARESCOOTER and appropriately final PARTINGSCOT. The centrepiece, and probably the starting off point of the puzzle, is THETAMINGOFTHESCREW. It is surprising for me anyway to go with the prison guard meaning of SCREW. I thought that was strictly UK?