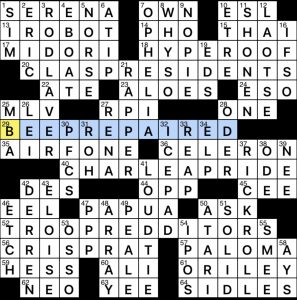 The theme this week is names or phrases in which the second word begins with “PR” reclued so the one word ends in P and the next begins with R.

This theme set is delightfully goofy. CHAR LEAP RIDE is a bit of a stretch, but I especially enjoy BEEP REPAIRED (partly because those low battery alerts are soooo annoying and figuring out which alarm is the culprit is super satisfying) and CRISP RAT for the mental image of a cat sitting at a table, knife and fork in hand, as the chef presents a fried rodent). 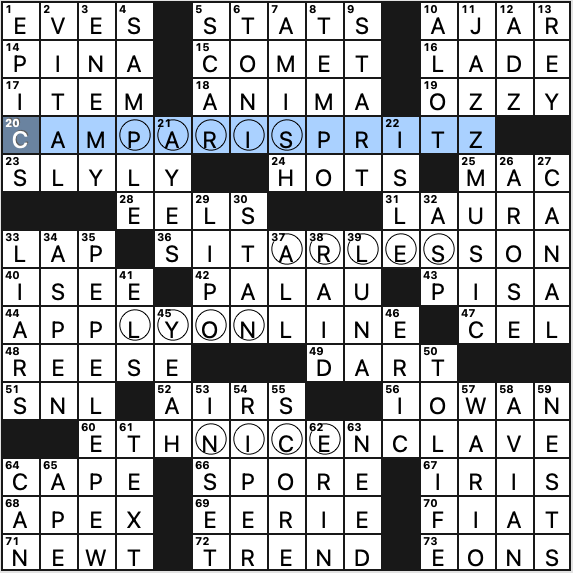 Pleasant enough, yeah? I tend to be more impressed when hidden words are longer, so I favor the top two. But the bottom two are solid as well.

In the fill, PEPÉ LEPEW makes an appearance in the grid, appropriately, though his Frenchness is not referred to in the clue. JAZZ MUSIC, something decidedly not French, is the other marquee long Down entry. I liked seeing Nintendo baddie WARIO in the grid as well. 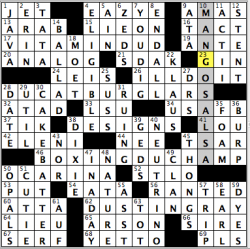 Hello there, everyone! Beware the Ides of March, or something like that.

Today’s puzzle ends up having a bunch of doers, if you will, making lots of things happening in it. The letters “DU” are added to common phrases/proper nouns to create some punny answers.

Though it has been a while since I’ve baked a cake, I can’t tell you how much I love downing some CAKE BATTER, to the point where it would feel weird to bake a cake or muffin and not do so (30D: [Mixture for a tort-to-be)? Some other good down fill came in the form of ELIGIBLE (4D: [Qualified to participate]). Running on fumes now after hopscotching two boroughs on consecutive days to cover some pre March Madness Madness in person, so time to fly the coop and head out. But first…

“Sports will make you smarter” moment of the day: LSU (33A: [Baton Rouge sch.]) – Since I’ll be traveling soon to cover the NCAA Tournament, might as well use this space to talk about the Bayou Bengals tournament history. The LSU men’s team, which will be playing in the NCAA Tournament first round on Friday (vs. Iowa State), became the first No. 11 seed in the 64-team tournament era to make the Final Four when the 1986 team made a Cinderella run all the way to Dallas and the national semifinals. The LSU women’s team, playing in the first round this weekend as a No. 3 seed against Jackson State, had one of the most impressive runs in recent memory, making five consecutive Final Four appearances from 2004 to 2008. (They lost in the national semifinals in each occasion.)

A nice, solid Tuesday offering. The theme is consistent and accessible. The fill is smooth.

I figured out what the theme answers had in common and couldn’t predict the revealer.

What I didn’t know before I did this puzzle: that GALE SAYERS was the youngest inductee into the Pro Football Hall of Fame. I suppose that has something to do with the brevity of his career and the fact that he retired at 28. 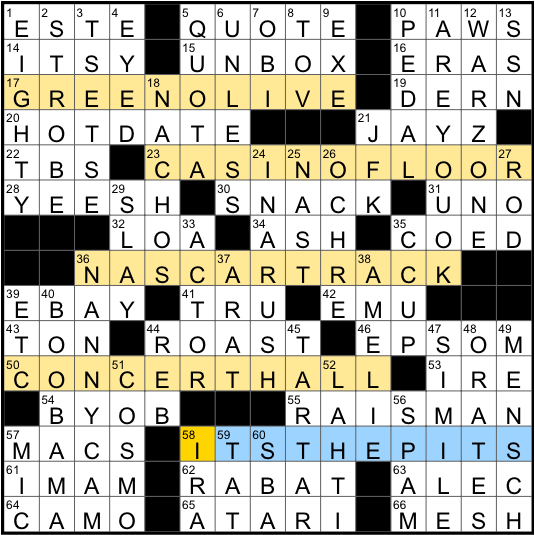 Works for me. Each of the pits is slightly different than the other. I do wish NASCAR TRACK was replaced with a generic RACE TRACK which sounds more like an in-the-language phrase.

“ARE YOU OK?” and NANNYCAM make for lovely, lively anchors in the NE and SW. Can’t go bad with NACHOS and HOT DATE, and it’s nice to see the surname of Aly RAISMAN. Oh, and there’s BO OBAMA, and a grim reminder of the WAR ZONE in Ukraine right now. Pray for peace but help out if you can.

I see some people taking issue with the RABAT/LAHTI crossing, and I’d say that’s a fair comment for a Tuesday. But both of those have been in enough crosswords over the years that all bets are off after Wednesday.

That’s all from me. Happy Ides of March! 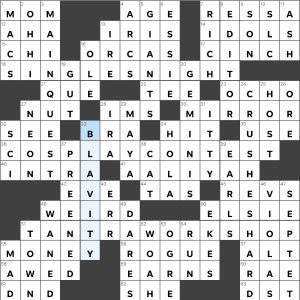 Theme: each themer begins with a trig function

The theme took me back to high school math with sine, cosine, and tangent, all represented with their shortened function names (or the buttons on the handy dandy TI calculators). While the title hints at the theme, it’s not obvious where or how they will appears in the themers so I jumped right in and started solving, so didn’t piece the theme together until the end. SINGLESNIGHT cluing had me first thinking “blind date” or “speed dating”. COSPLAYCONTEST was an easier fill for me and once the first half of the first themer dropped into place then I was set for TANTRAWORKSHOP, though I kept trying to use “tantric” to no avail so crossings helped. From these themers we get: SIN, COS, and TAN.

Lots of great entries and an abundance of 3s and 4s but everything felt fresh and was a fun solve. Plus many of those crossing help with filling in longer entries so this could be a nice starter puzzle for someone. Enough challenge while still being very fair. Nicely done and great collab!

THEME: The letters L and R are switched in common phrases, and wackiness results. 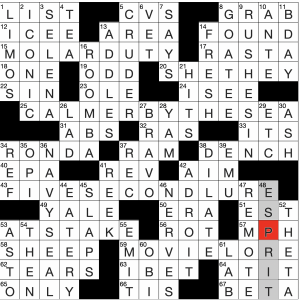 Cool theme! I like themes that don’t immediately reveal themselves and need some sussing out. I didn’t know what was going on here until I got to FIVE SECOND LURE and I was able to identify the base phrase (Five Second Rule) easily. Then the “aha” of the L and R being switched and a *click* with the title. Well done! Which is to be expected from Paul, of course (did anyone peep that mind-bender of a Fireball puzzle he had recently?)

My favorite entry was the one I already mentioned (FIVE SECOND LURE). MOVIE LORE seems a bit bland, but only by comparison to the others.

Fill was just fine. Seemed harder than normal in the NW of the puzzle, for me anyway. Didn’t know SELENA and I thought the “cars with bars” clue was going for some sort of train.