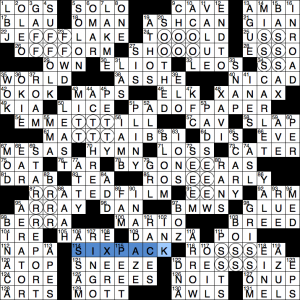 hello and welcome to episode #719 of matt gaffney’s weekly crossword contest, “Something’s Brewing”. this was a week 2, but since the email said it was aimed at more of a week 1 difficulty, i solved it without the instructions, and it was readily solvable as such. what are the theme answers? there’s only one overt themer in the grid: {Convenient beer purchase; you’ll need several of them today} SIX-PACK. and indeed, there are seven SIX-PACKS in the grid, consisting of 2×3 blocks of the same letter six times. those letters, read off in grid order, spell out FOSTER’S, a beer brand and the answer to the meta.

so that’s a very constrained theme, both in terms of sheer amount of material and the requirement that they be in those 2×3 stacks. hence the 21×21 grid size this week. overall, the puzzle was definitely easy enough for a week 1 and pleasant enough to solve, but after the initial aha, there was just a whole lot of crossword left and not much in the way of surprise theme-wise. it’s a nice touch that matt got SIX-PACK in there, although the puzzle would not have been much harder without it—those triple-letter combos are pretty eye-catching. but its inclusion tied the whole beer theme together neatly.

a couple of things that caught my eye from the fill: