Theme: Each theme answer contains the name of a famous singer, backwards. 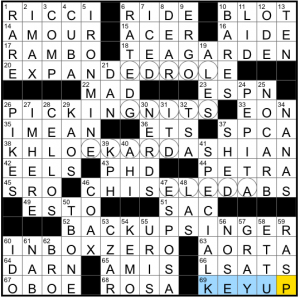 I liked this theme a lot! It was a nice touch that each backwards singer is a single-named person, which helped the theme feel consistent. What helped this puzzle rise above other hidden word puzzles, in my opinion, was that the answers themselves, regardless of the hidden content, were interesting words that I was happy to see. CHISELED ABS and EXPANDED ROLE were standouts, in my opinion. I also kept trying to put in “nitpicking” rather than PICKING NITS. (I did notice after a quick google that a very similar theme to this one was done by BEQ in 2017. But I bet the vast majority of folks won’t remember that… and honestly, BEQ has done like 50% of all themes ever, so.) I did not love the clue on the revealer – backup singers are an important part of the band and I feel like the clue minimizes that! I thought it was going to involve, like, roadies.

We have a pleasant, musical debut this morning, so put on your walking shoes and step lively. 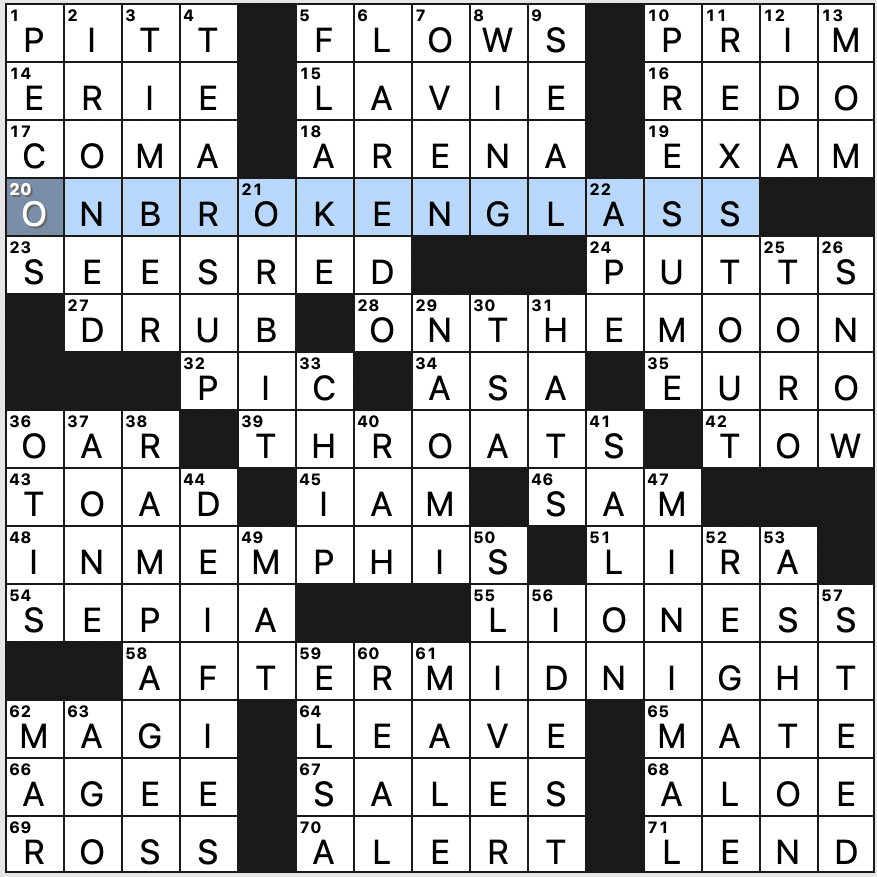 I was going to say that most solvers will probably know at least one of these songs, but looking at the dates I see that three of them fall squarely into my demographic (’80s teens), and the other one fits my parents’ demographic. Nothing for the youngsters. Songfacts.com lists a “Walking in the Wind” by One Direction, “Walking on Air” by Katy Perry, and “Walking the Wire” by Imagine Dragons, but I don’t know how popular those became. The admittedly overplayed but still catchy ’80s hit “Walking on Sunshine” by Katrina and the Waves is noticeably absent. Good title for the puzzle, though.

Fill is solidly clean with Nero Wolfe creator REX STOUT and RAMPAGES in the marquee positions and very little in the way of gluey bits.

Enjoyable puzzle if you know the music. 3.5 stars. 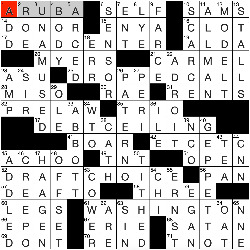 There are plenty of phrases that fit the D__ C__ pattern, so I would’ve tried harder to avoid DRAFT CHOICE (and how fun would this set have been with, say, DESTINY’S CHILD or DISNEY CHANNEL or DIGITAL CAMERAS or DOUBLE CREAM?).

I am also distinctly UNAMUSED by the inclusion of 26D, Joe PATERNO. You know why. 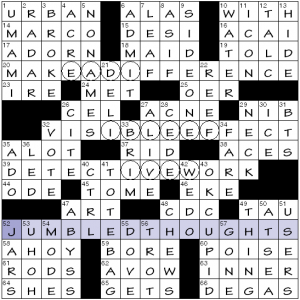 A common theme type, done quite well. An excellent Monday offering. Was an extremely fast and smooth solve for me.

All right, I’ve gone through all the clues and am not finding anything particularly salient to discuss. But don’t take that as indictment; rather it speaks to how well-crafted this early-week puzzle is. I’m going to go ahead and call it vanilla, in the truer sense, not the one that dismisses something as blandly boring. Vanilla, as should be more widely recognized, is a marvelous flavor and is exotically derived from subtropical orchids. Merriam-Webster frames it thus: “Vanilla’s unfortunate reputation arose due to its being regarded as the ‘basic’ flavor among ice-cream selections, particularly as more complex flavors emerged on the market. (Its somewhat beigey color probably didn’t help.) From there, people began using the adjective to describe anything plain, ordinary, or conventional.” 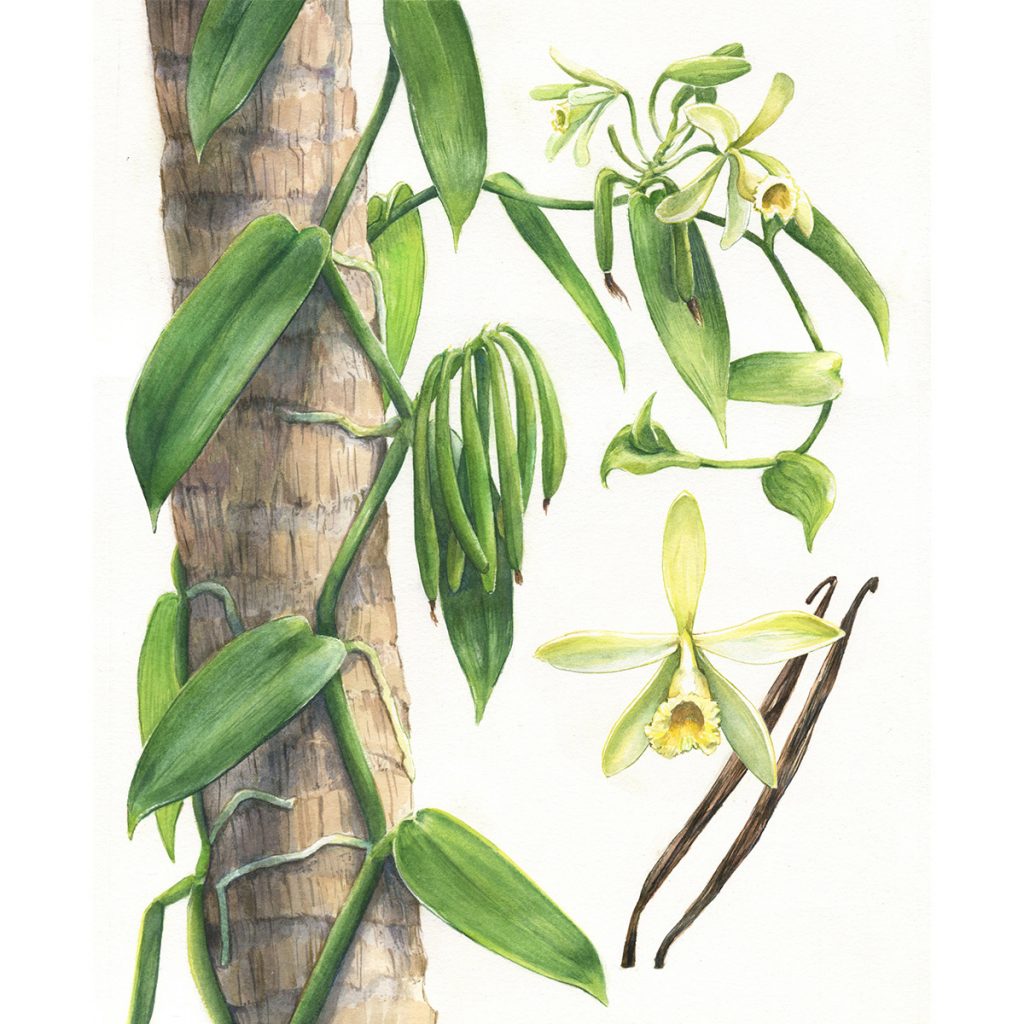 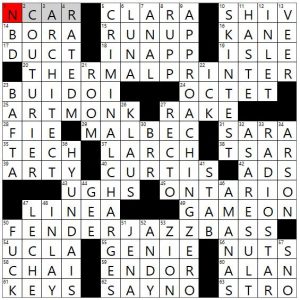 A little over halfway through I feared BEQ had gotten me this week – enough names in constrained corners and some answers I just couldn’t see. But I managed to bring it without too much stewing, and while this puzzle wasn’t for me, I hope you had a good time.

I quite like the long down answers here in CRIMINAL CHARGES and APPROACHING ZERO. [Bad raps] is used in enough situations nowadays that it took me a minute before recognizing there wasn’t really a trick at play. I wasn’t as taken by the longer acrosses THERMAL PRINTER and FENDER JAZZ BASS, though I don’t think either are bad, just didn’t tickle me.

That lattice of long stuff results in a bunch of mid-range answers, though the parallel clues at 2D [One who works for a fashion] COUTURIER and 3D [One always making plans] ARCHITECT were an elegant touch. COUTURIER (and UCLA) also could have been clued in sports directions, but ART MONK, RUPP, and STRO had that area covered, so it’s nice to see balance there.

Good morning everyone! Happy Debut Day to Kaitlin! (I think– correct me if I’ve missed something.)

Theme: All the theme entries have OWO (a surprised-face) inside of them, as indicated by the clue / entry for 69-across. This is the first USA Today puzzle I’ve seen with a revealer. Do you remember any others?

These theme answers were awesome, with the first being my favorite. It’s a nice touch that none of the smaller words (like OR or OF) are repeated. Also, I am always impressed when USA Today puzzles have four symmetrical theme answers, because that makes filling the grid so much harder, and it’s not a requirement. 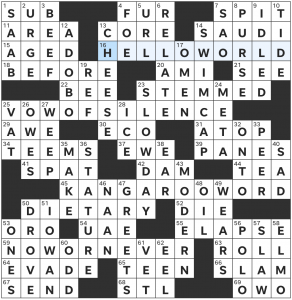 The flip-side is that this puzzle is heavy on blocks (50) and three letter words (27). I think a typical Monday NYT puzzle would have 38, and around 18. I think these things matter in terms of solve experience, rather than stats. So, if a puzzle has a bunch of three letter words all in a row, and many of them are abbreviations, that can be kind of annoying as a solver. But this puzzle didn’t, so it didn’t impact my solve experience at all. 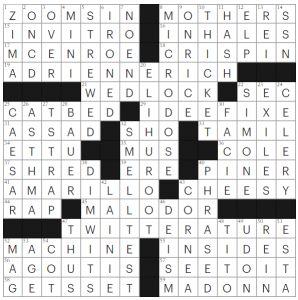 Fave fill: ZOOMS IN, ADRIENNE RICH, WEDLOCK (solely because a friend is getting remarried next month and I’m looking forward to the livestream), SMELL TEST, MICRODOSE, THICKET.

Also DNK: I know there are dog beds, but cat beds? Not sure I was aware those were a thing.

Meh: PINER. Are you a piner? I’m a piner. The whole family’s piners. (Bonus points if you know what I’m riffing on.)