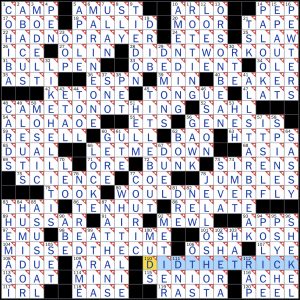 This week’s Sunday NYT puzzle is relatable content to anyone who’s had to kiss a lot of frogs before they find their royalty. But there’s a happy ending as a reward for solving the puzzle – let’s check it out!

This might be the most matter-of-factly queer puzzle I’ve seen in ages, and I’m here for it! I know nothing about the constructor, but the fact that a male constructor is doing this schtick about a number of past failed “he”s did not go unnoticed by me, especially since he could (and the editing team!) could have easily had written every clue with respect to “she”s. None of the themers or their clues required the “Exes & Nos” to be of any particular gender. I know that some folks who worry about crosswords getting “too woke” are convinced that people like me won’t be happy until crosswords are quite literally the most flamboyant queer people of color, but this puzzle’s straightforward queerness is something I appreciate tremendously. It’ll stick with me for a while. I’m so grateful to the NYT team for publishing this puzzle. Bravo!

That’s all from me for now. What did you like about the puzzle? Let us know in the comments section!

This puzzle is all about that bass.

THEME: Common phrases placed vertically in the puzzle with a one-word song title as the last word in each phrase. 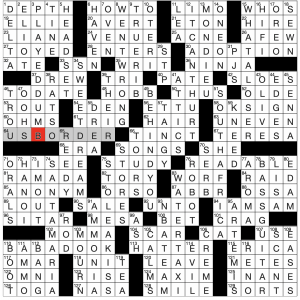 I really suck with song titles. And artists for that matter. Lyrics too. I just sort of hum along and join in when the chorus to YMCA comes back around. So there’s a lot of song titles I didn’t know here. I just assumed PLAYED DUMB, WENT WRONG, and SWEET DREAMS were the entire song titles. Then I got to IT CAN’T HURT and said to myself “Wait a second… pretty sure the title is just… ‘Hurt'” Bingo! As a side note, I do appreciate that that particular song title is ascribed to Johnny Cash and not the Nine Inch Nails. If I recall correctly, Trent Reznor said something along the lines of that song no longer belonging to him and the band once Johnny Cash’s cover version exploded in popularity. There. If I’m right, I just negated some of what I said in the first two sentences of this post. But that’s the extent of my rock band knowledge. I swear. That and Van Halen had a rider in their contract demanding a bowl of M&M’s in their dressing room with the brown ones removed.

Ok, I also knew LOSER, AFRICA, and TAXI, but that’s it. The entries where I had an inkling of what title might be at the bottom lent itself to a nice synergy with the rest of the clue.

Anyway, it’s a pretty excellent theme, and although I am well-versed in Birnholzian style, I didn’t see the added layer coming this time, where the (aptly utilized) bottom letter of each themer spelled BASS GUITAR. Since the central entry SONGS seemed to be a revealer of sorts, and it didn’t mention anything about stringing letters together, I never saw BASS GUITAR coming. Nice.

The theme and the construction is just so damn tight. To be expected, but never unimpressive.

Not too many new names for me… Robin HOBB, Is that it? Just one? That might be a new record.

As always, thanks for this one, Evan!

Very little time to post today, so my apologies for the brief write-up.

Our theme is familiar phrases whose second words can all be synonyms for “a piece of writing.” Consistently, each first word also changes meaning. 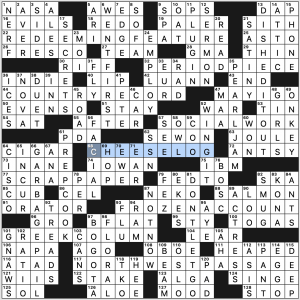 That works. Maybe I didn’t exactly laugh out loud at any of these, but it kept my interest throughout. I’m impressed at the amount of theme material on display.

And yet the fill is nicely smooth. I enjoyed the long non-theme fill like PEARL JAM, DISHED IT OUT, GARBAGE PAIL, and PREP COOK. 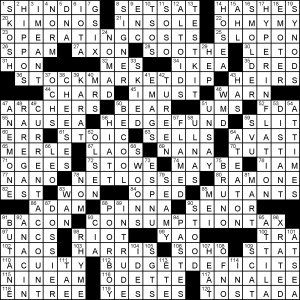 In Ed Sessa’s theme today, a series of broadly financial phrase are reimagined to be referring to a specific profession, that “freaks out” about it:

Theme: Each theme answer is composed of two words. The first begins with HE- and the second with -RE, spelling out HERE at the start. 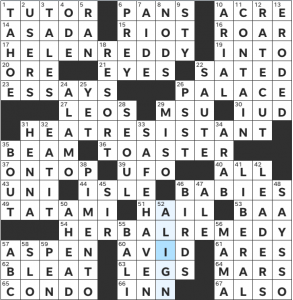 This theme was definitely helpful in my solve. I first got HELEN REDDY on the crosses after mistakenly filling in NINA SIMONE. From there, I had a good sense of what I needed in each following themer.

This was a speedy puzzle for the most part. The top fell into place with almost no delay, but I got tricked up in the lower middle and right sections. I first had KEEN for 60a [“Enthusiastic”] instead of AVID and MARS for 61a [“Enemy of Wonder Woman”], remembering the Roman name for ARES, which, of course, turned out to be the answer to 64a [“Where the Zhurong rover landed”] right below. Eventually, I filled in BALI for 55d [“Indonesian island where ogoh-ogoh are built”] (you can learn more about the ogoh-ogoh statues here). I also felt a bit like 63a [“Parts of piano benches”] was perhaps a bit too general for LEGS, but it was generally fair.