I misconstrued one of the circled theme answers and then couldn’t make heads or tails of the rest of them until I got to the revealer. It’s a cute Tuesday-appropriate theme and I enjoyed it.

There are four squares of circled letters in the grid. I read the first one clockwise and got FEET. Nope. They’re read as rows – L to R, L to R. 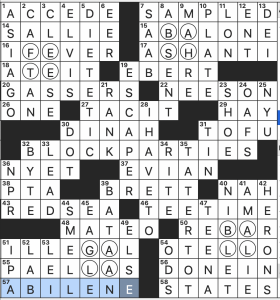 The revealer runs across the middle: 32a [Neighborhood social events…and what the four sets of circles are?] is BLOCK PARTIES. Fun!

Theme: Familiar two-word phrases with the initial letters of R AND D (65a, [Company’s creative dept., and a hint to the five long Across answers]). 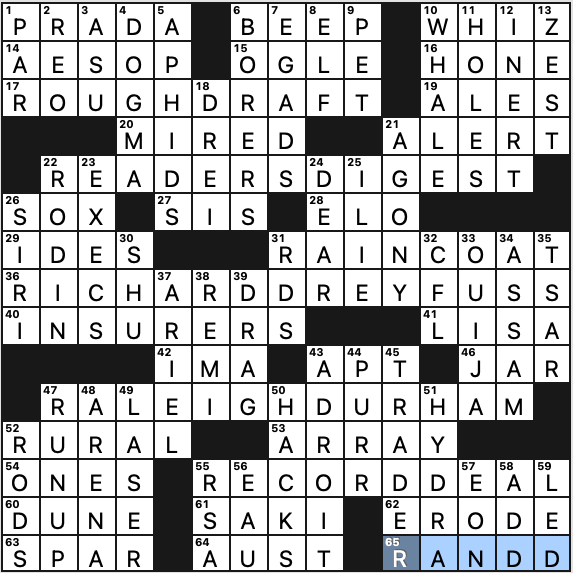 It didn’t take too long to spot the theme, but it was nice to have it confirmed by the revealer. I can’t say I got a lot out of it, but it’s a solid theme good for newer solvers. My only nits would be that as such, it’s probably a better fit on a Monday, and also, there are no shortage of R.D. phrases, so I wonder if another constraint could’ve been added to tighten it up. Here’s another R AND D puzzle from 2013.

Not a lot of Razzle Dazzle in the grid aside from RAINCOAT and INSURERS, but like the theme, it gets the job done. I’m not sure how much longer we can keep using ILIE Nastase in a grid and expect solvers to know him. REMI [Notes after do] was also a bit clunky. 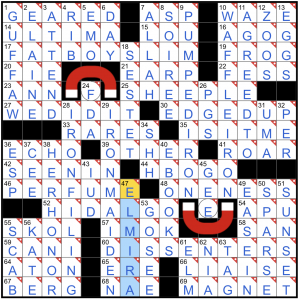 I solved this one via a scraped .puz file, but the NYT’s HTML version includes the horseshoe magnet artwork to complete the theme so here’s that answer grid. The theme revealer is 69a. MAGNET, [Object represented visually twice in this puzzle]. The (rather long) arms of the magnets consist of IRON FILING / IRON MAIDEN and PUMPED IRON / WAFFLE IRON, with the IRON portions adjacent the magnet art. Inside the curve of the magnets are two unchecked letters, F and E—spelling out iron’s chemical symbol, Fe. Cute. Science! When I was a kid, we had a big horseshoe magnet that I was wild about.

Tough for Tuesday: ULTIMA, Spanish HIDALGO, PGS plural abbreviation (pages), and [New York city where Mark Twain is buried], ELMIRA. Pop quiz: Where is Nathaniel Hawthorne buried? Or Harriet Beecher Stowe? Zero reason for folks to know Elmira if they’re not from there, and an author’s birthplace or hometown is far more relevant than their burial site. Did this feel more like a Wednesday puzzle to you? I didn’t time my solve, but the theme’s violation of two standard crossword “rules” (no repeating key answer words in the grid, no unchecked squares) may push it towards Wednesday.

Fave bits: FATBOY SLIM; SHEEPLE; DISSENTERS and HER HONOR putting me in mind of Justices Ginsburg, Kagan, and Sotomayor; SUNSET clued as a verb; and KATE clued as [Feminist Millett who popularized the concept of the patriarchy]. I do have a hoodie that says MY FAVORITE SEASON IS THE FALL OF THE PATRIARCHY.

A few small dupes caught my eye: HBOGO and GO SEE, CAN I and I’M OK, SEEN IN and EASE IN. Call me a stickler, but I like it when such overlaps are minimized, if not eliminated altogether. 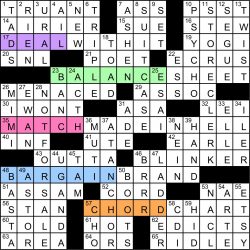 Hello there, everybody! Hoping all of you are doing amazing and that the onset of spring is treating you right on many fronts.

Today’s offering definitely strikes a pose, in a sense. Each of the five theme entries, all going across, all start with a word that can complete the phrasing “strike a … .”

Wasn’t too familiar with ACTH upon first glance, but now knowing that that controls the production of cortisol, I’m now much more aware of how important that hormone is (24D: [Pituitary hormone, for short]). Loved the clue for YOGI and the riff from the nickname of another New York Yankee great, Joe DiMaggio, known as the Yankee Clipper  (19A: [Berra, the Yankee quipper?]). We have a whole lotta nothin’ all over the place in this grid, from NEIN (38D: [German refusal]) to RIEN, a word also used when responding to someone’s “thank you” (merci) in French, de rien (2D: [Nothing, in Nantes]). Not 100 percent sure I had seen the abbreviation before today, but pretty sure that INF stands for infantry (40A: [Foot soldiers: Abbr.]). After almost a week in Portland, it will be time once again to pack the SUITCASE, err, hiking bag, to continue my journey covering the next round of the NCAA Tournament, both men’s and women’s (8D: [It gets packed during vacation]). Take a guess as to where I’ll be: Chicago, San Antonio, San Francisco, or Philadelphia?

“Sports will make you smarter” moment of the day: TRIPLE (6D: [Three-bagger, in baseball]) – An homage to the triple, the toughest of the four types of base hits to achieve, especially if a player is trying to hit for the cycle in a single game (single, double, triple, home run). Seeing the clue also made me think of the rare 20-20-20-20 club: players who accumulated at least 20 home runs, 20 doubles, 20 triples and 20 stolen bases in a season. The number of players to do that in the history of Major League Baseball? Four. Two of those occurrences came in the 2007 season, with Curtis Granderson of the Detroit Tigers and National League MVP Jimmy Rollins of the Philadelphia Phillies achieving the feat. Rolling earned his 20th triple on the final day of the season. In case you were wondering, the other two players to pull off the 20-20-20-20 are Willie Mays of the New York Giants in 1957 and Frank Schulte of the Chicago Cubs in 1911. We all remember Frank’s accomplishments, right?! 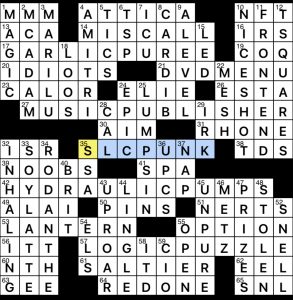 Quick post today thanks to being swamped at work. Besides being one of my favorite albums, The “OK Computer” references the computer acronym CPU (central processing unit) found spanning the theme entries.

Tough theme for me today but still a great puzzle with lots of extra fun entries and cluing plus a sweet grid. 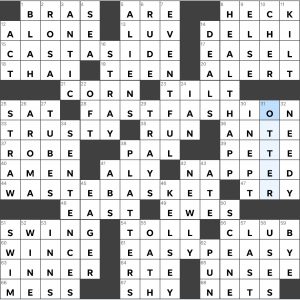 Theme: the word AS appears twice in each themer

This theme was excellent and it was right in the title but went over my head. I was looking for double the “fun”, trying to find another synonym for it, or a partial word in each that could be doubled. Thankfully, Sally and her blog post had me covered on the theme. CASTASIDE took me a while to get through crossings though when I finally saw it coming together, it filled right in. FASTFASHION is another great themer and WASTEBASKET was simple enough to fill. EASYPEASY took me a bit longer and some crossings since it’s not something I regularly use or hear as a phrase but I did like the cluing. Hopefully you all did better with figuring out the theme today!

Stumpers: CLUB (cluing got me—growing up for me there weren’t too many “clubs” just mainly sports and for the other extracurricular they went by specific names), THAI (cluing was new to me and I’m so glad to learn about this martial art!), and TEEN (cluing misdirected)

Being a mobile solver, I don’t see the full grid until the end and throughout the solve it truly seemed unique. Even when I finished, it still didn’t look to have rotational symmetry even though it does—which I really enjoyed. This grid design walks the line of both, at least for me, and added to my delight for this puzzle. Kudos!