hello and welcome to episode #720 of matt gaffney’s weekly crossword contest, a guest puzzle by Andrew Linzer called “Get It Together!”. for this week 3 puzzle, the instructions tell us that the answer is a four-letter word you’ll need to use twice to solve this puzzle. okay. what are the theme answers? there’s only one obvious themer in this very striking 31×7 grid, and it’s the central down answer at 14d: {Pictogram on some perforated packaging} IIIIII✂️, which looks like nonsense in this paragraph but resembles a dotted line and scissors in the grid. the ✂️ crosses 65a, {“Edward ___” (1990 movie)} [SCISSOR]HANDS. so the pictogram is representing “cut along the dotted line”. (in my character set, the scissor emoji has blades pointing down rather than up, but let’s use our imaginations.)

what do we make of this? well, if we do indeed cut the grid along the dotted line, we get two half-grids, each 15 by 7. (or 15.5, if you include the remaining half-width column resulting from 14-down itself being cut.) there are various things you could do from here, i suppose. one is you could rotate one half 180° and overlay on the other half so that the black squares line up, because the original grid does have crossword symmetry despite its very weird dimensions. that was the first thing i thought of, but i didn’t see anything interesting resulting from it.

the other thing i just thought of, having written the previous paragraph, is that two 15×7 halves are what you’d get if you cut along the middle row of a normal 15×15 crossword. so perhaps we’re supposed to just stack these two halves on top of each other to make the grid back into a 15×15. 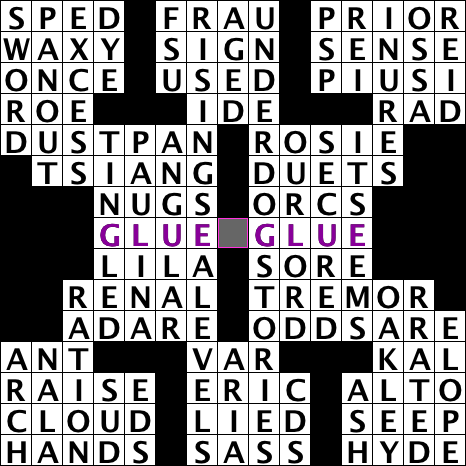 there’s a pair of four-letter spaces in the middle that are needed to connect the top half to the bottom half, and in both places you need to use GLUE to turn the downs into valid answers: TIN + LED becomes TINGLED, PAU + INA becomes PAULINA, ANG + LAR becomes ANGULAR, OUR + ORD becomes OUR LORD, SEC + RED becomes SECURED, IT’S + EMS becomes IT SEEMS, and most spectacularly, RISINGS + A-LEVELS becomes RISING SEA LEVELS and UNDERDO + STORIES becomes UNDERDOG STORIES.

all i can say is: wow! this is an extraordinary meta. start with a wildly creative idea—taking the top and bottom of a square grid and turning them into the left and right halves of a really short wide grid—and turning into this puzzle is a work of sheer genius. the “cut along the dotted line” pictogram is delightful. not only that, as an added layer of elegance, once we cut that column out and put the pieces back together, all of the across entries that intersect that answer become different (sometimes not that different) valid entries when they lose their I: PRIORI -> PRIOR, SENSEI -> SENSE, PIUS II -> PIUS I, RADIANT -> RAD and ANT, I RAISE -> RAISE, ICLOUD -> CLOUD, and ✂️HANDS -> HANDS. in the reconstructed grid image, there are no bogus entries. it’s a totally legit 15×15 grid (okay, yeah, there are a lot of black squares, but still) with eight entries of 7 or 15 letters connecting the top and bottom halves. it’s absolutely jaw-dropping.

five stars for sure from me, and thank you to andrew for sharing this masterpiece with us. how’d you all like this one?

This entry was posted in Contests and tagged Andrew Linzer. Bookmark the permalink.