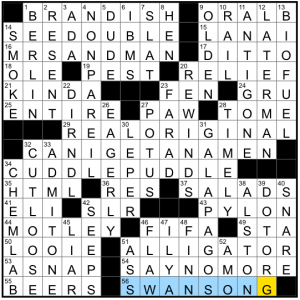 Hey folks! Sophia here filling in for Amy for the next two NYT Saturdays, starting with today’s lovely offering from Ashton and James. I’m a person who prefers higher word count themelesses with a focus on packing in as many great answers as possible, and today’s 68-worder (hey, for a Saturday that’s high) does that in spades. I love the central stack – the second I saw 34a’s [Horizontal group hug session] I thought “oh my goodness CUDDLE PUDDLE!” and I was hyped from then on out. CAN I GET AN AMEN and REAL ORIGINAL are also, ironically enough, incredibly original answers.

For me, solving the NE/SW and NW/SE corners of the puzzle were different experiences entirely. The NE fell easily for me, as did the SW (well, it did once I got over the idea that ELI couldn’t be right because another clue referenced “Elijah”). However, the other corners were a different story. For the longest time, I had BERLIN and nothing else in the top left corner! I think those corners felt especially challenging because of how few ways there were to enter them from the rest of the puzzle. For example, even though I had solved most of the center of the puzzle, because I didn’t know the GALAPAGOS clue, it didn’t help me in the SE. I didn’t mind it though – Saturdays are meant to be a challenge, and I liked that most of the difficulty came from cluing misdirects as opposed to esoteric words or tricky trivia.

Happy Saturday everyone! Remember not to covet your neighbor’s ASS this weekend. 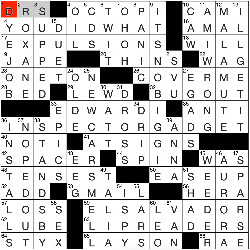 I was expecting a lot out of this byline and the puzzle did not disappoint. As far as I know, this is Carly Schuna’s first published themeless (although not Will Nediger’s first), but — spoiler alert — I’ve seen another one of hers in my capacity as Inkubator themeless editor, it’s pretty great, and I can’t wait for you all to see it when we publish it.

Highlights of the grid:

I’LL GET IT and AM I WRONG and YOU DID WHAT and IT’S NO BIGGIE make this puzzle feel like a bit of a conversation, in a good way!

Quibble: I could deal with a harder clue for EL SALVADOR than [Smallest Central American country], since if you have the first two letters, as I did, you can drop the rest of it in there without crossings even if you know very little about geography, as I do.

But, a highly enjoyable puzzle overall! 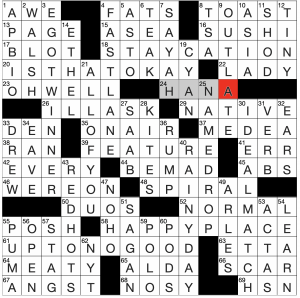 Well crafted puzzle today. Had a few hangups here and there, particularly out of the gate as I did not know Kate WALSH and I found the clues for PAGE and AP BIO oddly specific ([Sheet in a diary] and [H.S. class where students study their cells] respectively), so I was not confident with my entries. Also, had IS THIS OKAY? instead of the correct IS THAT OKAY?

Thanks for this one, Catherine. 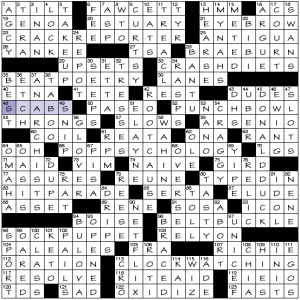 In this belligerently-themed crossword, the first words of phrases are synonyms for hitting.

The language is rife with words relating to impact, isn’t it? Grid’s integrated and flows smoothly.

Theme adjacent, and cause for complaint (again): 48a [Strikers’ foes] SCABS. NO. The striker’s foes are management and owners. Framing it as strikers vs scabs is exactly what those parties want to promote. Same thing writ larger in society and the economy—the 1% want everybody else angry and distracted with fighting each other, hence the prevalence and promotion of racism, xenophobia, and a litany of other constants. That’s the “game”. 63a [Diatribe] RANT. 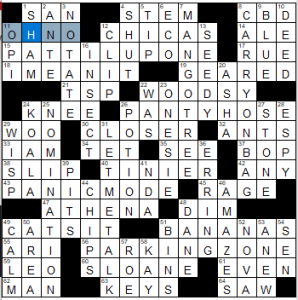 Theme: Each themer is bookended by the letters of PANE – the “broken glass” of the title.

Fun set of themers – PANIC MODE was a highlight for me. I didn’t see the connection til after the solve, and today I was in the right mood to enjoy that rather than resent it. So huzzah.

Lots of room for connective down entries here. Learned something new about MANGO TREEs [7d National symbol of Bangladesh], and I couldn’t tell you why, but I loved CARRY ON BAG at 8d. That whole area had neat things – WOODSY, the Cree flag, a Macbeth reference [10d “The ___ is done”] – and new-to-me musicians ASHA Bhosle and The Lady of RAGE. Big fan of learning new stuff.

Passing on notes today because I’m running late. Have a great weekend! 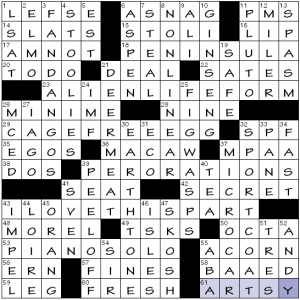 Typical Stumper solving experience once again—a random entry here and there, followed by stymies, which I was gradually able to chip away at via logic and leaps. So let’s highlight 6a [Hit __ ] A SNAG, 13d [Cause of a hiccup] SPASM, and 8d [Creative, as reasoning] NONLINEAR.

Elsewhere, the crossword offered rather a lot of long and longish entries. 23a [Xenomorph] ALIEN LIFE FORM (pretty much literally), 29a [It may not be all it’s cracked up to be] CAGE-FREE EGG (“Cage-free eggs indicate that hens were not kept in battery cages, allowed instead to move about the egg production barn. But cage-free does not mean hens were given access to the outdoors. They were also likely stocked at high densities, meaning there was no limit to the number of birds in a given barn. These birds are given very little space in which to live.” source), 39a [Overlong addresses] PERORATIONS, 43a [Pre-presentation rave] I LOVE THIS PART. Plus some nines and eights.