NEWS
The New Yorker just announced that it will be adding two more daily crosswords to its schedule, occupying the full weekday slate. “Monday through Thursday, the puzzles will be themeless and will decrease in difficulty each day, with a new beginner-friendly puzzle on Thursdays. For the first time, Friday’s puzzle will be themed, of light to moderate difficulty.” There will be an expanded roster of constructors. 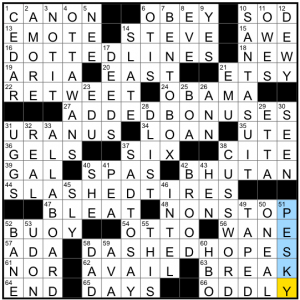 Hey folks, Sophia here after watching a wild Oscars broadcast with some very predictable awards! Today’s puzzle is probably best explained through the theme answers themselves:

Interesting theme for a Monday! The best crosswords in my opinion are ones that let me look at words in new ways, and this one certainly did that. I loved the aha moment that came from figuring out the pun-ctuation clues (haha). At first I had no idea what was going on, but once I got the concept of the answer, the rest fell quickly. None of the answers are incredibly flashy, but they are a solid set all around. ADDED BONUSES feels like a bit of a punctuation outlier here, but I don’t mind it because it follows the same structure as the other answers.

Super solid Monday level fill all around here, with NOT IT as the only semi-shaky answer in the entire puzzle. That’s especially incredible when you look at the number of exciting answers Leslie was able to cram into this puzzle without sacrificing fill quality: ALL ABOARD, SAD TO SAY, BENTO BOX, CUSS WORD, SANTA SUIT. For a Monday, I also like that none of the long answers involve pop culture or proper nouns that might only be known to a certain subset of solvers. I think this puzzle should have mass appeal to the NYT audience – it certainly appealed to me! 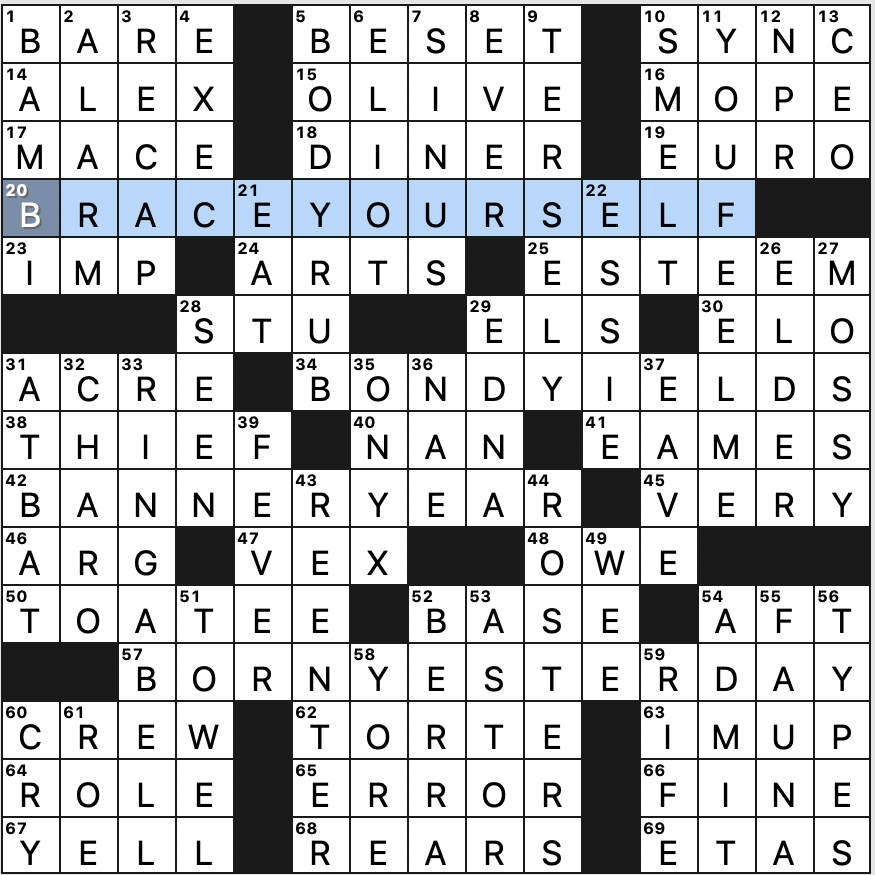 Solid Monday-level theme. Not a lot to say here, but I like the chosen entries. BOND YIELDS is maybe a bit ho-hum, but the rest are nice. Hey, how about a Russian leader we could actually respect a little?

RING A BELL and “YOU FEEL ME?” in the fill are fun even though the latter dupes the YOU in one of the themers. And a BODY RUB makes for a feel-good entry.

Clue of note: 1a. [In the altogether]. BARE. I don’t think I’ve heard this idiom. How old is it? Sounds old. 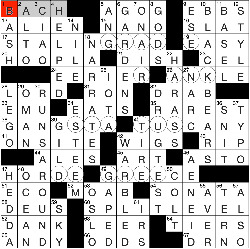 I have very little time today to go through this one, so it’ll mostly be theme explanation today. The revealer at 60A [House with short staircases, and a hint to each row of circles] gives us SPLIT LEVEL, because the circled letters in each theme row are SPLIT by a black square, and each set of circled letters spells out a synonym for LEVEL.

Very easy grid as is par for the course from Lynn, and you’ll never get any complaints from me for putting BACH in that mood-setting 1-Across slot. 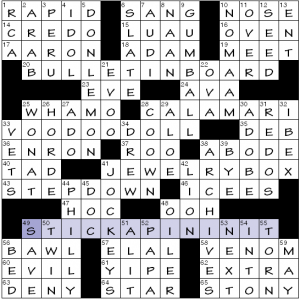 … and edited by David Steinberg; don’t know if something familial is going on, but it seems likely?

Odd that just two of the three theme clues are questionmarky, and my hypothesis is that any attempt to make a cutesy or punny clue for VOODOO DOLL would carry unwarranted cultural baggage.

Nevertheless, a good theme and an easy-breezy crossword. 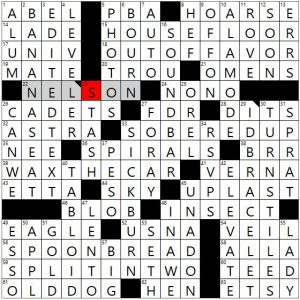 Tim Croce-esque grid from BEQ today, with stacks in each corner and 8- and 9-letter entries flowing from the edges into the middle. It makes for a connected grid that offers plenty of alternative paths when I got stuck.

I had to work down the left edge after getting stuck at [22a “Attica” documentarian Stanley _____] NELSON — perhaps if I had watched the Oscars instead of soccer last night I would have gotten it, but that’s a choice I’d never make — and ended up bouncing around quite a bit. OUT OF FAVOR [18a No longer highly regarded] and SICK BURN [33d Diss that’s going to leave a mark] were highlights for me, while I struggled to piece together OREL [25d Russian city on the Oka River] and got slowed down by “onoff” instead of OFFON at [9d Switch labels]. Most of the rest of the grid was solid but passed without much reaction. On the whole, an enjoyable solve and solid challenge. 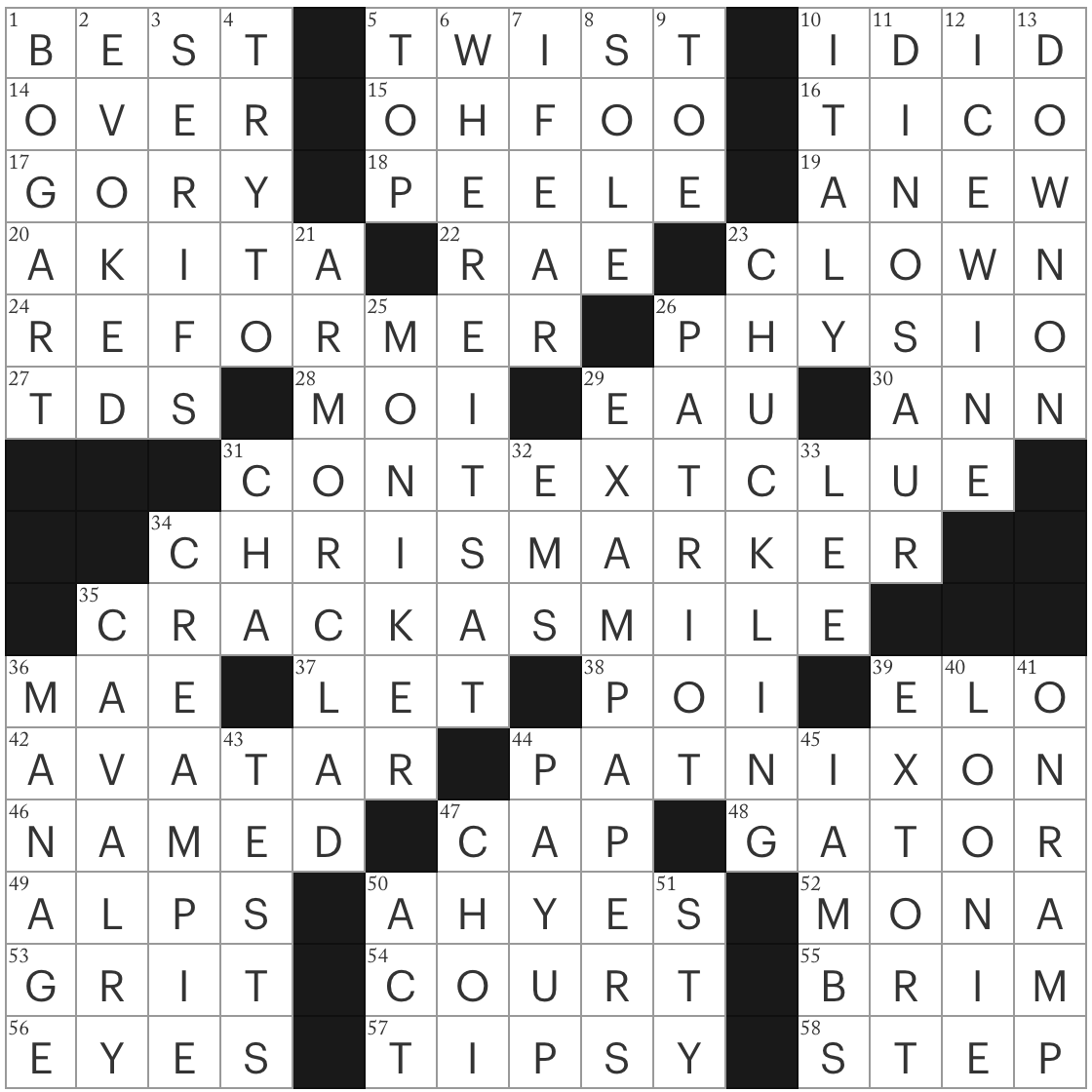 Clean but crunchy puzzle today with lots to enjoy. My Monday brain took quite a while to put the pieces together, but while tough the puzzle was thoroughly enjoyable. Of the long across answers, I got CRACK A SMILE first and then filled in term PAPERS – went back and got CONTEXT CLUE which allowed me to fix my error and get to EXAM PAPERS.

11D [One who hasn’t adapted to the times] DINOSAUR

3D [What Georgia has that Geneva lacks] SERIFS

Here’s some ELO in honor of spring:

Theme: The first part of each theme entry is a family member 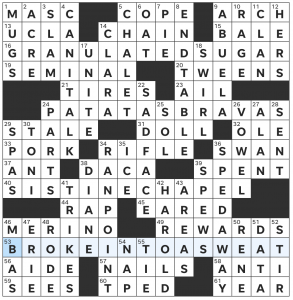 After I got “gran,” I wondered if this puzzle would use all English terms for family members, or if they’d mix it up. (DID I STUTTER would have been an awesome theme answer if they’d done the latter.)

I was slow on this puzzle!! My solve times for USA Today puzzles are around 5mins, and this one was over 10. Did you guys find it hard? I’ll go through some thoughts on the clues, including some I thought were hard.