Today’s revealer made me laugh. It’s a cute theme and appears to me to be completely original (watch someone post a link in the comments to some duplicate puzzle from three years ago…).

Each theme answer has a set of four circled letters that appear to make no sense at all. 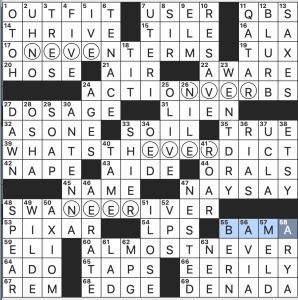 Finally 60a ties it all together in a very satisfying way. 60a [Rarely….or what each set of circled letters is?] is ALMOST NEVER. Fun!

What I didn’t know before I did this puzzle: that there was a Stephen Foster biopic. 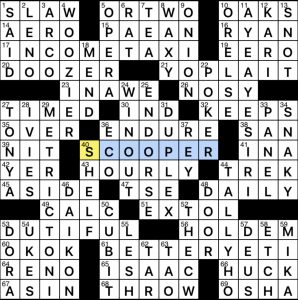 Hello lovelies! This week’s theme involves adding the letter I to the end of common phrases and allowing hilarity to ensue.

Theme: WINGED MIGRATION (37a, [2001 nature documentary, and a hint to the circled letters]). The other four grid-spanning themers each feature a TERN in circled letters. Taken together, the TERN seems to migrate from left to right as we go down the grid. 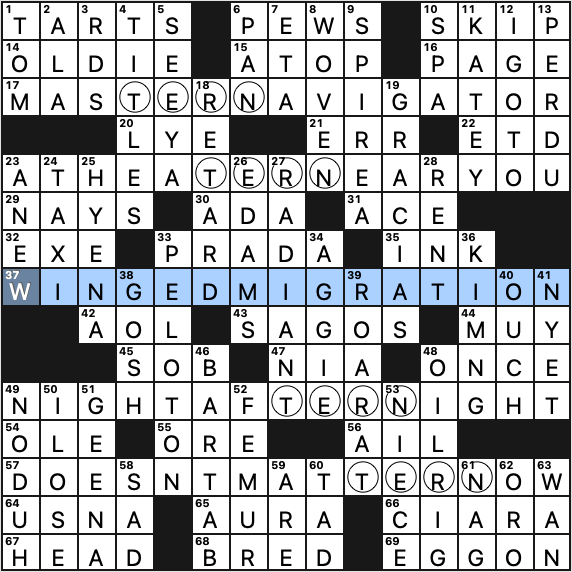 This theme slowly won me over. I wasn’t on board at first, since I had issues with the first couple entries, but then I learned that the Arctic tern is the bird with the most epic migration pattern of all earth’s critters, going from pole to pole and back each year. Given that I’d never heard of the documentary in the revealer, I’m wishing a simple TERN was the actual revealer, and its clue highlighted the bird’s migratory stamina.

In the fill I like PELOTON, RADIANT, and GRACIAS, but am really disappointed at the presence of 18d, even clued as a verb [Slow down]. When people look at it in the grid without its clue, how many of them pronounce it as the slur? I realize the word is holding three theme answers together, but there are other options though they’d require significant change to the grid (worth it, in my book). Other challenges in the fill: SPIREA, PERDU, ROAR AT.

On the other hand, it’s cool to see KIM NG in the grid at 36d [Baseball’s first female general manager]. I didn’t know her name, but the crossings are all fair.

Mixed feelings on this one. Three stars.

Theme: Each theme answer is the location of a specific industry. 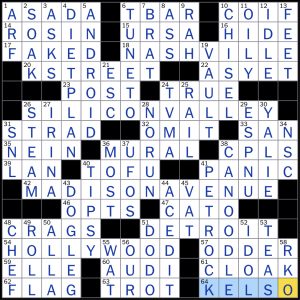 Wow! Six theme answers to start your Tuesday. I got NASHVILLE and SILICON VALLEY first and was definitely wondering for a bit what the K of 2d [“Marinate, e.g.”] SOAK was doing next to the S of 3d [“Shows curiosity”] ASKS before putting together that the lobbying industry was in D.C.. It’s nice that MADISON AVENUE is there as another street-based industry, since everywhere else is a larger area. This definitely felt like an early in the week theme, because SILICON VALLEY really gives it away almost immediately. 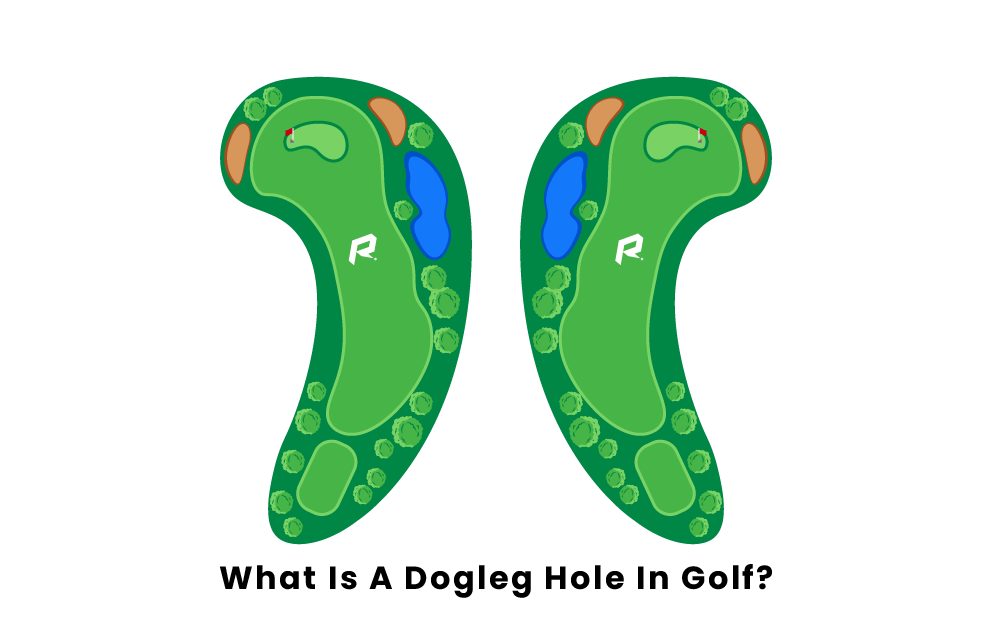 This is a dogleg. You learn something new everyday.

Generally, I thought that this was a solid Tuesday. I’m always confused by ROSIN versus RESIN, even though I shouldn’t be by now. I also really enjoyed the inclusion of both 41d [“Gag gift in a ventilated box”] PET ROCK and 38d [“Make out”] CANOODLE. Despite having golf-adjacent my whole life, I was unfamiliar with DOGLEG, so I’ve included an image so that we can collectively share my new understanding.

Other standouts include 40d [“A bit lit”] for TIPSY, 51d [“Chowderhead”] DODO, and 16a [“Cry just before the guest of honor arrives at a surprise party”] HIDE.

THEME: Snacks are “broken” in common phrases, with part at the beginning of the phrase and part at the end. 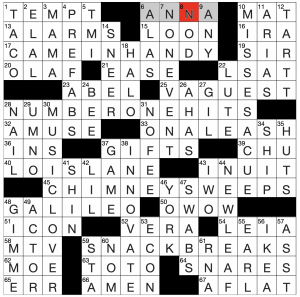 This puzzle needs circles. It didn’t much bother me as the snacks were pretty easy to spot, and I’m sure others who are accustomed to Universal’s bizarre “workaround” to compensate for the dated technology they use had no problem. But without circles, it lacks some of the potential synergy a solver can take advantage of for a better solve experience (i.e. maybe the solver sees the CH at the beginning of one answer and automatically fills in the I then PS and then easily spots CHIMNEY SWEEPS). It’s also unfair to newer solvers, who, from my experience, almost never understand the letter-counting instructions.

I was told by a very credible source that fix was on the horizon. That was over two years ago. Does anyone who regularly solves via the webapp particularly enjoy it? Especially in comparison with (literally) every other publication’s online solve technology?

Anyway, theme itself is fine! NUMBER ONE HITS and CHIMNEY SWEEPS seem a bit bizarre as plurals. How can you not uncover the latter and not immediately conjure up Mary Poppins? I think that’s the only time I’ve seen more than one CHIMNEY SWEEP together.

Favorite entry was NON-EVENT. Nothing much else stuck out to me. Coulda done without OW OW, especially crossing the partial IWO.

**This appears to be a debut! Looking forward to more from Julia! Congrats!

A fantastic puzzle today, with a great theme, lots of wonderful entries and cluing, and a fun grid! 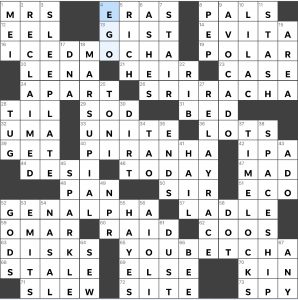 Theme: each themer ends in HA, like a last laugh (“ha ha ha”)

Today’s title had me looking for laughter of all sorts at the end of the themers and after the first two filled it, then it became clear that HA was the shared type of laugh ending each one. Even the clue makes me want an ICEDMOCHA, which is always a reprieve after some SRIRACHA, though sambal and hoisin sauce are usually what I pair with pho so this second one stumped me for a bit, especially with that first “r”. No doubt what was being clued with PIRANHA, as many a cartoon taught me early about these feisty toothy fish. The first part of GENALPHA I filled right in but needed a couple of crossings for the second half, which I haven’t really heard used much yet. Apparently it’s for people born in the early 2010s through mid-2020s, so the youngest generation currently. Does this Millennial now feel even older? YOUBETCHA! My Minnesota upbringing requires me to say it as “Ya, you betcha”, though—or is that just my family?

Stumpers: LOTS (I was thinking “ramp”, “spot”, “space”), SLEW (took me crossings, as the clue didn’t quite get me there today), and GIST (usually I think of it as “get the—” as for the essence or core of something instead of the thing itself)

Spot on cluing, with a pleathoa of different types and some excellent punny/creative cluing such as [Bone in a cage] for RIB, [Grass that comes in a roll] for SOD, and [Nwodim of “SNL”] for EGO. So good. Loved today’s puzzle and looking forward to hopefully more from Hannah in the future! 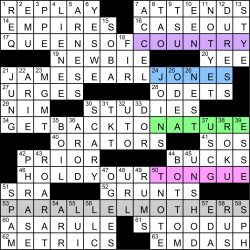 Hello all! I’m almost done with two-and-a-half weeks of covering March Madness and reporting for it, so just popping my head in in the meantime for this grid, which was a fun one!

Each of the first four theme entries, from top to bottom, feature a word at the end that can also come after the word “mother.” Then we have the fifth theme entry that acts as the reveal, the timely PARALLEL MOTHERS (53A: [Oscar-nominated 2021 film starring Penélope Cruz…and a hint to the puzzle theme]).