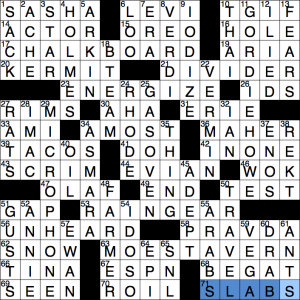 hello and welcome to episode #722 of matt gaffney’s weekly crossword contest, “I Kid”. for this week 1 puzzle that came out on april fools day (also the first day of the ACPT), the instructions were quite unnecessary. what are the theme answers?

the theme answers make it abundantly clear that the prankster in question is none other than bart simpson, who is pictured in the intro sequence to every simpsons episode writing a different gag on the CHALKBOARD, and in dozens of episodes prank-calling MOE’S TAVERN. the episode where he sets up mrs. krabappel with GORDIE HOWE (“bart the lover”) and the one where he puts the MICROPHONE down the well (“radio bart”) are both from season 3, squarely in the golden age of the show.

this meta is definitely among the easiest week 1’s we’ve ever seen, and not just for solvers in my demographic who grew up on the simpsons. it’s a slight curiosity that in crossworld, MOE(’S) is more famous than bart himself; the same could perhaps be said of APU and disco STU. but in any event, bart simpson is probably the most famous prankster in modern popular culture, and the references in the puzzle are easily traced to him even for people who have never watched the show.

that’s all for me. it was lovely to see many of you this past weekend in stamford, for the first time in three years!