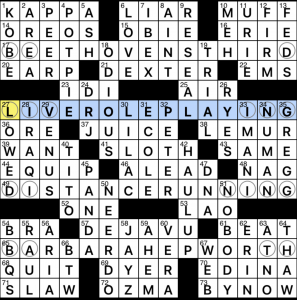 Matt mixed it up this week by having the theme material flank the entries instead of spanning the middle. The beginning and end of each theme entry when combined forms a room found in a place of residence.

Below is a photo of Hepworth’s 1946 work Pelagos. 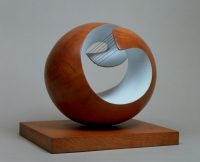 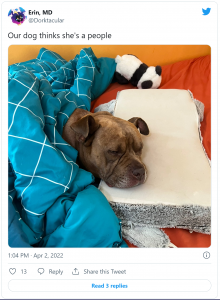 Until next week, my friends! 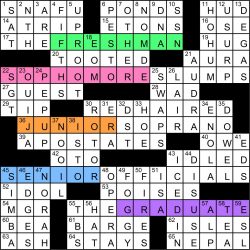 Good day, everybody! Here is hoping you’re doing well, and for all of you who got to participate in the American Crossword Puzzle Tournament (whether in person or virtually), I hope that you had a great time solving and making new friends!

We go back to school with today’s crossword, as the five themed entries, from top to bottom, takes us through a high school or college student’s cycle, with each of the four school classifications mentioned before “graduation” in the fifth theme entry.

Though it was many years ago when I found this out, it still took way too long for me to know that SNAFU is an acronym and just not a word that referred to things that were screwed up (1A: [Massive mix-up]). Liked seeing the long non-themed entries right in the middle of the grid, with APOSTATES the highlight…at least from this non redhead (39A: [Turncoats]). Oh, and for those who like campy ’80s movies that flopped, all I can think of when putting in NEPAL was the scene from an Eddie Murphy movie, The Golden Child, where he spells/yells out “Nepal” at the airport while trying to pass a dagger through security (65A: [Kathmandu’s country]). Hey, even in the height of his popularity, not everything Murphy touched turned to gold, as evidenced by that movie…but at least this was somewhat funny!

“Sports will make you smarter” moment of the day: TBS (55D: [“March Madness” channel]) – If you, like me, are used to watching the national semifinals of the NCAA Men’s Basketball Tournament on CBS, then you might have once again forgotten to tune in to TBS instead of CBS on Saturday to find those games, which were acquired by Turner Sports when it joined forces with CBS to cover the NCAA Tournament starting in 2011. (Tonight’s championship game between North Carolina and Kansas is was on the Turner family of networks.) Of course, TBS was known for televising Atlanta Braves baseball nationally for many years, starting all the way back in 1973 and ending in 2007 when Turner won a national broadcast contract to air MLB (and not just exclusively Braves games) in 2008.

Readjusting to keyboard solving after a weekend of pencil-and-paper in Stamford. I could not figure out the common thread in the theme answers and the revealer made me smile. That’s a good Tuesday theme in my book. 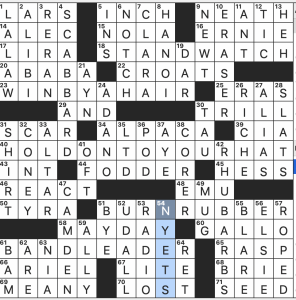 What I didn’t know before I did this puzzle: nothing from the grid, but the Google rabbit hole I fell into while researching this post taught me that the living version of ELSIE was a celebrity reputedly better known than Mickey Mouse.

Fun theme! If I’d done it last night, I might have poured myself a libation to go along with the theme. 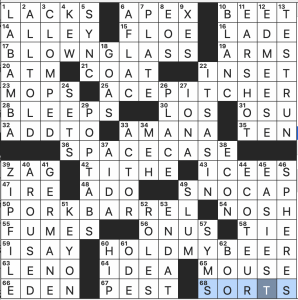 What do these things have in common? 60a tells us. [Comment before a stupid stunt…or a hint to the ends of 17-, 25-, 36-, and 50-Across] is HOLD MY BEER. Glass, pitcher, case, barrel. The containers get bigger as you go down the puzzle, which is a really nice touch. I enjoyed this theme!

What I didn’t know before I did this puzzle: that Mont BLANC is the highest of the Alps. Seems like I should have known that, but I didn’t.

Cute title which is perfectly apt. Each theme answer starts with a word that is followed by that same word but with an added BO– preceding it (so…actually an entirely different word). The BO is essentially tying the two instances of the word together. 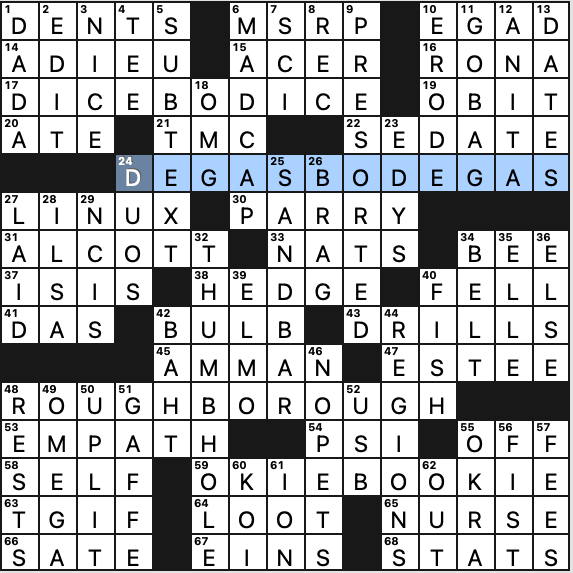 I enjoyed this from concept to execution. The choices of entries were fun and surprising, and the clues were wacky enough without being groan-worthy.

The fill shines as well with THUMBHOLE, SUBTEXT, MADCAP, and SANDBAR leading the way. Also: GO BAG, ALCOTT, LINUX, and NO PETS. BAHT might be tough for a Tuesday, especially crossing AMMAN, Jordan.

Excellent puzzle with a playful theme, great themers, lots of fun clues and entries, plus a fantastic grid! 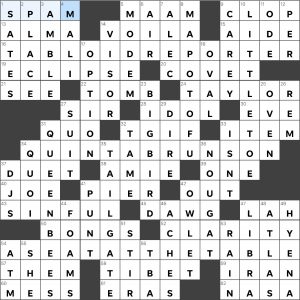 Theme: the word TAB is in every themer

Today’s title is a subtle hint at the theme, plus the word “TAB” gets indented farther into each consecutive themer. Brilliant! TABLOIDREPORTER needed crossings for the first half for me but is the perfect start for today’s theme. QUINTABRUNSON is fabulous as Janine and there’s a reason that everyone’s raving about this show, though as with anything about a type of workplace, it is somewhat fictionalized but still oh so good. ASEATATTHETABLE is a critically acclaimed album and Solange’s interview from years ago with Ari Shapiro deep dives into her music, inspiration, and purpose if you want to read more while listening to it.

Stumpers: MALI (cluing didn’t help me though it’s the capital—need to work on my work geography), LITTLETOE (had the first “l” but I was stuck on “lip” so needed more crossings), and SPAM (“rice”, “lime”, and “beans” didn’t work and I actually have a bacon flavored one on my counter but to be fair it’s for Korean kimchi fried rice and it didn’t cross my mind while solving)

The NW corner took me longer than it should. 19a, 1d, 3d, 4d plus 16a were tricky today for some reason and created an empty enough corner for me that I had to plug away at it more than usual before it all came together. I hope that you all had an easier time solving, especially that section today.

THEME: Common phrases where the last word is a synonym for “place of business” 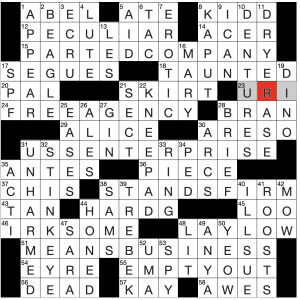 That’s a lot of themers for this unusually low-word-count grid (70!). The result is a much tougher than usual puzzle (for me at leaast). Not necessarily bad! Just tough. That NW corner in particular stumped me in a way that I can’t ever recall being stumped before in a Universal puzzle. Great clue for KIDD [Apt-sounding surname for a child], but having only the 2nd letter didn’t quite help. Couldn’t see TAUNTED for the life of me (really wanted TEASED!), ACER, the cleverly clued DENTURES, DRY ERASE, URI that isn’t a Geller… I fell pleasantly flat for a while.

Honestly, I enjoyed this more than a typical puzzle, but I pretty much ignored the theme, which was overshadowed by entries like STINK EYE, HARD G (clued GIF style). EMPTY OUT, etc. The phrases in the theme are fun, though I confess I don’t quite understand FREE AGENCY as clued [*Packer’s status before moving?]. The theme itself is rather dry.

Overall, enjoyed the rarely seen bite, even if the theme is forgettable.

P.P.S. This appears to be a debut for Garrett! Congrats! Daring grid for the first time out- good stuff!