The theme of this puzzle was more interesting than I thought at first. The fill was irritating. 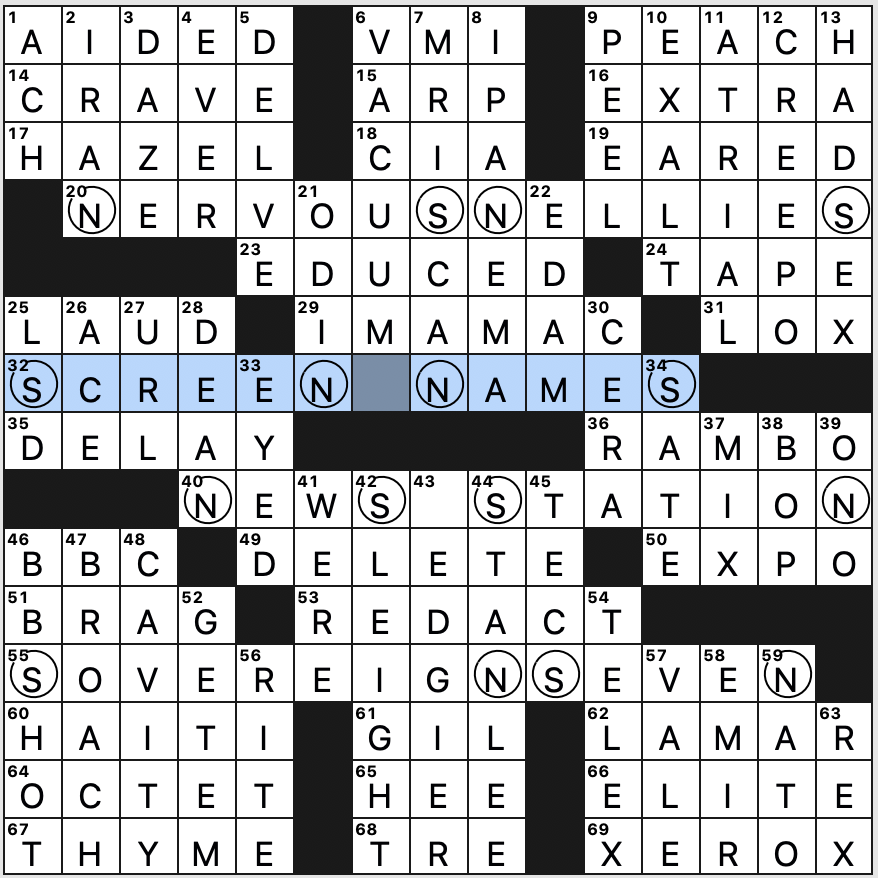 Each theme answer has the Ns and Ss circled and each starts and end with a circle. My first impression was “OK, fine, there are N and S poles. Big whoop.” Then I realized it was more complicated than that. 6d [Light travels at 299,792,458 meters per second in one] should be VACUUM but there are seven letters in the answer. Hmm. It crosses two theme answers.

So each word in the theme answers is a magnet. Two attract each other and two repel. Solid, consistent, and feels new to me. I like it when I have to figure out the theme to make sense of the puzzle, which I had to here. I’ve never heard of the SOVEREIGN SEVEN. I don’t know much about comics, so I have no idea if this is obscure.

So why did I find the fill irritating? Let’s start with 7d [Radiologist order], MRI SCAN. I have never seen a radiologist order an MRI (we don’t call them “MRI scans” – just “MRIs” –  but I’ll let that go). It probably happens at some institutions and I’m sure someone can produce an example. I say if I I’ve never seen it in 35 years of medical practice covering eight hospitals in four different states in various part of the US, it’s not a frequent enough occurrence to justify the clue. And that’s not the most egregious medical misstep. [Like some fibrillations] is a RIDICULOUS clue for ATRIAL. I will acknowledge that somewhere, sometime, some radiologist may have ordered an MRI SCAN. No medical person in the history of ever has seriously used the term “fibrillations” even if it appears in some farkakte non-medical dictionary. “Fibrillation” is a collective noun that does not have a plural. You can’t have “angsts” (at least not if you’re older than 16) and you can’t have “fibrillations.” I realize Peter wants to use all-original clues. Sometimes it’s not worth the effort (and yes, I realize this may be an attempt at humor, in which case it was definitely not worth the effort). See also [Like many prize cups] for EARED. I guess [Like some seals] has been used before and I suppose the handles on prize cups look kind of like ears. I still don’t like it.

What I didn’t know before I did this puzzle: never heard of the TRE Cime de Lavaredo in any language, and I didn’t know that estaban is they WERE in Spanish, especially since Peter and Freddie used the first-letter-is-upper-case misdirect to good effect in the clue.

Theme: SIT-UP (67a, [Crunch cousin, and a feature of four answers in this puzzle]). The four themers in question are all familiar phrases that feature the letter string SIT. Per the revealer, those letters turn upward in the grid at the S.

It feels like we’ve seen a lot of turning themes lately, and maybe I’m getting jaded, but they just don’t do a lot for me—especially when the turned letters are the same in every theme answer. Once you get the gimmick, that’s all there is to it, and the rest is just figuring out their exact locations. As an example of the theme type, this one isn’t bad, and I appreciate its compactness.

Fill highlights include GETS IT ON (which I just noticed features a SIT down), NOBELIST, and ALL TALK.

Counter to those is NEI [In the, in Italian], an entry that hasn’t made an appearance (per the Cruciverb database) in any publication in nearly seven years. The I is in one of the theme answers, so that’s a contributing factor, but still, it feels unfair to ask the solver to know such specifics of a foreign language. 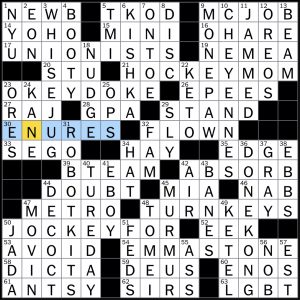 We’ve got a collab puzzle from Lucy Howard and Ross Trudeau for today’s NYT.  48A quite literally holds the KEY to what’s happening with some down clues:

There are four instances of KEY in the acrosses in the puzzle, including the one in 48A, and each one fills in part of the down answer that crosses it:

Looks like a debut for Nova Qi today! And a fantastic one at that! 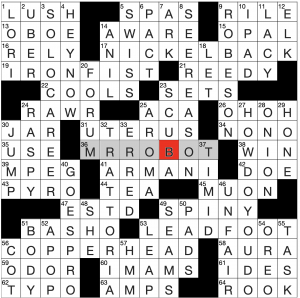 This was a great theme! At first I only notice the body parts, but the metals with them to make the robot makes a very tight, unique theme. All solidly in-language phrases to boot.

Enjoyable all around. Love the title too!

Lots new to me in the proper noun department. Far more than the typical Universal, so it was more difficult than usual. BASHO Matsuo, LORI Harvey, ARK MacGuffin, Paul ROBESON, ANIL Kapoor. Wish I saw the ret of the clue for MUON [Physics particle that anagrams to “um, no”]. Refused to accept the anagram help that was right and front of me and I didn’t see until now.

IMAMS seems a bit strange as a plural. Great (and timely!) clue for [Inits. aptly hidden in “Obamacare”] ACA. OH OH on top of NO NO… I find that entertaining.

I’d call this a 5 star debut. Excellent work with this one, Nova!

Good morning everyone! It is rare that I review a Liz puzzle, as she tends to make harder, early-week puzzles. I finished this one in a pretty standard amount of time, though. Her puzzles tend to have short fill that I find inelegant– I wonder if this is because she fills grids by hand (or did, back in the day). In this puzzle, I didn’t love DER, AUEL, DELED, LETO, NOT BE, OREIDA, TASED, ON AN, ACTE, LAITY, and SSS. 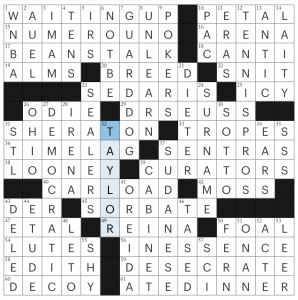 The fun from this puzzle came from the clues, in my opinion. I appreciate tricky clues that are still easy, like [Postponing retirement?] for WAITING UP and [Signature piece?] for SURNAME and [Mock duck?] for DECOY. There’s a very fancy restaurant called Decoy in NYC that serves peking duck and I have been waiting for something to celebrate so I can justify going. Can someone confirm that I understood the clue [Experts in overhead analysis?] for TENNIS PROS? Is it because they serve overhand?

I’ll leave you guys with a song by Alsarah & The Nubatones, a band with SUDANESE heritage. I saw them in Brooklyn several months ago and they sounded incredible.

Theme: Each theme answer includes ASS as a rebus, sitting in a box, making it a box seat. 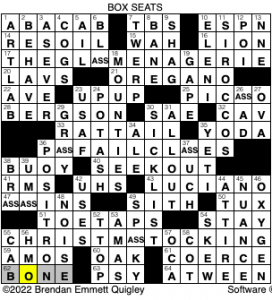 Clearly, this puzzle is packed with so many box seats. I was thrilled that this was a rebus when I got THE GLASS MENAGERIE. PASS FAIL CLASSES and ASSASSINS were also fun bonuses with the double rebus in each. The puzzle in general had a lot of names, and so I struggled with SPASSKY, BLASS (though this came somewhat easily), and even ASSAD.

18 [“Red serge wearers”] MOUNTIES was undoubtedly my favorite answer, but I loved the double Star Wars combo in 49a [“Dark order”] SITH and 35a [“Longtime fighter of the 49-Across”] YODA. Plus, 46d [“It’s all around you”] OXYGEN is a fun bonus. 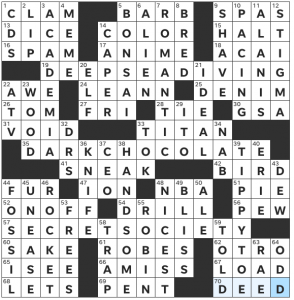 I could not see the theme in this puzzle once I finished, so thank goodness for Sally’s Take for helping me out! I really like all of the theme answers chosen today; they are all exciting phrases and I was happy to uncover them. I was a little underwhelmed by the theme as a whole, though. I thought the word SECRET SOCIETY might be hiding something, or a secret might be hidden in the puzzle somewhere else? But no, it’s just a first word theme. I still enjoyed it, but the title and theme answers made me wonder if the concept could have been pushed farther. 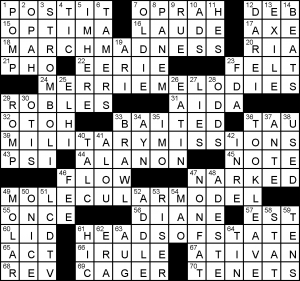 Bruce Haight’s puzzle theme was rather disjunctive. The first four answers are a vowel progression: MA/MA, ME/ME, a rather iffy MI/MI, andMO/MO; but then, we have as a revealer, HEADSOFSTATE. That explains the otherwise cryptic parenthetical names – they’re smaller towns in those states. But why those four states, in order?

There seemed to be a six letter brand-name mini-theme: POSTIT, OPTIMA, ATIVAN. If you really stretch you can throw ALANON in there too…

An unusual clueing angle was chosen for long down STROMBOLI as [The Blue Fairy helped Pinocchio escape from him]. Not the volcano, but a human character. Clearly, a) I remember very little of the details of that film, and b) it’s a way more strange story than I thought…