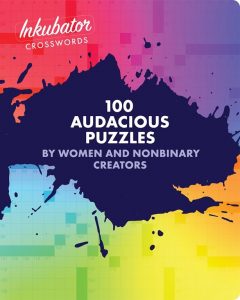 Book announcement! Inkubator Crosswords: 100 Audacious Puzzles by Women and Nonbinary Creators is publishing on April 26 and available for preorder. Crosswords at all levels, themed and themeless, some cryptics and metas. There are 25 brand-new puzzles along with 75 puzzles from the Inkubator’s first two years. More info here.

Hello! It’s me. I had back surgery two weeks ago after a hideous 15 months with sciatica, and I am so grateful (a) that there was a COVID lull so that elective surgeries could take place, (b) that I got the Evusheld shots (prophylactic monoclonals for people in whom COVID vaccines are ineffective or contraindicated) to receive antibodies against COVID so I wouldn’t be too terrified to be hospitalized, (c) that I have great insurance, and (d) that I’ve had nary a hint of sciatica since surgery and am healing up nicely. Big thanks to everyone on Team Fiend who kept the puzzle fires burning in my absence. 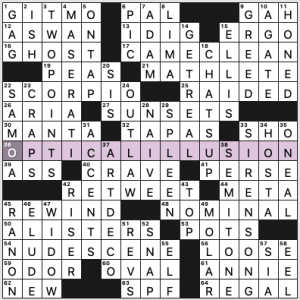 Apparently the teeny number of crosswords I’ve done in the past couple weeks didn’t help my speed one whit. I really don’t think this is a hard Saturday puzzle! It’s a good Friday puzzle, and I just need to recalibrate myself.

Four stars from me. Remind me to come back tomorrow to blog the Saturday NYT. I’m out of the habit! 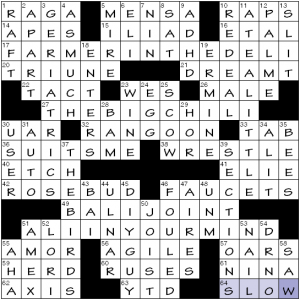 Always a minefield, themes that rely on pronunciations. In this case, only half of the four answers work for me.

Theme is a terminal I added to words in phrases, to make them wacki. Also, since each of the theme answers is of different length, a bilateral symmetry was created rather than the usual rotational symmetry.

So, a mixed reception from me.

nb: See comments section for a superior interpretation of the theme.

Theme: DELIVERY SERVICE (64a, [FedEx, for one … and what the starred clues’ answers all offer, in a way]). The other theme answers are all professions that aid people in some kind of “delivery.” 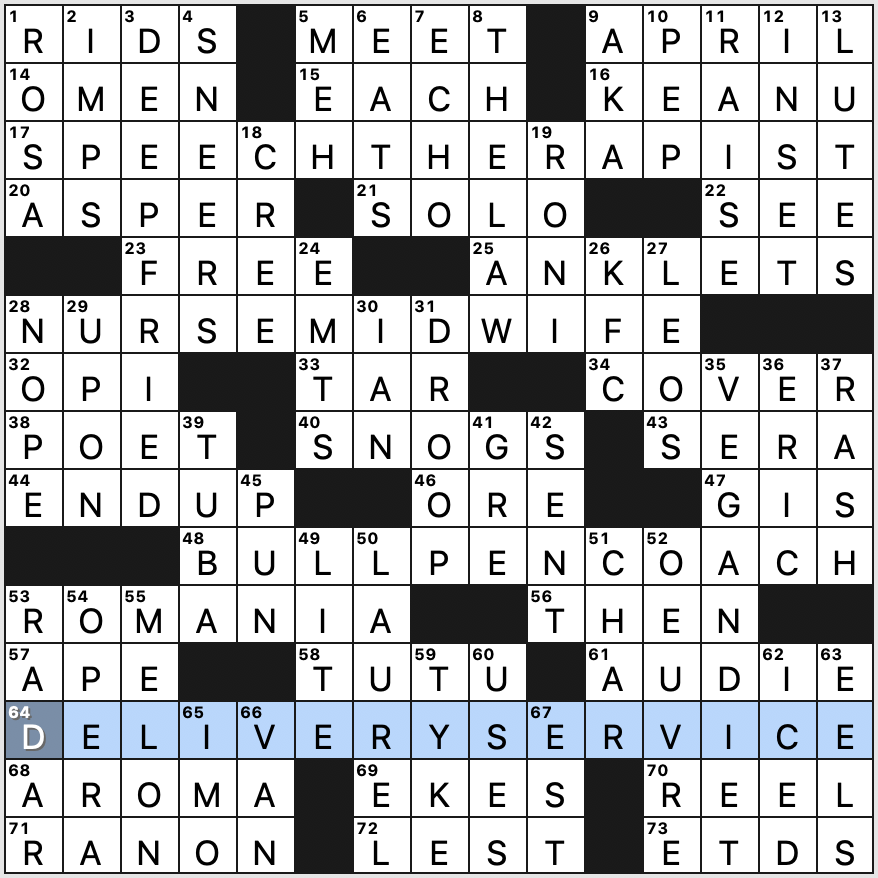 Solid, though I can’t say I found it especially engaging. Maybe I wanted it more closely tied to the thing that was delivered, perhaps with entries like LINE DANCING, BABY CARRIAGE, and PITCH PERFECT. But then, those wouldn’t work with the revealer as clued. It feels like there’s an extra step here in sussing out the theme, and it isn’t always clear what’s being delivered (mainly in the first entry).

On the other hand, the fill is pleasantly clean. I especially love the contrast of DEEP-FRIED and VEGAN DIET as the marquee Down answers. Elsewhere, I enjoyed THE LAW, ROMANIA, and making sure I knew how to spell OEUVRE.

Nice grid and a fine debut for Olivia Aldridge (congrats!), but the theme felt a little ambiguous to me. 3.25 stars. 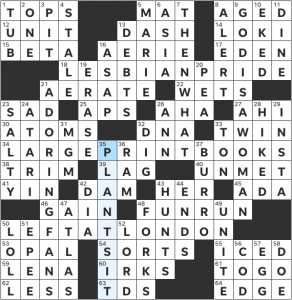 I love how queer-friendly this puzzle is! I had so much fun filling in LESBIAN PRIDE. I wasn’t familiar with LEFT AT LONDON but am so excited to have learned about her work now. Plus, we have 14a [“Genderfluid god in the Marvel Cinematic Universe”] LOKI. As a third theme, I love the accessibility of the grid-spanning LARGE PRINT BOOKS.

The corners here in this grid are a little tight here where STALE meets LESBIAN PRIDE and AERATE and UNITE hits FUN RUN and LEFT AT LONDON. However, the three diagonal stripes going from MAT to YIN, AGED to LESS, and AHI to TDS. Speaking of 63a [“Six-pt. plays for the Miami Fury”] TDS, this was such a fun way of learning about the Women’s Football Alliance, in which the Miami Fury played. Catch me becoming one of the St. Louis Slam’s ADORING FANS. Lastly, but not least, I want to point your attention to 9d [“Ariana Grande hit whose video pays homage to ‘The Creation of Adam’”] GOD IS A WOMAN and 35d [“Care for a neighbor’s orchids”] PLANT SIT.

This puzzle was TOPS. I had a TON of fun from tip to tail working through it. The fill and clues were both awesome. 10/10 would do it again.