Theme:  The second word in each theme answer can be preceded by “pick up” to form a new phrase. 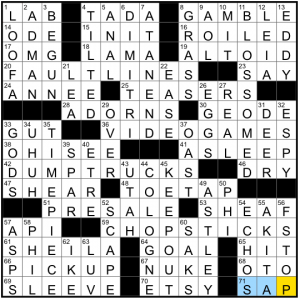 First and foremost, congratulations to Rachel on her New York Times debut! This is a classic theme type, but I feel like we haven’t seen it around in a while? I had no idea while I was solving the puzzle what tied all the theme answers together, so it was exciting to finally reach the revealer and realize what the common thread was. That being said, I found the revealer itself a little underwhelming – it would have been cool if it was a more exciting, full phrase rather than just PICK UP. It left me with a tiny bit of an “oh, that’s all?” sense on an otherwise good puzzle.

Hope everyone had a lovely weekend!

This is Mr. Tuffs’s WSJ debut. You may have seen his NYT Sunday puzzle just yesterday with the anagrammed second words in familiar phrases. I was quite impressed with that one. Let’s see what he has for us today.

Um, well. I’m not so keen on the revealer of “HEY, GOOD LOOKIN‘” with its male-gazey, cat-calling connotations. But I certainly do know the song in the clue [1951 Hank Williams hit, and a compliment for 17-, 23-, 45- and 56-Across]. Sure, it was before my time, but my parents had music of that era playing in the house while I was growing up. The other theme answers are hobbyists—for lack of a better word—using their eyes. 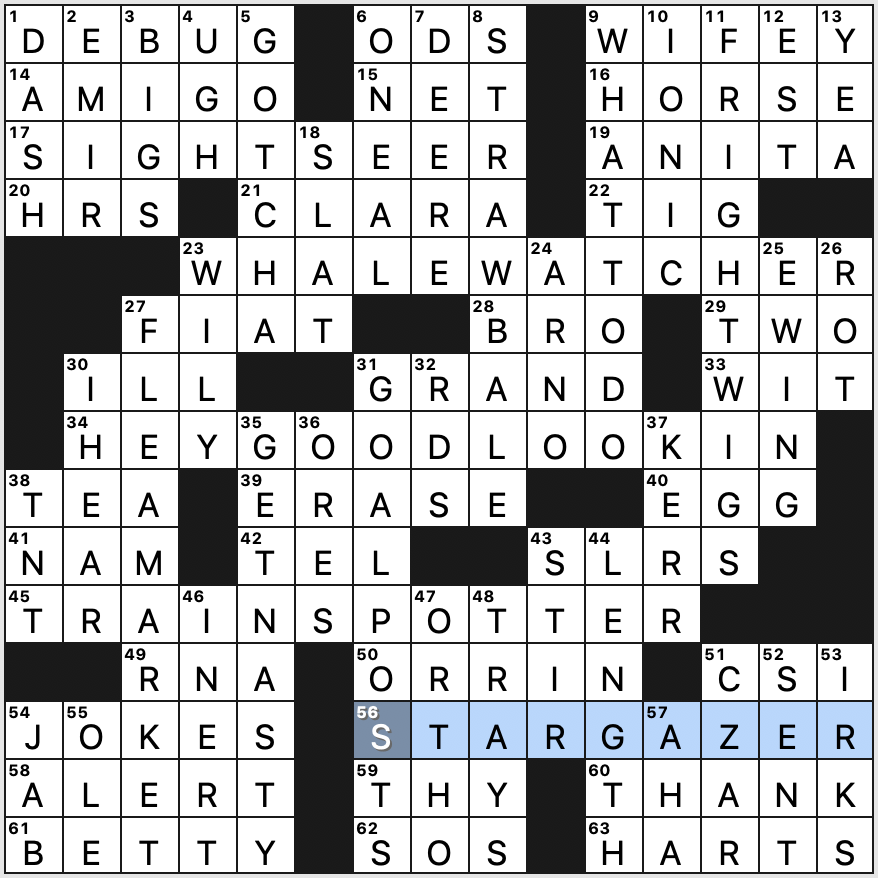 Though this is just a list of activities, I’m quite impressed with how common they are and yet how each one uses a different word as a synonym for “viewer.” It’s a really nice collection.

In the fill there are some definite highlights like “WHAT TO DO,” FRIGHT WIGS, FLEA MARKET, and GOAL POSTS. I’m not so sure about GET NASTY, and I’m even less sure about STRAW BALE; I’ve only ever heard “hay bale.”

I like the theme set, but wouldn’t have minded if a different revealer could’ve been found. 3.5 stars.

Edited to add: Don’t think cat-calling is insulting and objectifying? Have a look at this woman’s silent walk through Manhattan. 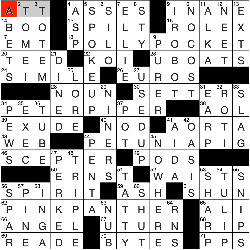 Apologies, not much time to blog this week. This puzzle’s theme is so simple it doesn’t require much explaining. There is a revealer at 71A [Second addendum to a letter … and a hint to 18-, 34-, 44-, and 62-Across], which is PPS, indicating that all the theme answers are two-word phrases whose initials are PP.

Interesting that all the theme entries are fictional characters. The fill was fine although I didn’t love that you start out with the abbreviation ATT in that 1A slot. 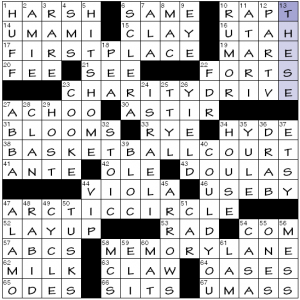 A theme I’m certain I’ve seen before, but not recently. Each of the featured phrases ends in a common street name designation. An added gimmick is that the fill-in-the-blank style clues provide a punny, Tomswiftian layer.

The rest of the fill is to me nondescript but solid.

Theme: Each of the two-word entries has a word that ends and starts with a P. 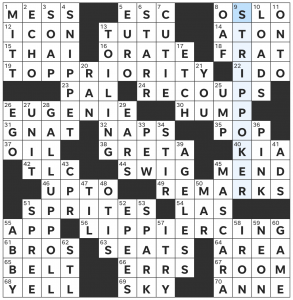 Good morning, CUTIEs! I love the shape that wraps NAPS / GRETA / SWIG in the center– the F pentomino. I so rarely see it in puzzles. Not a lot of comments from me today but I do want you to know that I put in “pot” for [Bud] before PAL. I had not heard of EUGENIE Clark or ANNE Moody, but I have now.

Not a ton of exciting bonus answers (although I like MASCARA) but I’ll always take that trade off if it means no difficult fill. Have a good Monday, everyone! 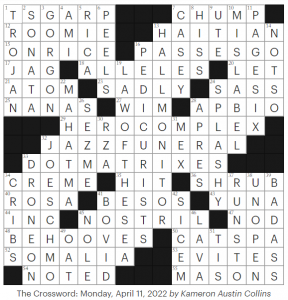 What a delight to have a thorough ass-kicking from a themeless puzzle, without the wildly oblique cluing that sometimes irks me in a Newsday “Saturday Stumper.” I do love a good challenge, and this crossword turned out to be eminently fair, with everything coming together eventually in this visually pleasing grid (love those criss-crossed stair-stepped 11s in the middle).

My biggest misstep was PODIATRISTS instead of PEDICURISTS for [Sole caretakers?]. Most of the letters worked with the crossings. Having the wrong letter crossing HERO COMPLEX‘s space hurt me, as the [Need to save?] clue was also a tricky one, and I was thinking of saving money. Another misdirect: For [Lavender or periwinkle, e.g.], I tried SHADE long before I was able to plant that SHRUB.

Fave fill: HAITIAN Revolution, HERO COMPLEX, JAZZ FUNERAL, BEHOOVES (unrelated etymologically to hoof, and both words have been in the English language for 900 years or so), SOMALIA, MASONS (I come from a long line of masons), GORGON, JOE SCHMO, HALL MONITOR (tricky clue: [One making cutting observations?], as in seeing which students are cutting class), SPLASHY, and BAD-ASS.

4.5 stars from me. Happy to really have to chew on this puzzle for a while. 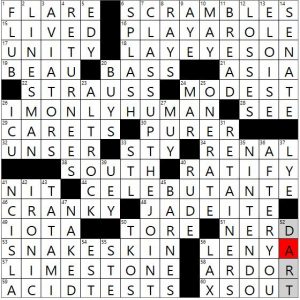 This is the fastest BEQ Monday solve I have on record, so naturally it’s a great puzzle, what else is there to say? ;)

Slowing down a bit, this is a plenty smooth grid with in-the-language long stuff in the corners, and even sparklier long stuff bridging into the middle. I mean:

These are pure delight for me, particularly CLASS UP THE JOINT. I don’t have the resources handy to know if it’s been used before, but I don’t remember it, and I adore it today.

There are a couple spots I could see being difficult: RAYS at [8d Team with a diamond in their logo] — it’s a baseball diamond; [25d Fixed FedEx shipping plan] ONE RATE — plausible once I got it, but a bit of help from the clue and crossings there, and [48a Green mineral from Burma] JADEITE, which I’ve seen before I suppose, but possibly only in puzzles, and I certainly got to JADE– and wasn’t sure what to do with the remaining three spaces. I’m also not a big fan of (either spelling of) UEY [39d Turnaround], but it and any other iffy short stuff is well worth the longer entries in today’s grid for me — AFTER YOU, LAY EYES ON are more lovely bits of themeless fill that I haven’t even gotten around to noting yet.