Happy weekend, all! I’m lucky enough to be on the tail end of Spring Break with my parents visiting from out of town – I hope you’re enjoying your time, too. :) Ok, let’s dive into this puzzle while my folks are in the other room napping: 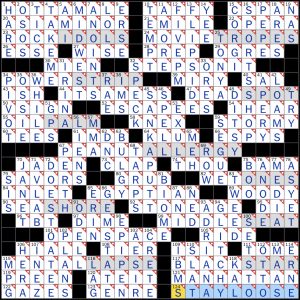 In each of this puzzle’s many theme entries, the second word must be (re-)ordered to match the clue, while both the clued phrase and puzzle phrase are in-the-language phrases.  Neat!  I have to guess that the peanut gallery to PEANUT ALLERGY transformation was the seed entry of this theme set, as it feels too good to pass up once you discover it.

That said, what I am truly stunned by is 17D: PEPE, which could have been clued via Pepe Le Pew, but was instead clued via a meme so thoroughly co-opted by white supremacists that the meme’s creator had to kill it off!?!? And yes, I’m making the hyperlink that long to belabor the point. Wow. How did no one in the editing team at NYT notice this and change it? Or was the author’s original clue about the cartoon skunk but then changed (?!) to this? I am so morbidly curious at how this kind of stuff keeps happening. To quote 44A: IT’S A MESS / [“Ugh, we have so much to sort out”].

Also, actual LOL at the editors not changing the clue for 70A: JADEN [Will Smith’s actor/rapper son]. Who was asleep at the wheel while editing this puzzle!?  Or I imagine there’s the scenario in which this puzzle was locked in and couldn’t be changed between then and now?  If that’s the case, ooooof bad timing.

I’m down with this puzzle.

THEME ANSWERS: (which aren’t really down)

Hmmm… Not sure what to write for this section. A boatload of dashes to represent the Across clues?

Instead let’s take a look at the notepad instructions:

Oh no! A band of thieves has stolen this puzzle’s Across clues. But don’t panic. They left the Down clues, and you can still use them to figure out the Across answers. When the puzzle is completed, you will find instructions for identifying the culprits. Good luck! 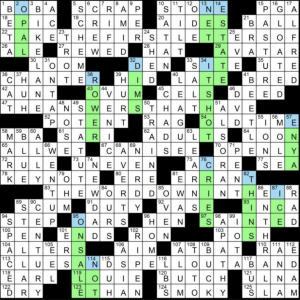 So the completed instructions read:

Easy enough! Scanning the down clues (obviously… there’s no other choice) gives us a bunch of clues with “Down” in them such as 2d [Gemstone frequently imported from Down Under]. The answer for that is OPAL, revealing the letter O as the first letter in the meta band that we’re in search of.

And of course, the band is aptly ONE DIRECTION.

Wow. This was a very bold construction by Evan, but handled so well. The concept of solving “Downs Only” (which is shorthand for not looking at any of the Across clues in order to solve a puzzle) isn’t exactly new; it’s a challenge that many expert solvers give themselves in order to spice up an easier puzzle. That may sound easy, but it’s actually (imo), very difficult. Even on a Monday level puzzle. I’ve done it a few times, but I can’t exactly call the process “enjoyable.” For me, it can be very frustrating simply because I’m so accustomed to looking at Across clues during the solve that it’s extremely difficult not to. Even in this puzzle where I *knew* if I glanced at the Across clue I would be met with a [-] I couldn’t help but contantly keep looking.

That being said, at 9:40, I believe this is my record solve time for a WaPo. I was shocked. I coulda sworn the clock would read in the 16 minute zone.

The reason that this (Sunday sized!) puzzle was so enjoyable to solve Downs Only as opposed to a (standard 15x) Monday grid is because it was constructed with the Downs Only concept in mind. It’s not enough for all the “crosses to be fair” in this puzzle. It has to be super squeaky clean in the fill with not ambiguity whatsoever, using very straightforward clues and leaving out proper names that aren’t extremely well-known.

This is not to say that all of the Downs don’t need help from the Across entries. There are plenty of areas where I needed to infer an Across entry in order to get a hint on the Down answer. For instance, I had no clue what PASTURE and GLOATED could be, but I inferred AVATAR (what else can ?VA??R be?) and figured DE?D could be either DEED or DEAD, though most likely DEED because the word I was looking for was more likely to end in an E than an A… and voila! PASTURE! That kind of stuff happened a lot.

Also, while directions, quotes, quips, etc. as themers for a puzzle generally fall flat for me, here they were so very welcome. There’s so much to infer in the theme that help with the down entries. I actually inferred TAKE THE FIRST LETTERS OF off of T?K?TH??????????????? (pats self on back). It could also be because I’m well-versed in Birnholzian tropes. I sensed I’d be looking for first letters of something…

The inferencing of the instructions was a crucial part of solving the downs for me.

REWED was the only across answer that was hard for me to accept as correct, and I was certain Mr. Happy Pencil wouldn’t make an appearance because… ya’ know… REWED ain’t a word… but when I stared at it long enough after I indeed was congratulated on a correct solve, I saw the actual answer: RE-WED (as in “marrying once again”). Other than that, all very solid entries that leave little doubt as to their validity.

So I have nothing but good things to say from my perspective as a solver, even though I was indeed frustrated at times.

However, I can certainly see why some solvers would be completely turned off by this (newer ones especially), and that’s fine. Remember, there will be another puzzle next week that you’ll probably love… and if not then, then certainly the week after.

One thing that can’t be denied is that Evan continues to take bold risks as a constructor, and this is one of the things that makes the WaPo puzzles so appealing. Not all puzzles are created equal, and some won’t (read: not “may not” … just plain “won’t”) be your cup of tea. I’d rather have a scoop of something crazy once in a while than week after week of vanilla.

That’s what makes it beautiful. 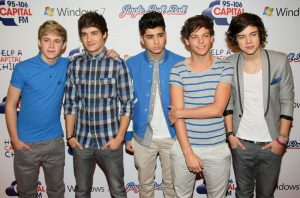 Theme answers consist of familiar phrases that have the letters IT changed to IN. 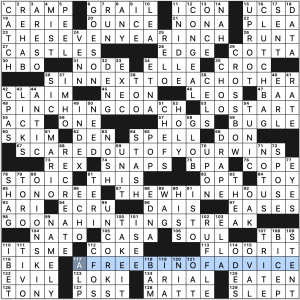 Universal Sunday crossword solution · “In for It” · Scott Hogan and Christina Iverson · 4.9.22

These were fine and there’s some welcome humor here. But it seems like a Sunday-sized theme ought to have more to it than just a single letter change, which is what this amounted to. These are some of those most common letters in the alphabet, so the theme feels very loose. It didn’t take me long to think up a handful of additional potential theme answers: CATCHER’S MINT, WICKED WINCH, PINTER PATTER, STRAIN OF MAGELLAN. Another constraint would’ve helped give the theme more weight, even just restricting the words in question to five letters or longer (thereby eliminating entries like BIN and SIN). This was certainly a fast solve and didn’t feel the least bit sloggy, but for me, I like a Sunday puzzle with a little more meat to it. YMMV, of course.

Scanning the long fill I spy CLUTCH BAG, ONION SKIN, CROSSBOW, and RECREATE. Nice. CONGEAL is a fun word, plus there’s FLOOR IT and LOST ART. I had a little hiccup with NONA [Octa- + one] which feels pretty uncommon, and “NOT US” [“We’re innocent!”] raised one eyebrow a bit only because it sounds a little awkward. But it’s connecting two themers, so it’s a tight fit.

A solid grid and a fine debut for Scott Hogan (congrats!), but the theme feels light for a Sunday offering. 3.5 stars.

I feel like I just saw a Secret Menu theme in Universal. Ah! It wasn’t a theme! It was an entry. And it wasn’t the entry that stuck out, but rather the ensuing conversation about SECRET MENUs in the comments. So here ya’ go Sanfranman! This one’s for you! 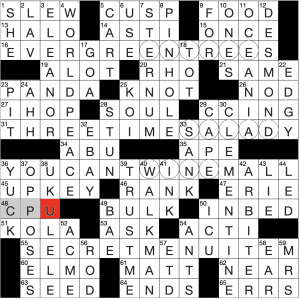 I feel like I should recuse myself from reviewing puzzles in the Universal that require circles. I can’t believe they’re still running them, and that they have not taken steps to improve their software. I wasn’t able to find this puzzle anywhere online other than at this site, so my solve had circles, but I’m willing to bet that people who see it in print or wherever it’s living online (why is it so hard to find on Sundays?) had to count letters.

Let’s just hope they were at least asked to count the right letters and it’s not a repeat of this extremely avoidable error which begs the question “How do you expect solvers to count letters when you have difficulty doing it yourself?”

Anyway, none of that stuff is the puzzle’s fault… let’s take a look here. ENTREE, SALAD, and WINE! That’s what’s on the secret menu today! I would’ve preferred if they were a bit more specific. These don’t feel like they’re all that secret :)

IHOP is in there too! I wonder if they have WINE on their secret menu… Odd that IHOP is clued as an alternative to Waffle House. Nothing should be equated with Waffle House. That’s its own thang.

Solidly constructed even though neither the theme nor the phrases that hid the theme excited me all that much (I feel like I’ve seen THREE TIMES A LADY more than a few times in a puzzle). I enjoyed the fill the most.

Theme: Each theme answer begins with a word that isn’t going anywhere. 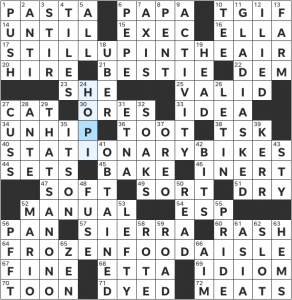 I love the grid-spanning theme answers here. It didn’t take long to get the theme based on STILL UP IN THE AIR. I thought for a second that perhaps 40a had something to do with PELOTON bikes, but then STATIONARY BIKES clicked into place.

It’s always fun to think about the phrases that are equivalent that can then trigger a sense of other similar phrases, so the double combo of 11d [“‘Great to find this out’”] GLAD I ASKED and 12d [“‘OK, it wasn’t true’”] I LIED was a nice two-for-one up in the northeast corner. It was complimented by a similarly long THAT’S A NO NO from 29d [“‘Don’t!’”]. In general, there were quite dialogue-based clues, with 14a [“‘___ next time!’”] UNTIL, 33a [“‘You get the ___’”] IDEA, and 67a [“‘OK by me’”] FINE. I feel like I’ll probably spend the rest of the day thinking about potential themers that use this mechanism for cluing.

That’s all from me! I hope that, if you’d like to go nowhere today, you get your wish.