This week Matt tells us, The answer to this week’s contest crossword is a word that (I hope) describes this puzzle’s wordplay. I wasn’t able to solve the grid until Saturday due to work, and faced the dreaded three-meta pileup (WSJ, MGWCC, and MMMM). I finally completed the WSJ grid and spotted the final horizontal entry FOUR, clued as “Number of letters in our contest answer–and the number of letters between certain pairs of letters in this puzzle.”

I noticed a lot of O’s in the grid, including plenty of “OO” fill, so I ran right down the wrong rabbit hole, looking for doubled letters. The doubled O’s in POOP and SCOOPOUT can be connected with PECT (four letters, handily). Then the doubled O’s in SCOOPOUT can be joined to FOOLS via POFF. That rabbit hole looked promising, but lead nowhere. So I put the puzzle down and shifted to the MGWCC.

I revisited the next morning, compared the long horizontal theme entries, and step one appeared: each entry was two words, and the first letter of each was separated by four letters in the alphabet: 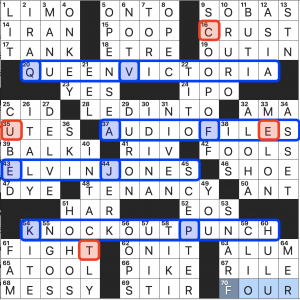 Those letters didn’t form any recognizable pattern, so I needed to find step two. I had the right idea fairly quickly: search the grid for 5-letter words that contain the four in between alphabet letters. Then I picked up the wrong grid (MGWCC), scanned, and found nothing. Solvers: have you ever done that before? Maybe it’s just me. Needless to say: it’s not helpful. One of the risks of solving multiple metas at once. I put the (wrong) grid down, circled back later, realized my mistake, and scanned the WSJ grid. There was step two:

The fifth letters spell CUTE, our contest solution. I hesitated a bit before submitting, since I hadn’t used the title in any way. I believe Inner Turmoil refers to the rearranging of the inner letters to match the five-letter entries. Either way, it was a 100% lock for me.