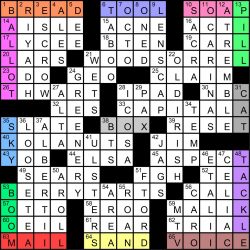 Hello there, all! I hope you’re doing well and, if you’re in areas where springlike weather has descended upon you, know that I’m jealous!

There is a lot of outside-the-box thinking with this grid, because each of the entries that make up the perimeter of the puzzle are all words that can come after the word BOX, with “box” appearing in the middle of the grid as the reveal (38A: [Puzzle theme, as suggested by 12 border answers…and the shape created by their placement]).

Lots of long, non-themed fill featured in the grid, and the ones in the heart of the puzzle, like WOOD SORREL (21A: [Edible weed with a lemony flavor]) and GREENERY stood out as the best of that bunch for me, with the latter reminding me of the beautiful foliage I see every time I take a bus to Boston for work and see the colorful trees lining I-84 (24D: [Colorful foliage]) on the way there. Remember when leaving a LENS CAP on while taking a photograph caused headaches to people and caused possible great photographs from not being captured (9D: [Camera protection])? Seems like a long, long time ago since those days given the advancement of camera technology. (I’m old enough, though, to have had that happen to me in photography class over 20 years ago!) OK, enough dating myself! Actually, more of dating myself; Anyone here remember the Looney Tunes cartoon, “Rocket-Bye Baby,” where a mix-up caused a martian baby to be delivered to earth and vice versa, and one of the babies’ names was called YOB, which is “boy” backwards (43A: [1809, for Pres. Lincoln])? Someone out there must remember! If not, here’s the cartoon’s opening and close, and you can hear the dad desperately yelling, “YOB! YOB! Where’s my Yob?” as the alien baby flies away to its real parents. No, I’m not going insane…I tell the truth!

“Sports will make you smarter” moment of the day: MALIK (59D: [L.A. Lakers guard ___ Monk]) – One of the bright spots of the Los Angeles Lakers having an uncharacteristically poor season in 2021-2022 is that it allowed some of the younger players some more exposure, and one of those players, Malik Monk, has taken advantage of it so much that he is now relevant in crosswords!! Just yesterday, in the regular-season finale, Monk scored a career-high 41 points in a Lakers win over the Denver Nuggets. The fifth-year guard out of the University of Kentucky averaged a career-best 13.8 points per game this season, and it is possible that this season launches him into NBA stardom, which, in turn, will possibly lead to more appearances in crosswords!

Theme: BACK-TO-BACK (58a. [Consecutive, and a hint to what can start each part of the starred answers]). The other theme answers are familiar two-word phrases, and each word can be preceded by the word “back.” 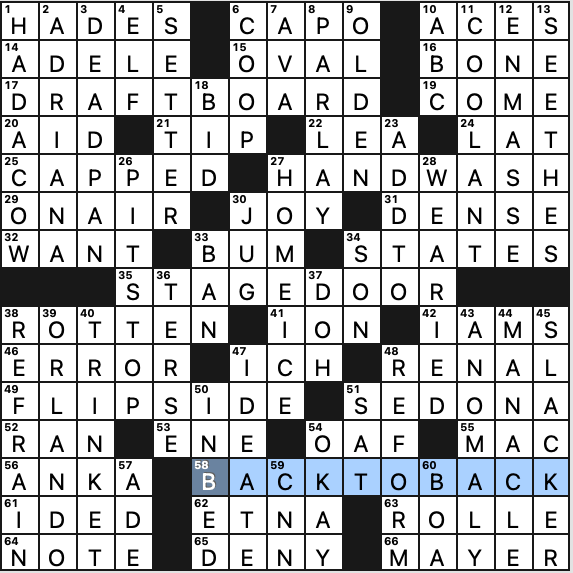 I like it. The revealer hints that both words in each theme answer get a “back,” and all the theme answers are common, in-the-language phrases. Strong execution from start to finish.

The unusual-sized central entry (nine letters) results in large corners with stacks of sevens. In a grid like this, this is where you’re likely to find the most crosswordese. But for the most part, today’s corners are quite smooth. Highlights include HAD A COW, DEADPAN, ORLANDO, TRINKET, MANACLE, and SLACKER. Plus we have HOME ICE going right down the middle and a PIT STOP at 26d. I’m not a fan of IDED as an entry, but if that’s the worst thing in the grid, I have no complaints.

Missed opportunity: 8d PARLAY crossing 22a LEA. I really wanted that L to be a T so we could enjoy a fun PAR-TAY! 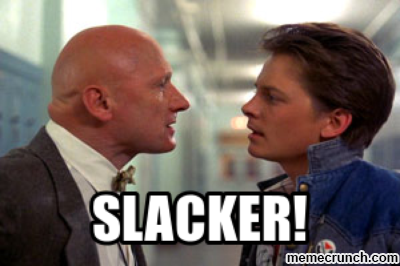 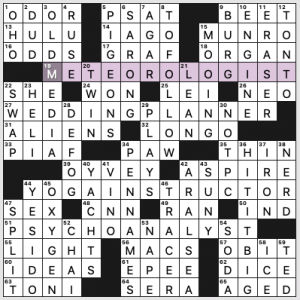 Different categories of jobs are reinterpreted to refer to specific job titles:

Not everything felt suitable for a beginner wading into Tuesday territory but overall, not too far off. Four stars from me. 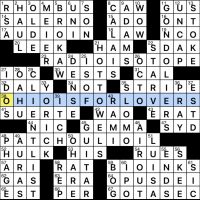 This week we’re going back to Solving 101! Each theme entry contains the letters IOI in order, to resemble the numbers attached to an intro college course:

This theme was a learning opportunity for me, as I had never heard of OHIO IS FOR LOVERS or BIOINKS. A bioink consists of cells usually combined with a biopolymer gel to create 3-D tissue. How amazing is that?!

This appears to be a debut puzzle for Michael! Congrats!

It’s too early for me to do shots.

THEME: Words that can precede the word SHOT are on the perimeter of the puzzle. 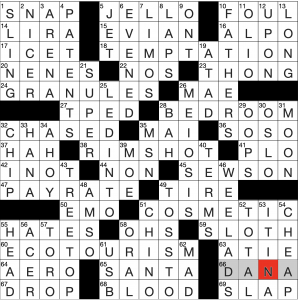 I think my favorite part of the puzzle was the title! That sounds bad, but it’s not meant to be. I enjoyed the puzzle just fine, but I’ve never seen the onomatopoetic “Ba-dum-tss!” spelled out before, and that brings me much joy.

I’m not the biggest fans of themes like this. It revealed itself instantly then it was just a matter of filling in shot words. Also my computer autocorrects “shot” to “shit” (I was tired of changing “autocorrected” words such as “duck” back to my original intention, so I taught it all the four letter words I use with some frequency) making it very difficult to type this post right now. Figured I’d share that.

SNAPshot and HEADshot are both types of photos, which feels somewhat dupish to me.

Favorite fill bit was ECOTOURISM. And if you meet any DANAs who copped an attitude recently, well now you know why. 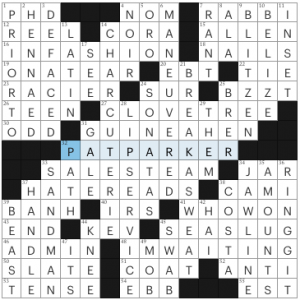 Okay, so the New Yorker’s recent addition of two more crosswords a week while I was on medical leave means we haven’t figured out who, if anyone, will be tackling the Tuesday second-hardest themeless or the Friday themed puzzle. (I may not pop in for next Tuesday’s.) But I just solved Erik’s puzzle and it’s quite remarkable. You know how sometimes there’s a stunt puzzle where, say, the letter E is never used, or all the clues start with the same letter? The stunt, if you can call it that (and really, you can’t), in this puzzle is that Erik’s demonstrated that one can craft a smooth, eminently solvable puzzle without referencing a single cis white person in it. Erik embraced the opportunity to clue answers via BIPOC peoples’ cultures. JAR is a [Kimchi container], TEEN is [Any of the four main characters of “Reservation Dogs”], and so on. Manny Jacinto’s JAWLINE. Jamaica shout-out for BRER Anancy. KEV is clued as a generic nickname, but I watched a Twitter video from Black comedian Kev on Stage not 10 minutes before solving this puzzle, and he’s my go-to KEV reference (hard to clue him, though; full name is Kevin Fredericks).

Not sure I’ve seen EBT, [Grocery-payment option: Abbr.], in a crossword before, but surely there are plenty of solvers who do use, have used, will use EBT (aka food stamps) at some point in their lives. Representation matters.

So when you see a puzzle that has, say, 10 references to white men and only a handful to anyone else, you can’t insist that crosswords are just too hard to construct to be more broadly inclusive. Erik’s puzzle stands as proof of concept: A great puzzle can make a wide range of people feel represented and seen. Five stars from me for this thoughtful and wall-to-wall interesting crossword.

A different take on the theme today that was very creative though tougher than it probably should have been, given that my sports knowledge is limited. If you are like me, though, fear not because there are so many other delightful clues and entries throughout and it’s a fantastic puzzle whether or not this theme’s in your wheelhouse. 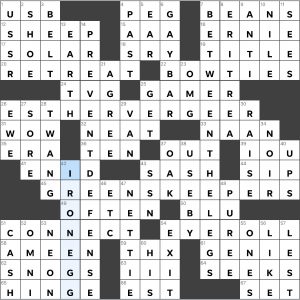 Theme: sports related people and terms with only “e” as the vowel

Hopefully today’s themers were easier for you than they were for me. The only one that I got initially was GREENSKEEPERS, though the first “s” eluded me at first so it remained partial for a while until it clicked that links were multiple. The rest I had to get through crossings, and BETWEENTHELEGS was particularly tricky for me being crossed with a film I’ve not seen or heard of (though that’s on me and BEANS sounds excellent so I’ll be watching it asap). Glad to now know ESTERVERGEER who not only has this astonishing record but also an accomplished career. PREVENTDEFENSE is something that I have probably heard watching the occasional football game though not fully understood and to some it’s not a great strategy both in football and in life.

Stumpers: NAAN (brilliant misdirect—had me trying “press”, “bulbs”, “clove” before the entry which is my favorite type), USEBY (being a down entry–read vertically–I think made it harder for me to puzzle out having not personally seen this phrase in a crossword before, needed crossings), and SASH (was thinking “purse” in a line instead of cross-body but a fun clue!)

Lots of excellent entries and clues in today’s puzzle! Much to learn as well, which I always enjoy, though it can make some areas trickier if I really don’t know certain things but finished in the end anyway. Also, the grid is amazing. Maybe it’s just me but despite the rotational symmetry, it feelings like it is asymmetrical and has a sense of movement—then again, mobile solving does give a different experience with only seeing partial grid until the very end. Fun puzzle indeed!

Plus, I need to find or make an IRONEGG soon as they sound incredible and similar though different to a ramen egg which is a favorite of mine.