This week’s AVCX Classic puzzle is a variety puzzle with a meta closing this Sunday.  Happy solving! 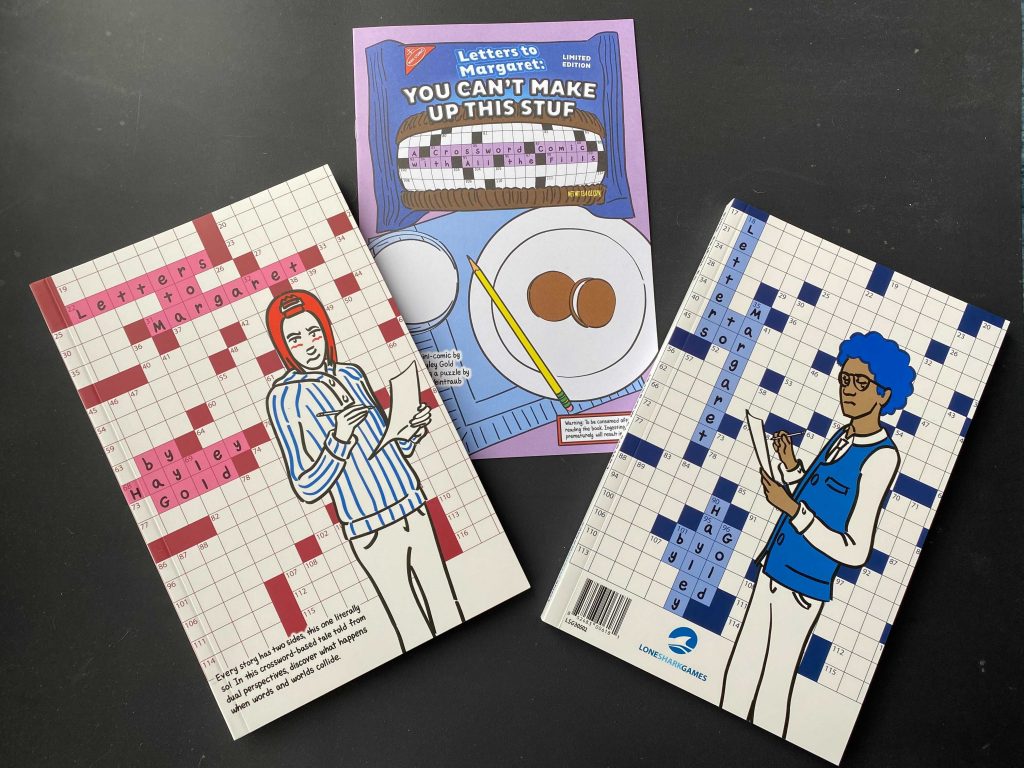 Book alert! Hayley Gold’s graphic novel, Letters to Margaret, is available in both softcover and digital editions here. The Margaret in the title is Margaret Farrar, and the characters include crossword bloggers and an aficionado of a certain cookie. There are some nifty crosswords included in the book, too. The shop offers a mini-comic that’s got a crossword by Robyn Weintraub in it. Check it out! Hayley’s already at work on a sequel to Letters to Margaret that’ll spotlight cryptic crosswords.

I was thoroughly confused by this at first. I thought it was doing one thing but it turned out to be doing another. We’re presented with familiar phrases that start with a number, but the number in the grid isn’t what we’re expecting. Observe: 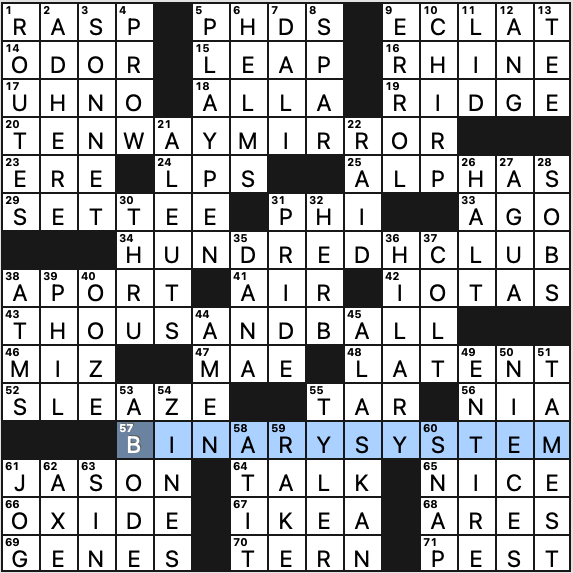 So what’s going on? All is revealed with 57a BINARY SYSTEM [It’s used in computers, and in solving 20-, 34- and 43-Across]. Well, it’s revealed if you know how to count in binary. Thankfully for me, I happened to be the instructor for a computer networking class in the Air Force in a past life, so this came easy for me. Here’s the start of the binary counting system along with the decimal equivalents.

So what was originally a TWO-WAY MIRROR switched to binary to become a 10-WAY MIRROR which looks like a TEN-WAY MIRROR. The same mechanism works with the others. It’s a little convoluted and requires some jumping through hoops, but I enjoyed it once I had the aha moment.

Moving on, the fill is pleasantly clean with PLAYPEN, ALASKAN, ALEUTS, and HILARY Swank leading the way. I can never remember ÉCLAT [Striking show] despite seeing it in previous puzzles. M-W defines it as “ostentatious display” or “dazzling effect.” I don’t recall any other trouble spots. 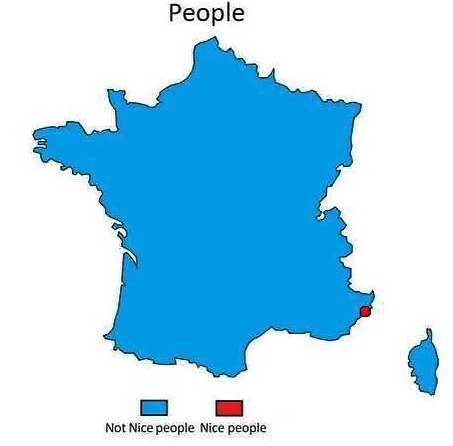 A cute theme. The nerd in me approves. Four stars.

I got to know constructor Rebecca Goldstein a wee bit in a virtual room in last year’s virtual ACPT (and the lack of those rooms in this year’s ACPT was a big reason why I skipped it—being a transplant recipient in a COVID world means I might never be able to attend an in-person crossword tournament again, so I’m hoping that virtual versions of tournaments will continue and offer some social interaction rather than just “here, you can silently watch a livestream of where you’re not.” /soapbox) and I’m excited to see her byline popping up of late. Here, she’s got a truly clever and original theme (and on a Wednesday, no less!), along with some challenging and fresh clues. 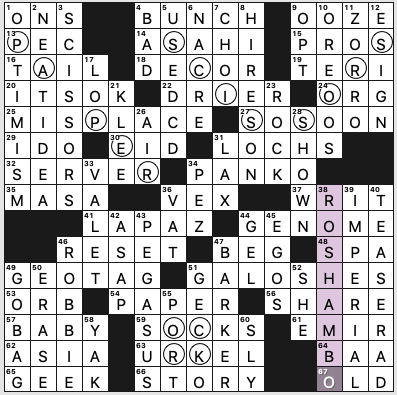 The theme is ROCK, PAPER, SCISSORS, aka ROSHAMBO, and each of that trio appear in the grid a second time, playing the game. 3d [“Cutter”] is SCISSORS and it’s cutting the diagonal/circled PAPER in two. 23d [Breaker”] is ROCK, smashing the circled SCISSORS. 54a [“Coverer”] is PAPER, covering the ROCK circled below it.

The fill is surprisingly smooth for a grid with 17 triple-checked squares offering the visuals. NACRE is basically crosswordese, but fill highlights include OPTIMISM, GEOTAG, PEGASUS, GALOSHES, GO BAG, MASA and PANKO crumbs for some carbohydrates, and Margot ROBBIE.

I struggled at guessing whether 7d. [“Parasite” actor Woo-shik] was CHOI or CHOO, but that busted pair of SCIS/SORS confirmed the I. Choi Woo-shik played the younger male lead in the movie.

4.5 stars from me. Tougher than I was expecting on a Wednesday, but a fun challenge. 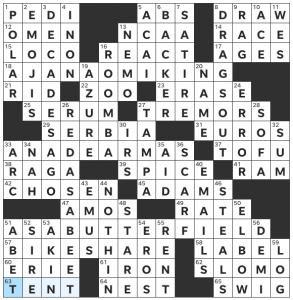 An apt theme today given Ada’s name! (Apologies to all the Avas out there, and also to KJ Apa). These theme answers definitely cover a spectrum of how well known they are. I watched three seasons of How to Get Away With Murder, and I didn’t know AJA NAOMI KING‘s name – I recognized it once I saw it, but I needed nearly every cross. On the other hand, ANA DE ARMAS shows up in approximately every other crossword. ASA BUTTERFIELD is somewhere in the middle of the two. The crosses on all these names weren’t too hard for me, but it is certainly name centric and some solvers might have problems because of that.

The symmetry of this puzzle is all over the place! I didn’t love how closed off the northeast section of the puzzle felt; I was worried that if I got stuck I wouldn’t have a way to get a toehold. However, I did like how many strong longer answers were in the puzzle: DRAGS OUT, BIKE SHARE, DECADES AGO, RED AS A BEET. All the fill today is lovely, my only minor problem is with NOTHIN since I keep parsing it as “no thin” and wondering what it means. 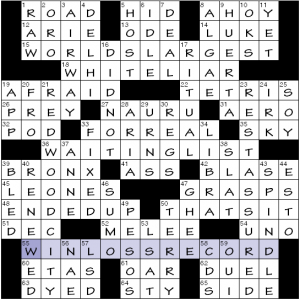 Quickly this morning, by necessity again. 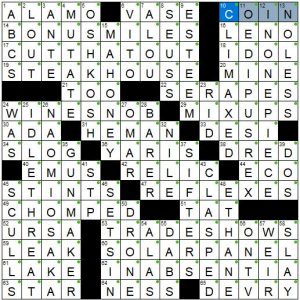 Today we’ve got a Patrick Berry joint that I had trouble getting into a rhythm, but there’s fun stuff throughout. I’ve been lucky lately with my themelesses – I really like when all four corners are similar in geometry – here there are stacked 10s in each, as opposed to two corners with killer stacks and then two relatively cut-off corners.

Building out the middle to accommodate that design can end all sorts of ways — this approach led me to a somewhat disjointed trip through the grid, but the middle was dense with stuff I liked or learned, so can’t complain much.

Highlights for me today were really in the clues: Trivia clues like STP [41d Brand once owned by the Studebaker Corporation], ADA, OMAR, and OSHKOSH were a mix of things I knew and didn’t know; the mental journeys from clue to answers for HEMAN [31a Animated character who exclaims, “By the power of Grayskull!”], IN ABSENTIA, IDLE THREAT, and SIFTER brought a smile to my face; the misdirection for STEAKHOUSE [19a Joint where you might buy a round?] was lovely; and I plain appreciated the cluing angles for NAOMI OSAKA and DOS.

Plus, who doesn’t want to be reminded of the Toyota YARIS? (Don’t answer that) 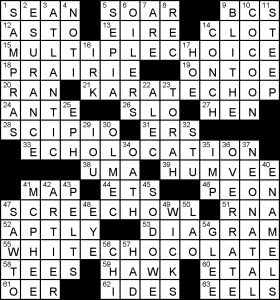 Joe Deeney’s crossword today centres around a one-word thirteen-letter entry: ECHOLOCATION. It’s an unusual choice of revealer, and one that works well in the centre, even if its even length makes for a 14×15 puzzle! The rest of the theme is pretty straightforward: the tetragram ECHO is between the two parts of four entries: [Test format with options], MULTIPLECHOICE; [Dojo move], KARATECHOP; [Nocturnal bird that woke up Vinny in “My Cousin Vinny”], SCREECHOWL (that’s a very specific gratuitous pop cult reference?); [Cocoa butter confection], WHITECHOCOLATE.

My error, like one error at this year’s (online) ACPT was a crossing of US names: I want StAN McVay and TSURANCE. We have outSURANCE here so it didn’t seem a big jump?