I struggled a bit with the top half of this one. I finally got a foothold in the SE and solved upwards, finishing in the NW. Nothing was unfair. I’m not sure if I’m just a bit foggy today or it’s really more difficult than recent FB offerings. 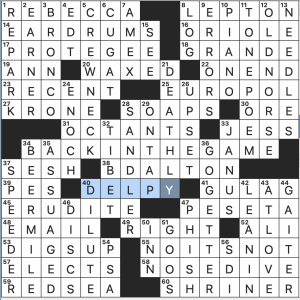 What I didn’t know before I did this puzzle: see above re: Adam Sandler and James Caan. I also did not know that REBECCA never appears in the movie named after her. 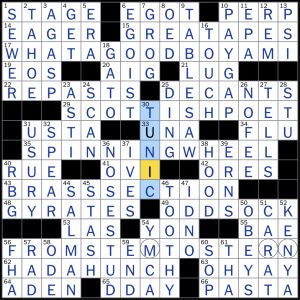 It’s the second collab puzzle in a row for NYT Thursdays, this time from Ashish Vengsarkar and Narayan Venkatasubramanyan.  This one’s sneaky, and I liked the aha moment here:

Each of the clues has a lowercase “m” that, if re-kerned and parsed as the letters “r n” in each clue, makes much more sense:

Theme: “THERE IS NO TRY” (58a, [Yoda’s words following “Do or do not,” and a hint to this puzzle’s theme]).  The other theme entries are familiar phrases except the ending –TRY has been removed. (The quote comes during the scene in The Empire Strikes Back when the old Master Yoda is giving young Luke Skywalker his first real training in the ways of the Jedi.) 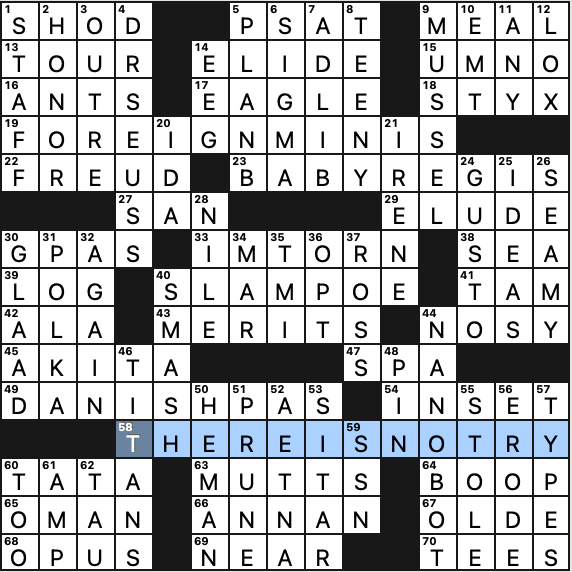 The theme works best when the –TRY ending is the only logical one, as in the second and fourth entries. The first one can also end in –TER, and the third one in just a –T. And calling fathers PAS is just awkward. But other than those nits, I enjoyed the theme and its nerdy basis.

What’s in the fill? For some reason, I like the crossing of DR SEUSS and FREUD. Maybe it’s the two different ways that we pronounce that particular vowel combo that piques my interest. Elsewhere, NANOBOT, “I’M TORN,” TITANS, MUSSE, and GUSTO add a bit of sparkle.

Good morning, friends! Let’s get into it. 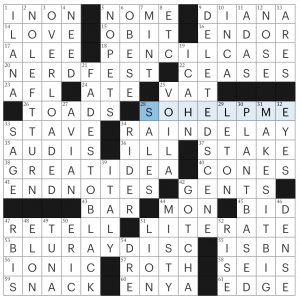 Editor: Erik Agard
Theme: The theme answers are two word phrases, and the middle letter of each word is C 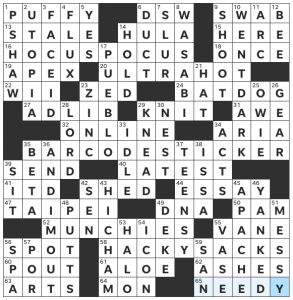 Busy day today so I’m just gonna give a quick rundown of all the things I liked about Matthew’s puzzle!

Theme: Each theme answer substitutes a G-word for a homophonic phrase. 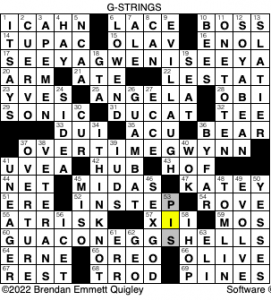 I was curious to see where this would go when I saw the puzzle title, and I caught SEE YA GWEN I SEE YA first, though I wasn’t able to parse the phrase until I said it out loud several times. That part of the theme really clicked when I got OVERTIME GWYNN. As a result, I half-expected there to be another form of GWEN/GWYNN in the third answer. Also – please nobody ever make GUAC ON EGGSHELLS for a second breakfast. I beg you. Lastly, there was a bonus themer in 26d [“What a Micronesian baseball player uses?”] GUAM BAT / WOMBAT that felt very fun but a little out of place within the puzzle as the only Down themer.

In the northeast and southwest corners, there were some fun eight letter answers, including OVERTURE, VETERANS, and, my favorite, ONE TO TEN. I was a bit confused with SOYA BEAN in 12d [“Protein in 45-Down”] (45d [“___ soup”] MISO), as I think SOY BEAN is the more accurate answer here. Someone feel free to correct me.

I spent a lot of time wading through names, which is a general weakness for me. There was Carl ICAHN, TUPAC, OLAV, YVES Tumor, ANGELA Lindvall, King MIDAS, KATEY Sagal, ICE T, ELI Stokols, and Mike TOMLIN. I would say I was pretty 50/50 on these. It was interesting to learn more about YVES Tumor who is an experimental musician and I thought the cluing for MIDAS, 45a [“King in a touching story”], was really fun and clever.

Overall, my favorite clue and answer was 57a [“Number at the top of some faces”] XII. My least was the inclusion of DUI in 33a [“Swerving crime: Abbr.”]. As BEQ might say, I’ll SEE YA GWEN I SEE YA. 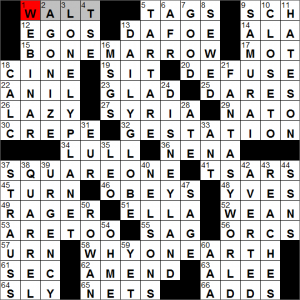 The first thing I noticed in today’s puzzle by Josh M. Kaufmann was the four long down entries. Sure enough today is a “revealer explains the theme better when themers run down” day, with the punchy [Head-scratching words…], WHYONEARTH explaining a synonym theme with a twist. Each of the four downs end in a synonym for EARTH preceded by a Y. So: [Big name in travel guides], LONELYPLANET; [Newspaper rival of the Bugle in the Spider-Man universe], DAILYGLOBE; [Anaheim attraction], DISNEYLAND; [Oz, for one], FANTASYWORLD.