Theme:  The ends of each theme answer form a word that can follow “loose”. 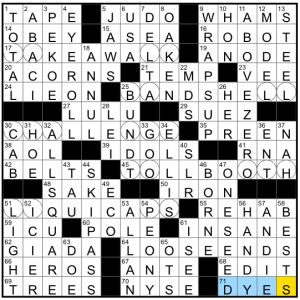 Solid, classic Monday theme today. LOOSE ENDS is a clever revealer, and having the “ends” refer to the outside edges of the word rather than just the ends made the theme type feel a bit less stale. Also, having six theme answers is impressive, especially when a constructor is trying to keep the fill Monday level clean.

For me, there were hits and misses for both the base phrases and the “loose” phrases. TOLLBOOTH and BAND SHELL were my favorites (although TOLLBOOTH does commit the cardinal sin of having a second valid parsing – the first O in BOOTH could have been circled rather than the one at the start). I didn’t know what LIQUICAPS were, but I puzzled it out. I also thought the clue on CHALLENGE could have been better – [Stiff test] is both very vague and feels like a phrase no one says? The “loose” phrases were nice except for “loose talk”, which I had to ask my mom what it meant. Overall, this puzzle felt a little old-fashioned and there wasn’t too much that stood out to me,  but there also wasn’t much to be upset by. A solid offering all around.

Hope everyone is having a happy holiday weekend!

Our theme today features familiar phrases whose final words are also forms of precipitation, increasing in intensity as we go down the grid. 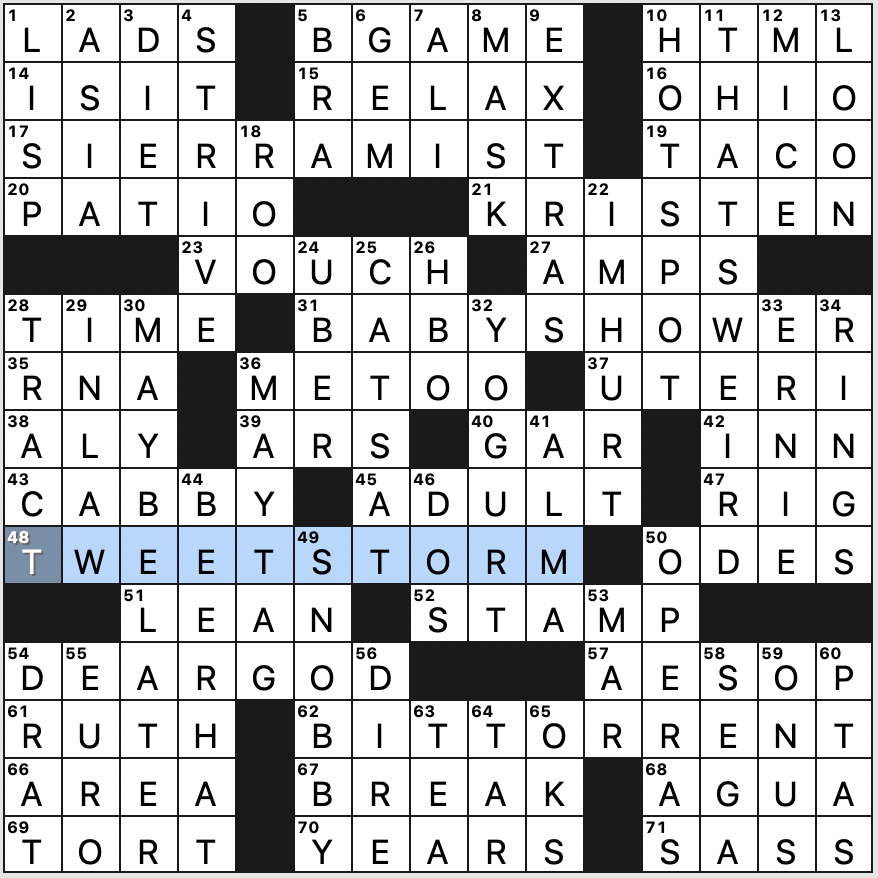 When I got to TWEETSTORM I was wondering what the final entry would be. I wanted it to be something HURRICANE or something MONSOON. But I was surprised by the actual entry. I like it as an entry and have used BITTORRENT before, but I’m not sure it fits here. (If you don’t know BITTORRENT, it’s been around for 20 years now and still remains a popular method for transferring large data files over the internet.)

To me, a torrent has more to do with flowing ground water than precipitation. Yes, you can say, “The rain was coming down in torrents,” or “A torrent of rain poured down.” But that feels more localized whereas the other words describe larger systems? Wait. That doesn’t seem right.

On second thought, maybe it’s STORM that’s the outlier. The other words specifically define the intensity of rainfall whereas STORM also encompasses wind and may or may not in fact involve precipitation. I would think something RAIN would be a better answer here (if it exists). What’s the difference between showers and rain, you ask? The National Weather Service has that answer.

And that’s all I have. We had beautiful weather on Easter Sunday, but Monday’s bringing 100% chance of rain to the South Puget Sound region. Hope you’re staying dry out there! 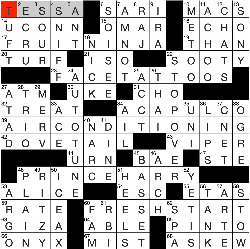 First Monday under Patti Varol’s editorial byline! Long may she reign, and methinks today’s choice of theme is no accident.

Heading down to the revealer at 60A [New beginning, and what the first words of the answers to the starred clues can literally have] … phew, that was a long clue … it’s FRESH START, meaning that each theme entry’s first word can be placed after FRESH to create a new phrase. But also, LAT quite literally gets a fresh start today with the official editorial transition.

Joseph A. Gangi’s Universal crossword, “Having It Both Ways” — pannonica’s write-up 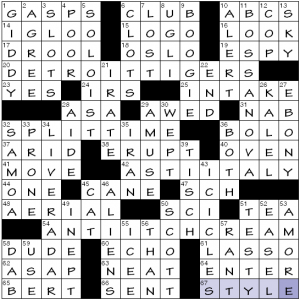 I stayed away from the website this morning because there was a security issue warning. Turns out it had something to do with a recent certificate renewal. All is okay now.

The title helps to coalesce the theme, which was kind of perceptible. These are all phrases with the letters I and T doubled near the center. In the top half, the first part ends in -IT and the second begins TI-. We have the inverse for the other two, with the first ending in -TI and the second beginning with IT-.

So that’s a fun little theme. 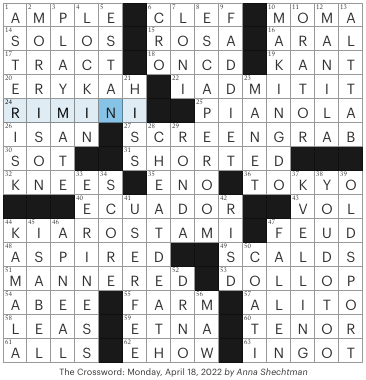 Overall, this didn’t feel nearly hard enough to be a “hardest of the week” Monday TNY puzzle, but I was stymied by the crossing of a Spanish verb’s conjugation and an Italian place name I might have gotten if I’d read the clue more carefully. Somehow I thought I was looking for some Italian person’s name? And ESTAS and ESTAR didn’t fly; didn’t know ESTAN was a plural conjugation of “to be,” nor did I know the Shakira album title. Have heard of RIMINI, but [Resort city on the Adriatic where Federico Fellini was born] somehow undid my brain. I also misread the PLAYMATE clue and made it a PLAYDATE, which meant RIDI*I looked completely unknown. Oops. Pro tip: When solving crosswords, make sure to read the clues!

Fave fill and clues: MOMA with a trivia clue (didn’t know a couple Monets were damaged in a 1958 fire there), painter ROSA Bonheur (MANET is here too), “I ADMIT IT,” SCREEN GRAB, filmmaker Abbas KIAROSTAMI (somehow I find the spelling super-easy to remember), a DOLLOP of sour cream, a censorship ASTERISK (as in “f*** that one crossing!”), Toni MORRISON and ISABEL Allende, KAMALA Harris, CHEAT DEATH, ESCAPE ROOM, MANILA with a jeepneys clue, MAKING DO (but not the overlap with “YOU DO TOO“), and KVELLING. The Brian ENO quote clue was a hoot: [Composer Brian who said, about NFTs, “How sweet—now artists can become little capitalist assholes as well”].

Not keen on APNEAL (apneic is the adjective used in medicine).

Wondering what more comedian and TV host LONI Love needs to do to displace Loni Anderson in crossword clues. Anderson has apparently worked plenty since her heyday about 40 years ago, but I honestly had no idea she’s been on that many TV shows since WKRP in Cincinnati ended. I know Love primarily from her guest judging appearances on RuPaul’s Drag Race, but she also cohosted a daytime talk show for years. 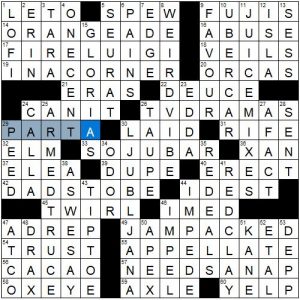 Really tough sledding to get going today, and then it all cleaned up quickly enough.

New to me: FIRE LUIGI [17a Video game character that has captured a flower], SESS [13d Marijuana strain], and DRAX [48d “Moonraker” villian]. This all says much more about me than the puzzle. I got LJUBLJANA [30d Slovenia’s capital] quickly (thanks, Sporcle!) so not sure whether I actually know SOJU BAR [33a Place to drink Korean spirits] or I just had a plausible (and ultimately correct) guess. 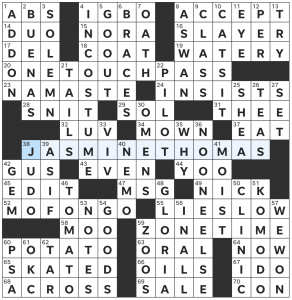 Good morning folks! Today’s puzzle has NET within its three theme answers– ONE TOUCH PASS, JASMINE THOMAS, and ZONE TIME. They are also all sports-related– nice! I briefly lived in Italy, where I learned they call give-and-gos “dai e vai”s which I love a lot. (It’s just the direct translation.)

I’ve had MOFONGO twice now but I’m not a fan. I like my plantains fried, please– chips, tostones, maduros, fries, etc etc. TOMATO crossing POTATO was kind of fun. Oh, worth noting that I didn’t finish this puzzle– I had “player” instead of SLAYER, because I hadn’t heard of the game or the city (ASWAN). Okay, I’ve been writing this while I wait for my unit tests to build, and I have just been notified that they have failed, so I gotta run.